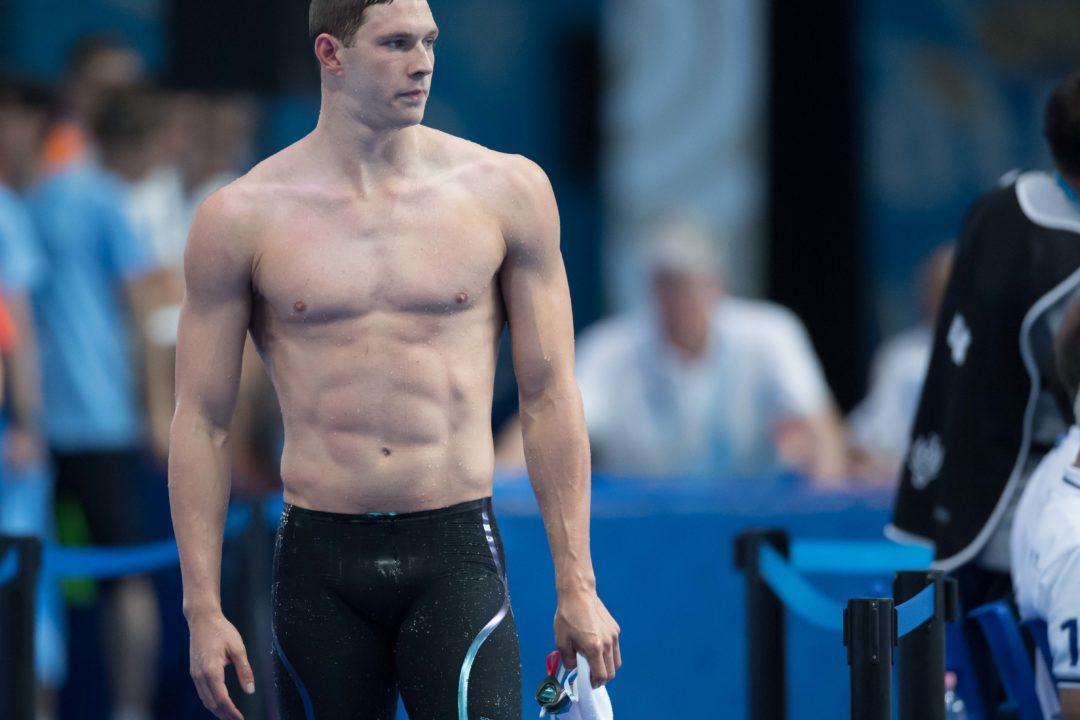 Day 2 finals saw a surge of British talent take over the momentum in the form of Adam Peaty and Ben Proud each winning a gold medal. Countrymen Duncan Scott and James Guy have a chance to rake in more hardware for the Brits if they can put a winning race together in the men’s 200m freestyle, if they can get past China’s Sun Yang and America’s Townley Haas tonight, that is.

American powerhouse swimmers Ryan Murphy, Matt Grevers and Katie Ledecky will also be among the stars n’ stripes squad taking to the Danube Arena pool, with Ledecky pulling a double of the 1500m and 200m freestyle events. And we’ll see the primetime battle between Lilly King and Russia’s Yuliya Efimova come to a head in the 100m breaststroke final to close out the evening’s session.

Sun Yang of China took his time in this super tight men’s 200m freestyle race, waiting until the final turn to crank out the speed and takeover the race. Splitting 51.10/53.39, Yang nailed a gold medal-winning time of 1:44.39 to score the only sub-1:45 mark of the field. Sun already won the men’s 400m free at this competition and will also be tackling the 800m and 1500m races.

With his performance, Sun overtook Ryan Lochte as the 6th fastest performer of all-time, collecting an Asian Record with his win tonight. His previous personal best headed into this meet was 1:44.47.

Post-race, Sun stated, “It was a great race, especially the last 50 meters were pretty good. It is one of the hardest races for me.”

Right behind was a tough fighter in American Townley Haas, who hung with the pack and broke out in the final 25m to take silver in 1:45.04, just .01 off of his own personal best. This is Haas’ 2nd medal, as the Texas swimmer was an integral member of the men’s 4×100 freestyle relay that won gold.

Russia’s 22-year-old Olympic finalist Aleksandr Krasnykh was the bronze medalist in this race, finishing just .19 away from Haas in a final time of 1:45.23.

The British boys of Duncan Scott and James Guy, who entered tonight’s final as the 1-2 seeded swimmers, fell off the pace tonight, finishing 4th and 5th. Scott was just off his semi time of 1:45.16 to clock a final time of 1:45.27. Guy, the defending 200m freestyle world champion, settled for 5th in a mark of 1:45.36, not too far off his own national record of 1:45.14. By the way, this is the first time Scott, an Olympic finalist in the 100m free, has contested this event internationally.

As a surprise to no one, American Katie Ledecky scorched the women’s 1500m freestyle field, taking gold in a time of 15:31.82, the 4th fastest performance of all time. This is Ledecky’s 3rd consecutive world title in the event, having won in both Barcelona and Kazan. Ledecky has already wrangled in gold in the women’s 4×100 freestyle relay, as well as a gold in the 400m free, so the Stanford swimmer is well on her way to a record-setting haul here in Budapest.

This win marked Ledecky’s 12th world championship victory, the most of any female, only sitting behind Michael Phelps (26 medals) and Ryan Lochte (18). And Ledecky isn’t even done for this session, taking on the first semi-final of the 200m freestyle coming up in less than an hour.

Finishing 19 seconds later was Spaniard Mireia Belmonte, the 200m fly Olympic champion. Belmonte wasn’t able to compete at the 2015 World championships in Kazan due to a shoulder injury, so this race was a redemption of sorts for the national record holder. 15:50.89 was the time Belmonte clocked tonight, clearing a new Spanish record and checking in among the world’s top 10 performers of all-time in the race.

Adam Peaty has lowered the 50m breaststroke World Record for the 2nd time in one day, taking his 26.10 from this morning all the way down to 25.95. With his explosive race, Peaty becomes the first man ever to drop under the 26-second barrier in the event. He is the king of breaststroke here in Budapest thus far, having easily won the 100m event last night.

Said Peaty after the race, “It was not really in my radar to swim below 26 seconds, but I felt good tonight. Let’s see what comes out tomorrow.” That’s just plain scary right there.

At this rate, Brazil’s Felipe Lima will battle South Africa’s Cameron van der Burgh for silver, after VDB earned an African record this morning. He was just .10 slower tonight, but still in fine form to land on the podium.

Cody Miller of the U.S. was shut out of the final, but Kevin Cordes, the 100m silver medalist here, will be in the hunt tomorrow night. Russia’s Kirill Prigoda also lowered his own Russian record with his 4th place finishing 26.85, so he’s riding a wave of momentum as well.

Just minutes after Brit Adam Peaty brought the house down, Canadian Kylie Masse shook the Danube Arena with an outstanding new World Record of her own. Splitting 28.51/29.59, Masse was able to shave .02 off of the long-standing WR held by Gemma Spofforth of 58.12 since 2009 to take gold here tonight. Masse just earned Canada’s first World Championships gold since before 2007 and the nation’s first-ever women’s 100m back gold.

USA’s Kathleen Baker, the silver medalist in this event in Rio, was just .01 off of her own personal best time to claim the runner-up position behind Masse. The Americans were shut out of the medals in Kazan, so Baker was able to snap a possible two-in-a-row streak in the 6th fastest performance by an American in history.

Australia’s Emily Seebohm was right in the mix as well, touching only .01 behind Baker in 58.59. Seebohm holds the Australian national record in 58.23 from London Olympics.

The top 5 finishers were all under the 59 second mark.

In an incredibly close race, the top 3 men all finished within .15 of one another, led by China’s Xu Jiayu. He entered this meet with the #1 time in the world (51.86) and delivered on that potential here, spitting 25.12/27.32 for gold in a final time of 52.44. Right behind, however, was a battle for silver, with the two Americans in the race doing their best to catch Xu before the 50m ran out.

Defending world champion Mitch Larkin of Australia wound up in 6th place with a time of 53.24, off the podium. He’ll contest both the 50m and 200m backstroke races later in the meet.

The women’s 200m freestyle semi-finals was a tale of 2 races, as the first 8 women fired off quick swims, while the 2nd heat was a little on the sluggish side. All told, just two women were under the 1:55 mark, led by American Katie Ledecky, less than an hour after her gold medal-winning 1500m freestyle. Her time of 1:54.69 is the 5th-fastest performance by an American.

On-fire Australian Emma McKeon is going after her 3rd medal here in Budapest, having already won silver on the 4x100m free and silver in the 100m fly. McKeon’s time tonight of 1:54.99 is her 2nd best ever and sets the Brisbane-swimmer up nicely to challenge for the gold.

Russia’s Veronika Popova was also in that first heat, clocking 1:55.08, hacking .85 off of her previous personal best of 1:55.93 to check-in with a new national record.

Another national record fell by way of 6th seeded Siobhan Haughey of Hong Kong. Her time from this morning of 1:56.62 was Hong Kong’s best-ever time from a female, but the Michigan Wolverine-trained athlete lowered that time even further, taking it to 1:56.21 tonight.

Two Japanese and two Hungarians made the final, led by Olympian Daiya Seto. The 23-year-old nailed a new personal best time of 1:54.03 to take the top seed. His countryman, Masato Sakai, was a quiet swimmer this morning, notching 1:55.57 for the 7th seed, even though he’s carrying more than one 1:53-point into this competition. Sakai won the silver medal behind Phelps in Rio in this event.

Laszlo Cseh is the definition of a seasoned racer, with the 31-year-old taking the 2nd seed comfortably in 1:54.22, with Tamas Kenderesi just behind in 1:54.98.

South African Chad Le Clos, who bowed out of the 200 free event to reportedly focus on his 200 and 100 fly races, was under world record pace at one point, only to severely tighten up in the last 20m. He’ll need to manage his energy a tad more efficiently in the final to combat the roaring crowd behind the Hungarians.

USA’s Jack Conger was a solid performer, claiming the 5th seed in 1:55.30. Teammate Pace Clark finished in 9th, just out of the final.

The highly-touted battle between American Lilly King and Yuliya Efimova of Russia came to fruition tonight, with the American scorching a new World Record of 1:04.13. That shaved a cool .22 off of Lithuanian Ruta Meilutyte’s record of 1:04.35 from back in 2013.

King’s opening 50 of 29.80 matches the 4th fastest 50 breast ever produced, and the Indiana Hoosier held on to clock 34.33 on the back half to crush the monster time of 1:04.13. Right behind her was teammate Katie Meili, who also shut down Efimova with her time of 1:05.03. That hacked .45 off of her previous personal best of 1:05.48 to overtake Leisel Jones as the world’s 6th fastest performer all-time.

Efimova still landed on the podium with a bronze, just .02 off of Meili’s time. She kicked off the race with an opening split of 30.34, but slowed to a 34.71, not being able to make up the necessary ground to catch the Olympic gold medalist King. Compare that to Efimova’s semi-final swim of 1:04.36, where she was able to go out in 30.67 and still bring it home in 33.69.

This session is going to ROCK.
Plus, I will have a delay in my Finals live watching both tomorrow and Thursday. 🙁

this is a heavy weight session of semis and finals ?

And aside from the women’s 200 IM, the meet has been largely devoid of massive upsets and surprises. I’m expecting some STUFF to go down this evening.

This may be the session of the week in terms of upsets, surprises, WR’s, etc. Should be wonderful!

Oi Ervin, can you hook me up with a link to the hungarian stream? 🙂

OMG. This works at work! I am shocked it is not blocked. Thank you!