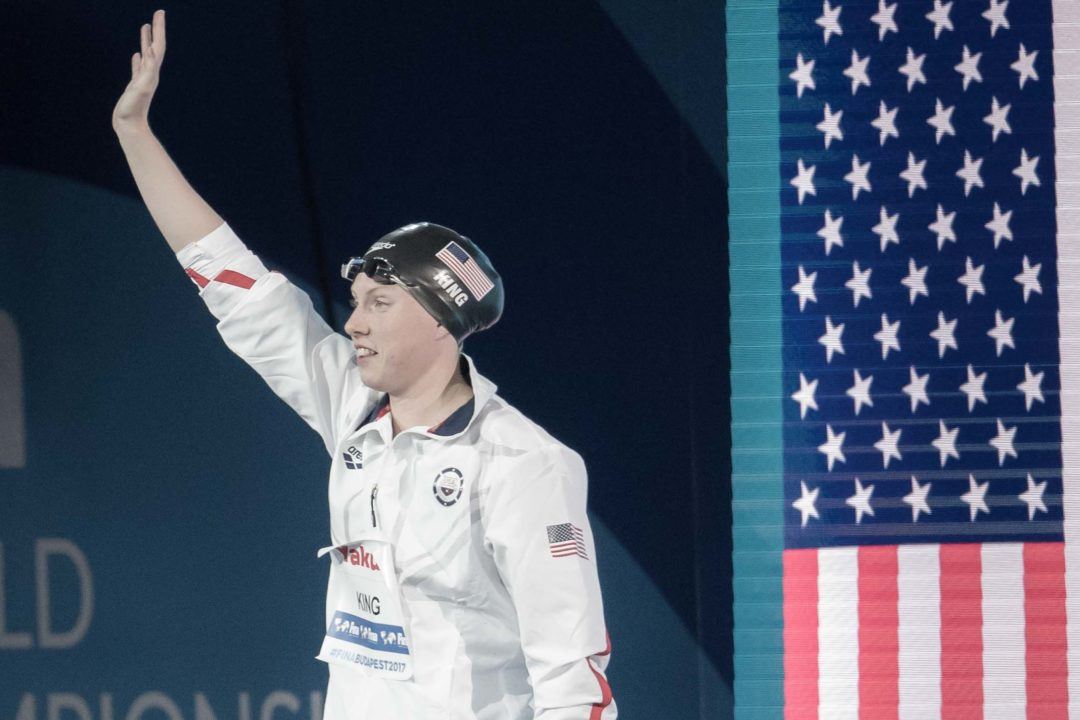 Watch as USA's Lilly King breaks the World Record in the women's 100m breaststroke, as she blazes to a 1:04.13 to win the title in Budapest. Current photo via Mike Lewis/Ola Vista Photography

Olympic champion Lilly King is now World champion and World Record-holder. Watch the video below as she blazes to a 1:04.13, taking 0.22 off the previous mark of 1:04.35 set by Lithuanian Ruta Meilutyte at the 2013 World Championships. King shot out to the lead with a sub-30 first 50 meters, then brought it home in a quick 34.33. Katie Meili, with the second-fastest back half in the field (34.56) slid past Yuliya Efimova to take the silver medal.

The highly-touted battle between American Lilly King and Yuliya Efimova of Russia came to fruition tonight, with the American scorching a new World Record of 1:04.13. That shaved a cool .22 off of Lithuanian Ruta Meilutyte’s record of 1:04.35 from back in 2013.

King’s opening 50 of 29.80 matches the 4th fastest 50 breast ever produced, and the Indiana Hoosier held on to clock 34.33 on the back half to crush the monster time of 1:04.13. Right behind her was teammate Katie Meili, who also shut down Efimova with her time of 1:05.03. That hacked .45 off of her previous personal best of 1:05.48 to overtake Leisel Jones as the world’s 6th fastest performer all-time.

Efimova still landed on the podium with a bronze, just .02 off of Meili’s time. She kicked off the race with an opening split of 30.34, but slowed to a 34.71, not being able to make up the necessary ground to catch the Olympic gold medalist King. Compare that to Efimova’s semi-final swim of 1:04.36, where she was able to go out in 30.67 and still bring it home in 33.69.

This entire series has been so great to watch.

all dopers at this meet need to have their swims marked with an asterisk – Efimova, Sun, Cielo, Park, and others I may be unaware of.

Santos tested positive for the same thing as Cielo

There are a ton you are unaware of. Many of these athletes are cheating behind the scenes and not getting caught. It’s not terribly hard to get away with it. Some of these swimmers literally cheat ON CAMERA at these meets to get a competitive advantage

you mean like Miller? yes there are cheaters that way. But it is almost impossible for the judges to catch this type of cheating.

I think youre catching on. It’s not a ton different outside of the pool.

Lol are you trying to equate PEDs to a couple of kicks? Seems like you’re just trying to rationalize that your favorite swimmer is a drug cheat

I don’t have a favorite swimmer because I’m not a 10 year old. I just respect the sport and the athletes in general. I’m also not naive enough to believe that the only “cheaters” are the ones that have tested positive. Also, my main point is that some of these swimmers cheat with a camera on them. Isn’t that kind of telling what they could do without a camera on them? There are definitely clean athletes here, but the cheats arent just coming from Russia China and Brazil

You are absolutely correct, Swimmer, spot on!!!

Ridiculous. Cody Miller has performed at every level and hasn’t been dq’d. He is a great swimmer who made the team honestly. IF he has a technical flaw, the world class judges don’t agree with you. I’m sure you would do it better…. or maybe would not. And it does not compare to doping.

Except he has been DQ’d, and several times: 2013 NCAAs final, 2016 Orlando Arena Pro Series, and, most importantly, the 400 medley relay at the last SCM worlds for dolphin kicks.

I feel like this conversation is focusing too much on Cody miller, which was a minute point. The main point is that people are always seeking a competitive advantage, and a lot of them go down the route of taking banned substances, or pushing the limits of “legal” substances (also even so far as to cheat with a camera in the pool). A lot more people are doing this than you would like to believe.

I completely believe it. It’s the history of sports. Marion Jones, Lance Armstrong, Bonds/McGuire/Sosa/Palmeira/Giambi, Tyson Gay, and I could go on and on. We Americans are known for it. And as long as there are TUEs and unscrupulous doctors, there always will be cheaters. Granted, most TUEs are legit, but I’m sure some aren’t.

Race of the meet thus far. The only thing better than world-class swimming is when it’s couched in a heated rivalry. King has GUTS.

No guts, no glory.