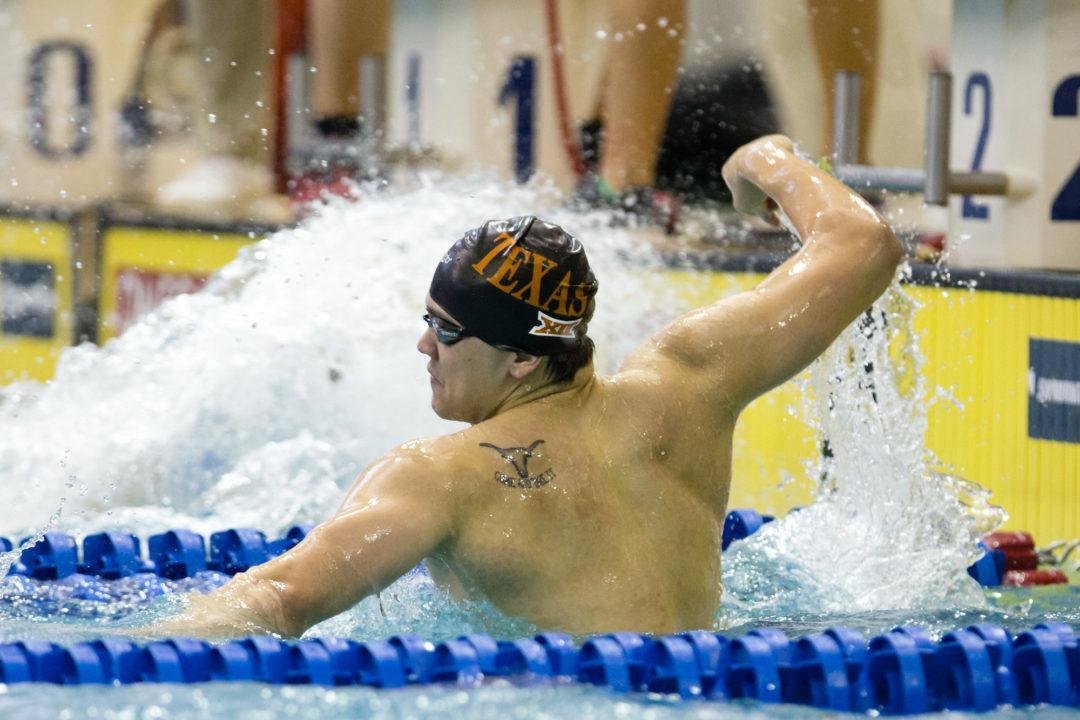 As in previous years, SwimSwam’s Power Rankings are somewhere between the CSCAA-style dual meet rankings and a pure prediction of NCAA finish order.... Archive photo via Tim Binning/TheSwimPictures.com

All 48 NCAA points have graduated thanks to Brandon Fiala and Robert Owen. But VT recruited well and has a knack for helping less-known prospects blow up. Plus diving could keep them afloat.

IMer Paul DeLakis is a massive recruiting get and fills the versatility hole left by graduated Matt McHugh. But outgoing diver Colin Zeng is the most painful loss in Columbus.

Tennessee has got a potentially stellar distance group… if everyone can stay healthy. That hasn’t been the case for the last few years, though. Sam McHugh is an all-around animal. Joey Reilman had a nice summer and Peter John Stevens has much more scoring potential than he showed last year. Though we don’t focus much on diving around these parts, incoming transfer Colin Zeng is a huge addition.

Felix Auboeck had a great summer and could be in the mix for multiple NCAA titles. Jacob Montague continues his meteoric rise, and the team still has freestyle prowess in Paul Powers (sprints) and PJ Ransford (distance).

Graduation hit the Tigers particularly hard in breaststroke and IM, but the sprint group is still loaded. Zach Apple is getting better at a scary rate, and Peter Holoda is still legit. Spencer Rowe should be an impact freshman in filling the breaststroke gap.

Purdue is pretty diver-centric right now, but it’s hard to diminish that impact after 94.5 diving points last year. Steele Johnson is the best college diver in the nation. Plus breaststroker Marat Amaltdinov should score individually and could be good enough to drag a couple relays to NCAA invites.

In a weak breaststroke field, there’s a thought that Mauro Castillo Luna could be an NCAA title contender. The team doesn’t graduate any of its individual NCAA scorers from a year ago, and diving doesn’t hurt, either.

Louisville didn’t lose many individual NCAA points (outside of top scorer Grigory Tarasevich), but relays will be where the team really feels the sting of graduation. There are still some great pieces (breaststroker Carlos Claverie, flyer Zach Harting, distance man Marcelo Acosta), but the Cards will have to hope versatile freshman Nicolas Albiero comes along fast enough to fill in some gaps.

It’s a really distance-based roster that won’t be much of a relay threat. But Akaram Mahmoud/Fynn Minuth make up one of the NCAA’s best distance duos and Brazilian import Brandonn Almeida might end up being the second-best freshman in this entire class.

Cameron Craig and Grant House make up a scary (and young) relay core. Some major relay pieces graduate, so the Sun Devils’ standing depends heavily on how fast their developmental relay prospects beyond the Big 2 develop.

It’s not so much that Alabama got better – it’s more that most of last year’s #8-10 teams got worse and ‘Bama got worse slower. Graduating Connor Oslin and Anton McKee is devastating. There are some good sprint pieces left though: Luke Kaliszak, Laurent Bams and Zane Waddell are all impact swimmers and getting better. This recruiting class seems like a sleeper pick to have major impact, with two 20.0/44-second sprinters and a bunch of developmental breaststrokers.

UGA’s gotta reload without Chase Kalisz, Pace Clark and Taylor Dale. Camden Murphy is the best fly prospect in this class, and the IM group is still in great hands with Jay Litherland and Gunnar Bentz. The relays will again lean heavily on Javier Acevedo, the team’s only true sprint power.

Abrahm Devine is coming off of a breakout summer and leads an IM group that adds two freshman 1:46s. The distance group could be nasty between Grant Shoults, Liam Egan and True Sweetser plus incoming top-20 freshman Matthew Hirschberger. It’s not the most well-rounded team yet, but Stanford is accumulating talent and depth at levels it hasn’t seen in years.

Blake Pieroni is the real deal and elevates every relay on this team. He leads a burgeoning sprint group that adds two big Croatian talents: Bruno Blaskovic and Nikola Miljenic. They’re both more drop-dead speedsters for now, but these Hoosier relays have a chance to be deadly over the coming year.

The pieces are here for this team to do something special. Dylan Carter had a massive junior year. Santo Condorelli was a bit more lackluster, but has the ability to be one of the nation’s top sprinters. Carsten Vissering could take advantage of a weak breaststroke field for big points. And the backstroke group adds international star Robert Glinta to current senior Ralf Tribuntsov. Plus watch this recruiting class, which adds 1:34.7 and 1:36.6 200 freestylers to a group that already includes Carter, one of the fastest men in history in the event.

Justin Ress is the talk of town after an outstanding summer. He joins Olympian Ryan Held on relays that graduated some key pieces but could reload in a hurry with Italy’s Giovanni Izzo (who has split 21 on a long course relay) and the hyper-versatile Jacob Molacek. Molacek is probably the highest-impact transfer this season and should solve NC State’s breaststroke woes while also being a free relay machine.

Caeleb Dressel was the best swimmer in the NCAA last spring and the best swimmer at Worlds this summer (on the men’s side, at least). Maxime Rooney already looks good and this team is loaded in the IMs. Getting arguably the best freshman backstroker in the nation (Michael Taylor) is gravy, and it sets up Florida to have five elite relays – if they can find a breaststroker.

Ryan Murphy out, Ryan Hoffer in. There’s no better way to ease the loss of an Olympic champ and world record-holder. Hoffer is the most impactful newcomer to the NCAA this year with potential to elevate any of the five relays. Cal supplemented him with the nation’s best recruiting class, including four men under 1:36.4 in the 200 free. The backstroke group has cleared out a little, but the sprint group is quietly one of the NCAA’s best between Hoffer and last year’s rookie sensations Michael Jensen and Pawel Sendyk. Oh, and don’t forget Andrew Seliskar, the all-world prospect who finally gets to step into the spotlight with Murphy gone.

Can’t argue against Texas, even with some key graduations. Joseph Schooling should be back and better than he was a year ago (and he still scored 33 points in an “off” year). John Shebat is the new NCAA leader in both backstrokes. Townley Haas is still crushing 200 frees and then crushing post-race interviews. And the incoming class includes top-tier backstroker Austin Katz and the versatile and fast-rising Sam Pomajevich. Plus three guys 1:36.0 or better in the 200 free.

Will these rankings change after this weekend’s meets? I know Notre Dame beat Louisville on both men’s and women’s sides.

Curious – We’ll likely put out another set of rankings going into the fall invites in a couple of weeks. While this was a great win for Notre Dame, we’ll have to see at that point if any of their swims indicate a big jump in points at NCAAs – remember that unlike the CSCAA, our rankings are NCAA focused.

Arizona State had its intrasquad meet Friday. There were at least seven NCAA “B” qual times including an impressive 1:35 200 free by Cameron Craig

Y’all need to watch out for duke next year ?

Braden, why are you so high on Stanford? I’m interested to hear your reasoning because I think they’re going to outperform expectations as well

One year removed from a top 10 team and these are my thoughts.

I think the top 7 are a class above the rest.

Texas still looks like the class of the field assuming they find a breastroker and Shebat rebounds after not his best summer. Essentially in EDDIE WE TRUST.

They are followed by Cal with a slight advantage over Florida in my book, but not by much. Mike Taylor rebounding after not competing will be the game changer for Florida.

I think NC State is fourth, but a little more vulnerable. Have to see how not having DeSorbo shakes out. ALOT of talent tho.

I really think that NC State can over take Florida this year. Justin is on fire from this summer and I think that will only carry over to this SCY season. Then their Freshman class is pretty good, but what NC State does with their freshman is always very impressive. It will be a very exciting meet and I cannot wait to watch!

Cal always has to deal with the double taper or no taper since their conference is generally two weeks before NCAAs They may have to sacrifice a conference title to do well at the big dance. Texas has no conference to swim for and can go all in at NCAAs.

Such an unfair advantage, their c team could win the conference