The Most Wide Open Events At The 2017 FINA World Championships 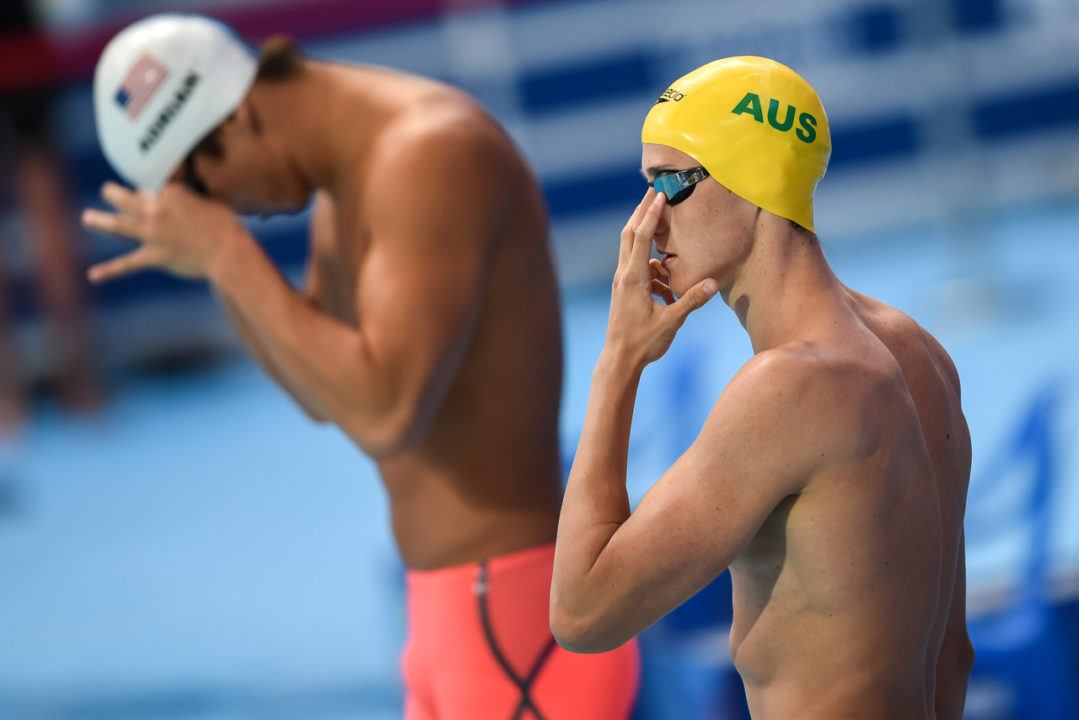 Check out a breakdown of some of the more 'open' races at the 2017 World Championships. Archive photo via Peter Sukenik/www.petersukenik.com

Before World Championship swimming action begins on Sunday in Budapest, there are some events where we know who’s going to come out on top, barring a disqualification or something of the sort. Such is the case in the women’s 400, 800 and 1500 freestyles, where Katie Ledecky reigns supreme, the men’s sprint breaststroke events featuring Adam Peaty, and the women’s sprint fly events where Sarah Sjostrom is dominant.

However, there are a few events that are relatively wide open. Out of events on the Olympic program, there are five that won’t feature the reigning Olympic gold medalist, with three of those missing the 2015 World Champ as well.

Let’s start with the men’s sprint freestyle, where we’ve seen four different gold medalists over the last two years in Kazan and Rio, but none of them will be in competing.

Frenchman Florent Manaudou won the 50 free crown decisively in 2015 by nearly two tenths. He was then upset by American veteran Anthony Ervin in Rio by one one-hundredth of a second, and opted to take a break from the sport for a while. However, he will be in Budapest to commentate.

Ervin on the other hand missed the U.S. team at their Trials, opting to put all his eggs in the 50 free basket only to miss by two tenths placing 6th.

With those two out, the event becomes a relatively wide open one. Great Britain’s Ben Proud is a leading candidate for gold after blitzing to a world-best 21.32 in April, faster than Ervin was for gold last summer.

2015 silver and 2016 bronze medalist Nathan Adrian is in the mix, but his renewed focus on the 100 seems to have taken away a bit of his speed. His teammate Caeleb Dressel will be a major player after going 21.53 in June, as will Russian Vladimir Morozov who’s in between Proud and Dressel in the world rankings at 21.44. Also returning is 2008 Olympic champ, three-time World Champ and world record holder Cesar Cielo of Brazil, who qualified with a 21.79 in May after missing his home Olympic Games, though he hasn’t done anything recently to suggest he’ll contend for gold.

The same is the case in the men’s 100 free, as 2016 Olympic gold medalist Kyle Chalmers withdrew from Worlds to undergo heart surgery, and 2015 World Champion Ning Zetao was left off the Chinese team after failing to make the FINA ‘A’ cut, citing a waist injury.

This event will also be missing Canada’s Santo Condorelli, who had back-to-back 4th place finishes in Kazan and Rio.

Even with Chalmers, Ning and Condorelli competing, this event would still be considered one of the more ‘open’ ones on the male schedule. Chalmers’ Australian teammate Cameron McEvoy was the odds-on favorite to win in Rio after blazing to a 47.04 earlier in the year, but wasn’t able to approach it at the Olympics.

The Olympic final became an incredibly close one, with Chalmers’ uncontested back-half speed enough to get him the gold by a little over two tenths in 47.58. Behind him you had three guys at 47.8, two more at 48.0, and then McEvoy 7th in 48.1.

It’s going to be another tight final this year with four men already under 48 seconds: McEvoy, Adrian, Dressel, and world #1 Duncan Scott at 47.90. It’s all about who can deliver on the day of the final.

We all know Michael Phelps isn’t competing in Budapest, leaving the reigning Olympic champ out of the 200 fly & 200 IM lineups.

The 200 fly was expected to be a three-man race in Rio, but Japan’s Masato Sakai and Hungary’s Tamas Kenderesi managed to take the expected spots of Chad Le Clos and Laszlo Cseh on the podium alongside Phelps with big swims.

The race is relatively wide open between those four, plus Sakai’s teammate Daiya Seto and potentially American newcomers Jack Conger and Pace Clark who find themselves ranked 5th and 6th in the world. The hometown Hungarians will be expecting at least one if not two medals in this, especially considering world #2 Kristof Milak won’t compete for them in this event, adding expectations on Cseh and Kenderesi.

Like the sprint free events, the 200 IM won’t have either the Olympic or World champ swimming with Phelps retired and Ryan Lochte unable to compete at Trials due to his suspension. Phelps won four consecutive Olympic titles, and Lochte won four consecutive World titles (and Phelps won the three before that), so this event is the most open it’s been in 15 years in that sense. For the first time since 2001 someone not named Phelps or Lochte will reign supreme in the men’s 200 IM.

Kosuke Hagino defeated the Americans to win the 2014 Pan Pac title (though Lochte swam an identical time from the B-final), and took silver last summer in Rio. He’s the third fastest of all-time at 1:55.07, and would’ve given Lochte a good run in 2015 had he not missed the meet with an injured elbow.

He’d have to be considered the favorite, but China’s Wang Shun will challenge after back-to-back bronze medals, and Germany’s Philip Heintz announced himself as a threat when he popped a 1:55.76 in June, two seconds better than his previous best. Americans Chase Kalisz and Abrahm DeVine will also be hunting for a potential medal with the world’s 4th and 5th best times of the year.

The women’s 200 back will be missing Olympic gold medalist Maya Dirado who has retired, and the 100 back could potentially be without Katinka Hosszu due to scheduling issues, but even if both swam those events they probably wouldn’t be the favorite.

Dirado upset Hosszu for the 200 back gold, but there’s a good chance she wouldn’t be the favorite this year anyway. Hosszu has been consistent with seven swims sub-2:07 in her career, while Dirado only has two. On top of that, the field is improving with American Kathleen Baker and Canadian Kylie Masse becoming international threats in the 200, and 2015 World Champ Emily Seebohm looks to be back on form after her disappointing showing in Rio.

If Hosszu opts to swim the 100 she won’t be favored. Masse has been faster than her Olympic winning 58.45 twice this year, and Baker is poised to dip below the mark as well after going 58.57 at U.S. Trials. Seebohm, who won the World title in this event as well, is of course a player too.

For a more in-depth look at the events, follow our event-by-event previews here.

The most wide open events imho are M200 breast and W100 back.
M200 fly not at all. The only question is if Kenderesi is sick or injured. At the moment it doesn’t seem like that, so he is the favourite, then the “usual” contest for the podium.
W200 back neither. Hosszu, Seebohm, Baker are the clear odds.

The men’s 200 breaststroke is the most wide open. Just watch the 200 final in Rio, where the winner was lane 8, silver was lane 3, and bronze was lane 7.

I doubt in the history of Olympic swimming that this ever happened before, such an odd result.

I could see the same time happening in Budapest. All eight men qualifying for the final within about a second. Basically just the difference of doing better turns or having a slightly better day at the office. Lane 8 potential winner again.

For 50 fly Martins was also under Manadou time with 22,70 from this year. Also govorov time is under Manadou.

Thanks, I missed Martins. Yes Govorov was under last year but was referring to this year.