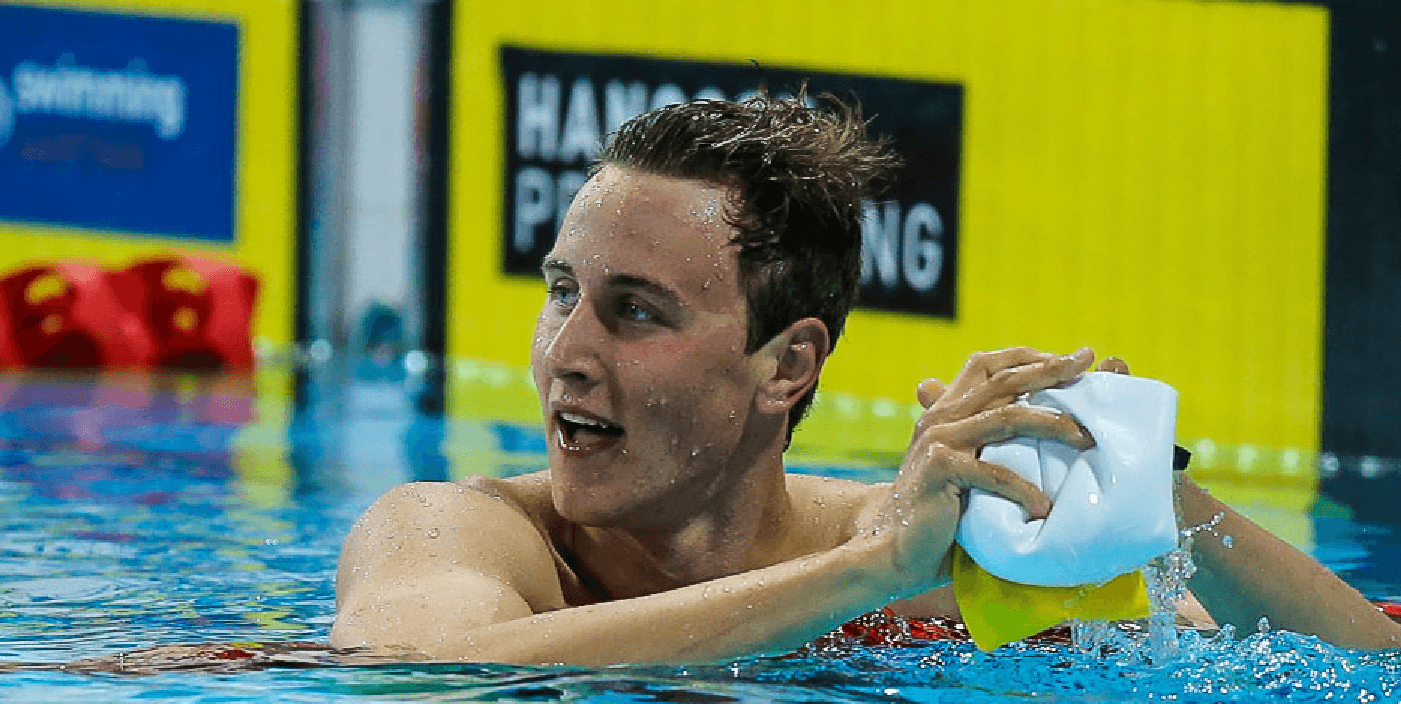 Even with the recent injury problems for James Magnussen, the Australian men’s sprint group is neither down nor out. 21-year old Cameron McEvoy on Monday swam a 47.04 in the 100 long course meter freestyle, which is the fastest time ever swum outside of the 2008-2009 super-suit era, the third-fastest time in history, and a new Australian and Commonwealth Record.

McEvoy’s swim is faster than the 2008 mark done by countryman Eamon Sullivan at the Beijing Olympic Games – the fastest time of those Olympics, though it was done in a semi-final and left him with only a silver medal in finals. The fastest time done by any swimmer of any nationality in a ‘textile’ suit allowable under current rules was the 47.10 done by the aforementioned Magnussen at the 2012 Australian National Championships. Magnussen was 20 when he did that swim and hasn’t been faster since.

“It felt no different to any other race,” McEvoy said. “If I had known I was that close [to the World Record], then there might have been something else in me that would have pushed me a bit further. But it’s a 0.52 PB off the PB I did in Perth. It’s unbelievable.

“It puts me into a good position come Rio, but in saying that there is a history of world number ones going in first and not coming out with the gold and the Olympics is notorious for not always producing the best time to win it.

“I’m very much aware of that and I’m very much aware that everyone else in the world will be sitting on their couch watching this race and firing them up getting ready for training at 5am just to beat me. So although it’s good, I can’t sit back and relax and think that that’s going to come without any more effort it Rio – I have a lot to do.”

That time by Magnussen was, in fact, done in this same Adelaide pool.

Neither of the three swimmers were ever pure sprinters, though Sullivan was moreso than the current two Dolphins – as is borne out in the splits that had Sullivan faster on the opening 50 than either McEvoy or Magnussen in their respective record-setting swims.

The current top 11 performances in the 100 freestyle of all-time:

McEvoy attends the University of Bond, where he trains under coach Richard Scarce and is currently studying physics.

Magnussen, meanwhile, finished just 4th in the race in 48.68, which should earn him a spot on the Australian 400 free relay, but not in the individual swim. That second individual spot will go to 17-year old Kyle Chalmers, who was 48.03.

Terrific swim by McEvoy. I am SO looking forward to seeing what Caeleb Dressel and Nathan Adrian have in store at the Olympic Trials in the 100 FR. I believe both men will be in the :47 but can either of them go sub :47. Caeleb certainly could. Not too sure if Nathan can. I am interested in everyone’s thoughts here!

Nope, no sub 47, not going to happen. Just because Mcevoy just went 47.04 does not mean the americans sprinters are suddenly able to do and surpass it.

Dressel might be able to do it probably 2 years from now. McEvoy has more international experience with the big guns.

I agree with that. As for US Trials, I will be happy if Dressel breaks 48. It should be enough to get him a individual spot.

Christopher Reid reppin’ the Tide!! 53.12 Roll Tide for the insane prelim swim. I’ve seen him push 51s at practice… No goggles or speedo

Eating your own head is actually physically impossible 🙂

ok i now this is off topic but did anyone notice that from the arena pro swim series dropped the qualifying times tin the 50 free to a 20.59 to a 19.89 SCY and the 100 free 44.59 to 43.39. I am kinda pissed because I made the cut and then they lower the qualifying time and I’m 16 and i kinda wanted to go lol. if anybody knows why let me know

I’ve got nothing but awe for this swim. Fastest swim “pound-for-pound” for sure, just 0.15 shy of Cielo’s record in a rubbersuit. And 1:45 in the 200. This guy is to swimming what Allen Iverson was to basketball: the Answer. Right now there is nobody like him.

I predicted 47.20.
47.04! Very close.
As usual at Australian olympic trials the sprinters make the show.
That’s an amazing performance in textile.
Now he swam that time I’m even a little bit disappointed he has not broken Cielo’s suited world record.
Hopefully for McEvoy he can deliver in the olympic final. Like Magnussen in 2012 he will arrive in Rio as the huge favorite and the pressure will be entirely on his shoulders.