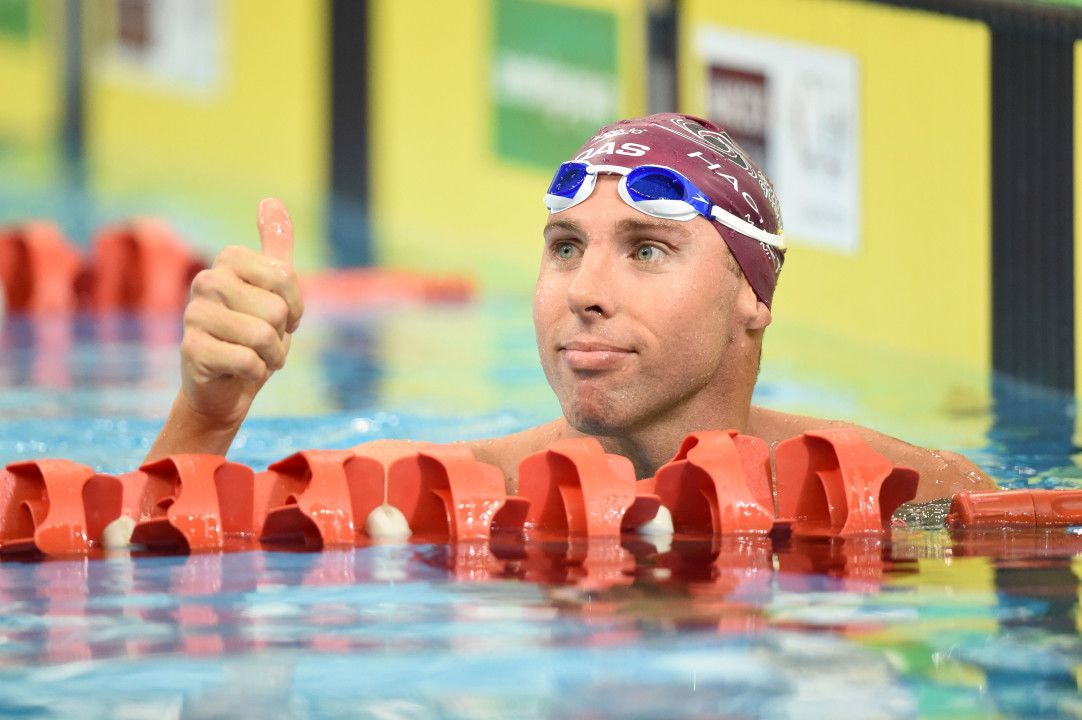 Several Australian media outlets are reporting that Grant Hackett was questioned by Australian Federal Police in Melbourne after an incident aboard... Current photo via Swimming Australia

Several Australian media outlets are reporting that Grant Hackett was questioned by Australian Federal Police in Melbourne after an incident aboard a flight.

“The AFP can confirm it was requested to attend an arrival gate at Melbourne airport earlier today,” a statement released on Sunday said.

“A 35-year-old man was spoken to however at this time no charges have been laid. Enquiries in relation to this matter are continuing.”

While the AFP and the airline, Virgin Australia, refused to name the 35-year old, but Ray Hadley of 2GB Radio shared details about Hackett and the passenger in front of him reclining his seat.

“Grant Hackett took exception to the reclining of the seat. There was some sort of altercation,” Hadley said.”There’s allegations from people onboard the flight that Hackett assaulted the man in front of him.”

Hackett is alleged to have ‘smelled of alcohol’ by other passengers on the flight.

At last week’s Australian Olympic Trials in Adelaide, Hackett finished 4th in the 400 free and 11th in the semi-finals of the 200 free, which means he missed his comeback bid to qualify for the 2016 Olympic Team. Hackett did qualify for last year’s World Championship team as part of the 800 free relay that won a bronze medal.

Hackett was earlier in the day named as an official mentor to the Olympic Swim Team by Australian head coach Jacco Verhaeren.

FACT – Grant has a well documented history of drug, alcohol and domestic violence. The man should be stood down from all involvement with the Australian Swimming team & the Channel 7 commentary team.

He is not a role model – he is an addict.

I would expect he has lost that mentor position over this no? It’s a pretty big deal at least as big as Phelps DUI.

It this was an isolated incident and he wasn’t such a prominent person in Australian swimming and media it wouldn’t be so bad, but he has a history of domestic violence and substance abuse, so it’s probably best to not excuse this behaviour. Hopefully the Australian media won’t forgive him this time, he shouldn’t be a mentor or commentator.

My trick for flying economy is to read a history /biography book in which everybody is suffering immense & unbearable loads. Then everything becomes -“oh I can handle this “. My last trip which included screaming toddlers & the champion recliner in front was an Austrian psychiatrist imprisoned in Auchwitz.

I’m looking for one that will last for 9 hours for an upcoming flight.

The book of -not the Austrian Psychiatrist himself .

I liked it better with the Austrian psychiatrist also being the champion recliner.

I believe it’s time for Mr. Hackett to grow the F up.

Not a badass. He may have pissed in the wrong pool this time. AFP is all business.
They won’t give a s— who he is.
Expect this sort of thing from NFL players maybe not swimmers.

He does not have a wife as far as I know. Not that I would know because I don’t ‘internet stalk” .

Who does Grant think he is? Russell Crowe?