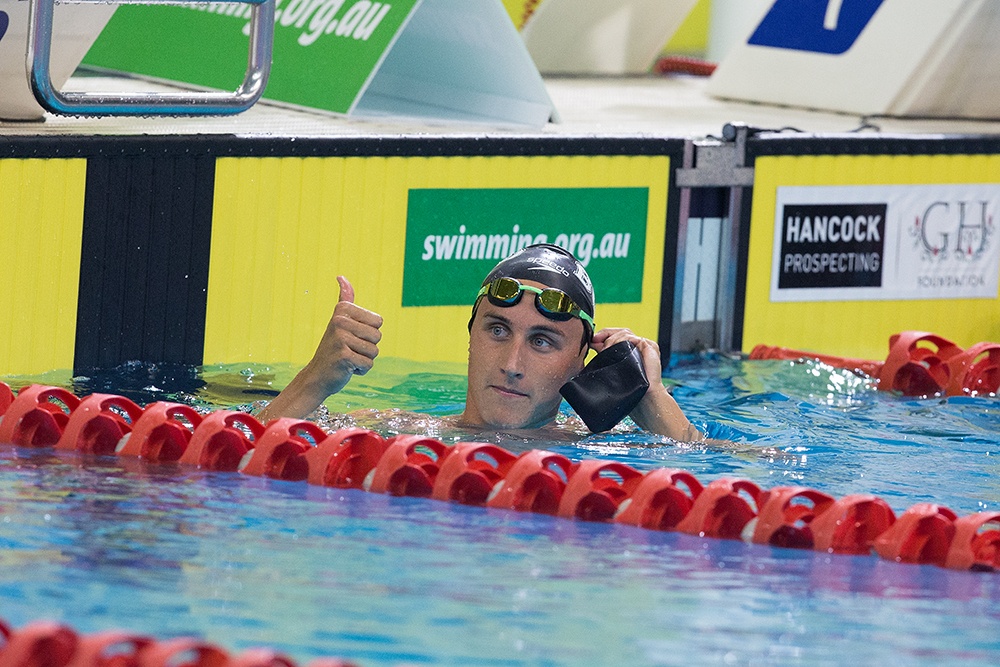 There will 34 athletes headed to Rio, which includes 19 women and 15 men, which is significantly smaller than the 2012 team that included 47 swimmers... Current photo via Swimming Australia

The 2016 Australian Olympic swim team has officially been announced. There will 34 athletes headed to Rio, which includes 19 women and 15 men, which is significantly smaller than the 2012 team that included 47 swimmers.

The oldest athlete on the team is 28 year old Alicia Coutts and the youngest two members on the team will be Kyle Chalmers and Tamsin Cook who are both 17.

The team may expand to 37 dependent on whether the men’s 4 x 100 freestyle is qualified to swim in Rio. James Roberts, James Magnussen and Matthew Abood will have to wait until FINA confirms that they will be awarded a quota spot.

The reason the Australian men have to go through this process is that they missed the top 12 ranking at the World Championships and now need to ensure they are ranked in the next four best nations for Rio. Once the quota place is confirmed Swimming Australia will nominate these swimmers to the AOC and their selection will be considered.

“The Team is shaping up perfectly,” said Jacco Verhaeren, Head Coach of the Australian National Team. “We’ve got a great group together, we’ve had some great races here at the National Championships.”

“I think that’s quite unique in a swim team, that you can have that. Georgia Bohl has never really raced internationally and her first big race is going to be at the Olympics so that’s very special. She doesn’t seem to be fazed at all so that’s good but no doubt she can pick up a lot from long time campaigners Alicia Coutts and Bronte Barratt,” Verhaeren said.

“It’s here at trials that you really show what your capabilities are and being able to convert that on the bigger stage, that’s the goal,” Verhaeren said.

There will be 13 swimmers who will compete in their second consecutive Olympics. A list that includes:

Cate Campbell who will be competing in her third Olympics knows that accomplishing her goals won’t be easy, “It’s going to be tough, there’s no denying but we get to swim a relay together which has always been our dream. It’s the one time we get to compete with each other instead of against each other and to be able to do that in Rio will be an absolute dream come true,” Campbell said.

“You’d think that third time round at an Olympics it would get easier, but it doesn’t, it gets harder and harder and more and more special each time. It means so much more to me each time I go because you know how much time and effort you’ve put into the past for years.”

Cameron McEvoy, who went to London as a relay swimmer, is excited about the opportunity to compete in multiple events in Rio, “I’m ecstatic. I’ve never had such a good week before in the pool. All three times that I’ve done I’m extremely happy with them personally. They all rank me high up in the world in terms of world rankings and I can’t fault that leading into Rio. It’s a nice position to be in for these three events,” McEvoy said.

“It’s going to be a very different experience. Every time you put on the green and gold it’s never going to diminish in importance to anyone. I’m also really excited to be able to do that in as many events as I can. I get 11 more races than what I did in London, that’s exciting, not that I’m counting!” said McEvoy.

Solid performance from Australia. The US is going to need some SCY swimmers to be equally outstanding in LCM to compete. This means you Jack Conger, Caleb Dressel, Keven Cordes, Cody Miller, Will Licon, Josh Prenot, Townley Haas, Ryan Murphy, etc…

This whole group are fine in LCM, at least 4 medals here.

Tranter’s and Wilson’s times were definitely enough to see them in the final and then who knows?
Why have no swimmers in these two events, really don’t agree with that.

agree, meeting the Olympic set QUAL time and being top in your nation should secure you a swim.

Thank you Aussie swimmers for an entertaining week of superb, fast swimming! With zero political drama and minimum online hysteria, I may add. Totally the opposite of what happened during my country’s (France) trials!

Best of luck in Rio!

Gotta feel for Matthew Wilson. Would have loved to see him given the chance to improve even further. You can add young Stockwell to that list as well (especially after his relay split of 48.0). Not sure being a relay swimmer is enough motivation for Magnussen to work hard to get back to his best, even with the lure of a gold medal?

I am sure Magnussen is acutely aware that if he gets back to sub 48, Australia will have a good shot at a relay medal. In fact, if that happens and pending US trials results, I will take Australia ahead of France in men 4×100 free despite very strong Bobo protestations, .

Yes, I agree. Sometimes the trajectory of a swimmer should be taken into consideration, especially when filling the extra relay berths.