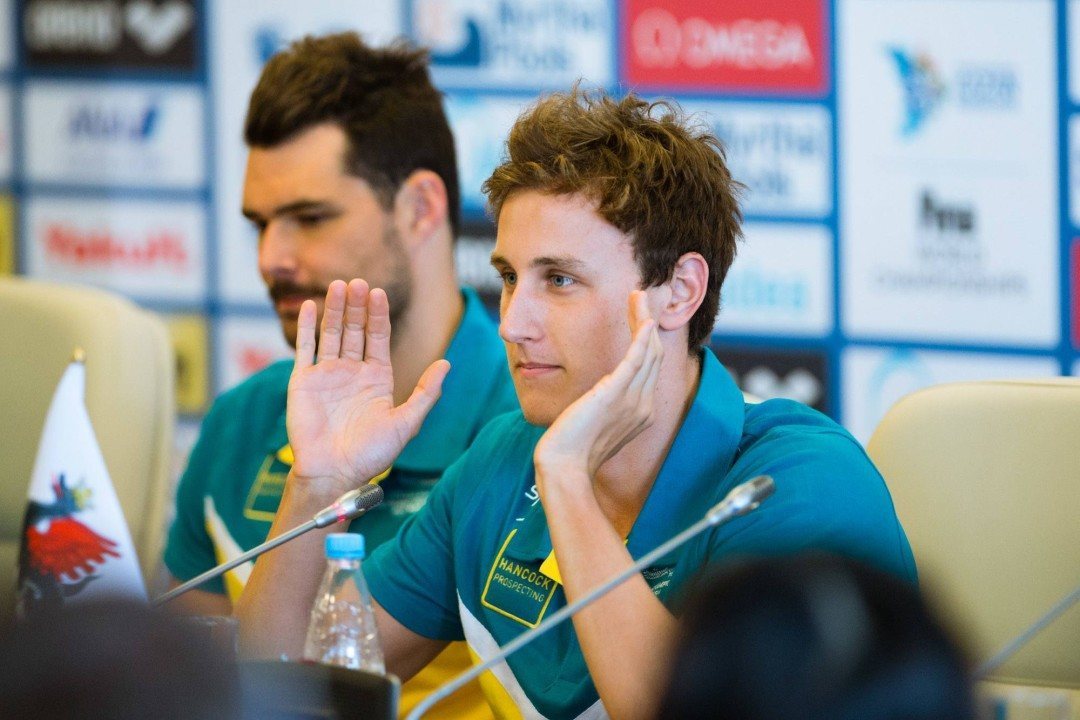 Cam McEvoy (above, right) anchored the Australians to a 400 free relay time that should lock-up their qualification to Rio. Archive photo via Tim Binning/TheSwimPictures.com

It still feels funny to say, but after a 13th-place finish at last year’s World Championships, the Australian men don’t hold an automatic qualification in the 400 free relay to the 2016 Summer Olympic Games in Rio de Janeiro.

The federation, hoping to both improve their seed and ensure a spot at the Olympics, swam a time trial to conclude the 2016 Australian Olympic Trials on Thursday, and while there’s still no guarantee of a spot, they all-but-ensured that four other teams wouldn’t beat them.

The team of James Roberts, Kyle Chalmers, James Magnussen, and Cameron McEvoy, who were the top 4 finishers in the individual 100 free earlier in the meet, combined to swim 3:12.26. That’s not-only a four second improvement over what they went at Worlds, but is faster than all but France and Russia’s times from those same World Championships.

That doesn’t mean the Australians are a lock to medal, as the Americans also slipped-up in prelims and missed the final in the 400 free relay, and a young team from Brazil (4th at Worlds) will look to ignite their home crowd. It does, however, give the Australians sureties of their qualification, and some confidence that they’re better than their subpar prelims performance from Kazan. That relay qualification is the only way that Roberts and Magnussen will earn spots on the Olympic Team – they weren’t among the 34 announced at the meet’s conclusion.

Of the four swimmers who raced in prelims last year, only 1, Chalmers, was on the time trial relay on Friday – and he was the fastest link of that failed performance by a full second in Russia.

As SwimSwam’s Loretta Race pointed out in her Olympic relay qualification update at the end of March, the top 12 teams from the World Championships qualify automatically for Rio, while the next 4 best times between March 1st, 2015 and May 31st, 2016 will earn invites as well to create a field of 16.

That was well. We want a field stuffed of highest quality.

When did Spain swim that time? Have they swim other relays this year?

Missed that completely – thanks
Surprised they didn’t swim a women’s 4x200m as well.