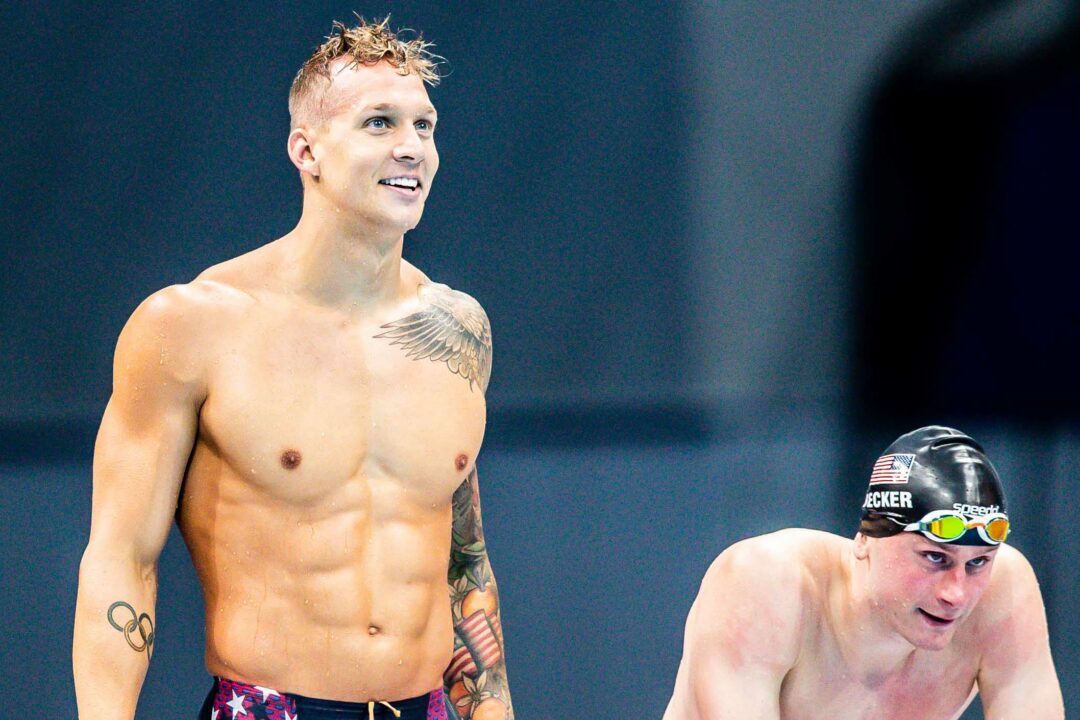 Day 4 will feature Caeleb Dressel's first individual event of the 2020 Tokyo Olympics, the 100 free where he is .05 off Cesar Cielo's World Record. Current photo via Jack Spitser/Spitser Photography

It is Tuesday evening in Tokyo and the 4th prelims session of the 2020 Olympics will kick off with Caeleb Dressel‘s first individual event of the meet: the 100 freestyle.

Dressel will have to answer to 2nd seed and defending Olympic Champion Kyle Chalmers of Australia, though, whose best time since Rio is a 47.08 also from 2019. Other contenders include Kliment Kolesnikov of the Russian Olympic Committee, who is fresh off his silver medal win in the 100 back earlier on Tuesday, and Italy’s Alessandro Miressi.

And keep an eye out for Romanian 16-year-old David Popovici who was the fastest man in the world in this event before Dressel’s relay lead-off split two days ago. Popovici crushed the World Junior Record with a 47.30 at the recent European Junior Championships.

If he makes it to the podium, Popovici would win Romania’s first Olympic medal since 2004.

In the women’s 200 fly, China’s Zhang Yufei leads the charge after winning silver in the 100 fly on day 2. Only Zhang and USA’s Hali Flickinger have broken 2:06.00 in this event this season.

USA’s Regan Smith, fresh off a bronze medal win in the 100 back earlier on Tuesday, is another contender in this event as is 2019 World Champion Boglarka Kapas of Hungary.

There are only 17 entries in the women’s 200 fly, meaning nearly everyone will make it to semifinals so there is very little pressure on the top seeds to swim fast in this race.

The 3rd event of the session will be the men’s 200 breast, led by top seed Anton Chupkov of the Russian Olympic Committee. Chupkov set the World Record in this event at 2:06.12 during the 2019 World Championships and won bronze in this event at the Rio Olympics.

Besides Chupkov, it is a relatively new field that leads this event. Defending Olympic champion Dmitriy Balandin of Kazakhstan will be racing but he hasn’t been at the top of the 200 breast field for a while now (his fastest time since Rio is a 2:08.16)  and 2016 Olympic silver medalist Josh Prenot did not make the U.S. Olympic team.

The Netherlands’ Arno Kamminga and Japan’s Shoma Sato are some of the top contenders in this race alongside Australia’s duo of Zac Stubblety-Cook and Matthew Wilson. Kamminga won silver in the 100 breast final on day 2 while Stubblety-Cook is the fastest in the world this season with a time of 2:06.28 from June.

After  Tom Dean and Duncan Scott won gold and bronze, respectively, in the 200 free final earlier on Tuesday, Great Britain is set up to be lethal in the men’s 4×200 free relay. The start lists for this event have not been made public yet, but Great Britain also has the likes of Matt Richards and James Guy on their side.

Day 4 marks the first time the men’s 800 free will be contested on an Olympic stage and top seed Gregorio Paltrinieri, the defending World Champion, and  Gabriele Detti of Italy leads the field.

Detti won bronze in the 1500 free at the 2016 Olympics and Paltrinieri is the only swimmer to have broken 7:40.00 in the event. France’s David Aubry, who won bronze at the 2019 World Championships, will also be a strong competition to make the final alongside Norway’s Henrik Christiansen, who won silver at that same meet.

Wonder if they’ll swim Dean on the lead off of the heats? It’s his only event and he must be absolutely buzzing, give him a crack at 1.43 with clean water

While that would be a great sight, I’d prefer he saves any mega splits for the final. As others have suggested, it’s probably better if they put him on anchor (if they use him) so that he can either coast it home or surge on the last 100 if needed to get GB through.

Yeah, completely up to him whether he feels up to it as he can coast the anchor and we’ll be fine.

Just think sometimes the confidence carries people through and be a shame for him to miss the chance if thinks he can (PVDH the stand out one when he won the 200 one night, then broke the world record in the 100 free semis the next night despite a reaction time that gave him a moment to appreciate the surroundings).