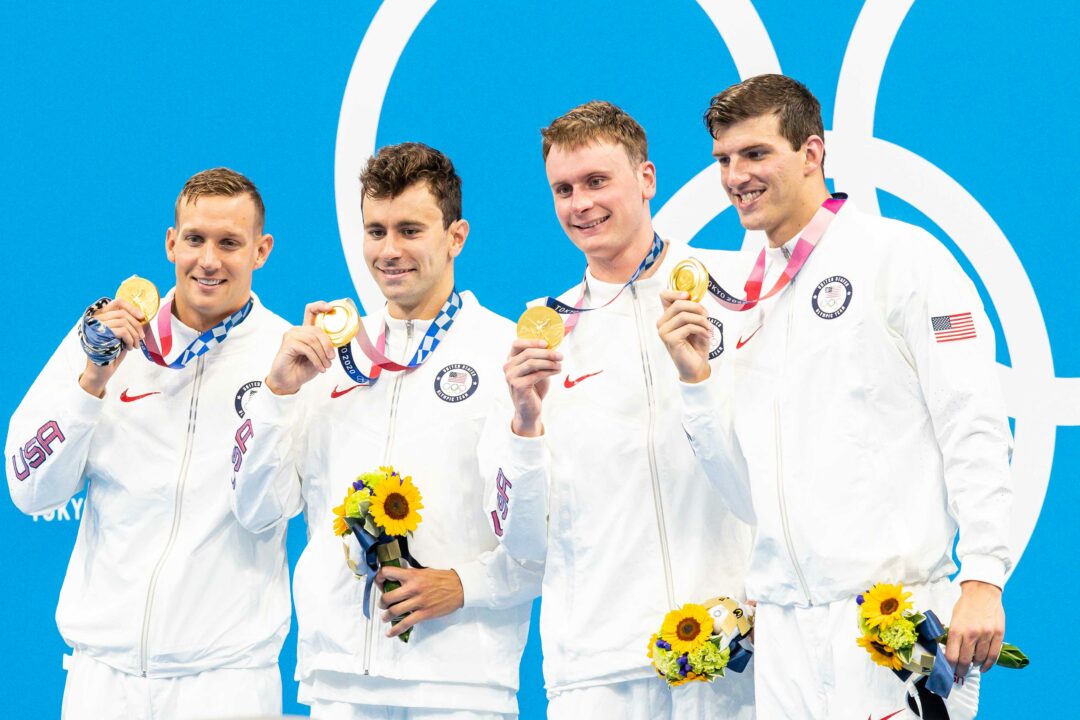 After considering retirement and waiting tables in 2020, Bowe Becker propelled the Americans to gold in the men's 400 free relay at the Olympic Games. Current photo via Jack Spitser/Spitser Photography

You’ve been reading about several star American swimmers during the past few months heading into the Olympics. Caeleb Dressel and Katie Ledecky, for example.

There’s one name you didn’t hear much about: Bowe Becker. An accomplished University of Minnesota college swimmer but not a superstar, he wasn’t expected to make the U.S. Olympic team. Far less likely was him being named to the final four team for the men’s 4 by 100 freestyle relay yesterday with a Gold Medal at stake.

It gets more interesting. During Covid the 23-year-old stopped swimming for several months and thought about retiring while waiting tables at a restaurant. “Swimming gets in your head a lot staring at the black line,” he said today during a media interview.

Fortunately for the U.S., about nine months ago he decided to start training again to try to make the Olympic team. And he did.

On Sunday he carried the US relay team in the preliminary race in the morning. His split was so fast he earned his spot for the finals race last night.

NBC Sports swimming analyst Rowdy Gaines called Bowe the “rookie” on the team because it was his first big-time Olympics race while the other three have been there before.

He was crucial on the third leg of the final relay, posting a personal best time of 47.44 seconds, opening up the lead for anchor Zach Apple to finish things off and give Americans the coveted Gold Medal.

“If you had told me I would have a Gold Medal from the Olympics today, I would have laughed at you,” he said.

This is a great story that makes the Olympics so compelling as theatre and for touching our deepest human emotions. Here’s a guy, really good by national standards but not at all regarded as a star among the nation’s most elite, swimming so fast at just the right time that he’s now an American hero.

Today many more Americans know who Bowe Becker is than did 48 hours ago. A beautiful phrase from the NCAA basketball tournament is reserved for the team that wins the entire 68-team tournament. It’s called “one shining moment.”

Bowe experienced one shining moment yesterday. He woke up on Sunday morning, swam the two greatest 100 meter freestyle legs of his life in just the right situations, and his life is changed forever. From now through the rest of his life, he’ll always be an Olympics champion, an American hero.

This guy inspired an entire nation Sunday. Under pressure with no experience in a race of such massive importance, Bowe Becker blazed through his 100 meters and bolted ahead to solidify first place.

There will be plenty of other US swimming stories over the next week. But no matter what else happens, those who saw Bowe Sunday will always remember what he did, out of relative obscurity, rising high with the brightest lights shining.

Love to know the reason behind swimming Pieroni vs. Becker in the Prelims of the Medley?! Becker certainly has a great heart and would have been so much more fun (not to mention better) to watch than Pieroni! Politics in the Olympics?

His flip turn was the difference in that whole relay. Smoked the lanes next to him and got cleaner water for Apple. Big time swim.

This is the first Charles Hartley article I’ve actually read through and enjoyed. Nice one!

Apparently, according to SS podcast ep with Ron Aitken, getting a call from ISL was the reason he got back into training

I think it is also worth mentioning that he has chronic arthritis (not sure what kind I’m no expert on this). There were times in his college career where he’d miss meets or practices because of a the pain from a flair up.

This guy doesn’t quit, and I’d imagine it’s adversity like that that helps him show up big when it matters, time and again. Inspirational story, and I’m glad Bowe is finally getting some recognition, it’s well deserved.

Is it Bowe or Bowen? His roster on Minnesota’s website says Bowen, but this site often says Bowe, and I’ve seen both in various places.

I’m guessing Bowen is his full name, and he goes by Bowe

As a UMN alumni, I can confirm this. Bowen is his full name. Bowe is his “nickname.”

Probably has another shot at a medal in the 4×100 medley relay. I imagine they’d use him as the free leg in prelims.

Dressel Fly, Apple Free in the final. Leaves possibility for Bowe in the prelims

He has earned it