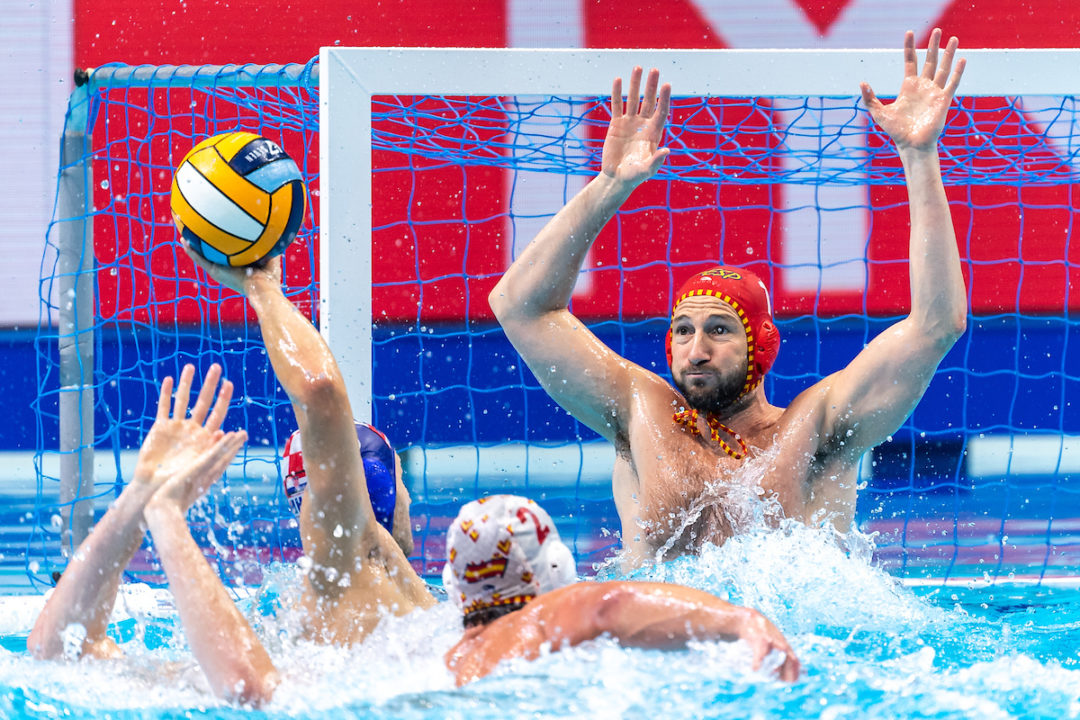 The American men recorded a blowout victory to match their female counterparts in moving to 2-0 in group play. Spain did likewise, moving to 2-0 in Group B. The US is in Group A with Japan, Greece, Hungary, Italy, and South Africa. Group B is composed of Australia, Montenegro, Serbia, Spain, Croatia, and Kazakhstan.

Group A: USA Moves to 2-0 to take Sole control of Group

The US squad put together a dominating performance in their 2nd game of group play, moving to 2-0. The Americans down South Africa by a 20-3 decision, led by an incredible 2nd quarter effort, in which they scored 9 goals. The US managed 20 goals on 36 shots (56%), while South Africa posted 3 goals on 27 shots (11%).

If we’re giving out an MVP award for the game, it should go to US goalkeeper Alex Wolf, who saved 13 of 16 shots on goal (81%). The Americans also employed a swarming defense, preventing South Africa from getting off clean shots in many cases. Ben Stevenson also put together an efficient game, playing just shy of 18 minutes, and scoring 3 goals on 3 shots.

Hungary also downed Japan considerably in Group A play, besting the host country in a 16-11 decision. The match was tied 8-8 at halftime, but Hungary won the 2nd half 8-3 to pick up the win and move to 1-1 in the group.

Shooting efficiency and goalkeeping played a major role in the outcome of the match. Japan out-shot Hungary by 2 shots, totaling 35, while Hungary totaled 33. The difference was Hungary made 16 of their 33 shots for 48% shooting, while Japan made 11 of 35 for for 31% shooting. Hungarian keeper Soma Vogel was very effective in saving action shots, only allowing 5 of 15 in. He also managed to save 1 of 4 extra player shots, which is a significant momentum-stopper to the opposing team.

In the 3rd Group A game, Italy and Greece tied 6-6 in a defensive grudge match, moving both teams to 1-0-1 in group play. The teams combined for 61 shots, only 12 of which went in, which is just 19.6% shooting on the match. Italian keeper Marco del Lungo saved 65% of shots that came his way, while Greek keeper Emmanouil Zerdevas saved 71%.

Group B: Spain moves to 2-0 thanks to lower-scoring match with Montenegro

Like the US in Group A, Spain has taken sole control over Group B, moving to 2-0 after an 8-6 win over Montenegro. This was another defensive battle, full of contested shots and excellent goalkeeping. There were only 8 total points in the 1st half, and 6 total points in the 2nd half.

The defense was swarming on both teams, with only a combined 52 shots getting off through the entire match, an average of 13 shots per quarter. Spain’s Blai Mallarach Guell was pivotal for his team, scoring 2 extra player goals. Those extra player goals are critical, because it allows the team that has the extra player to capitalize on the compromised defense of the other team.

Kazakhstan also got into serious foul trouble, allowing Serbia to score 9 of 9 extra player goals, as well as 1 of 1 6-meter shots. In short, that means that 10 of Kazakhstan’s 19 points ultimately came about due to Kazakhstan penalties.

In regular play, Croatia was struggling offensively only scoring 2 goal on 14 shots. They picked up 4 of their goals on extra player shots, and the other 2 goals on penalty shots. Australia, on the other hand, put up a much more balanced offense, scoring 5 goals in regular play, 5 extra player goals, and another goal off a 6m shot.