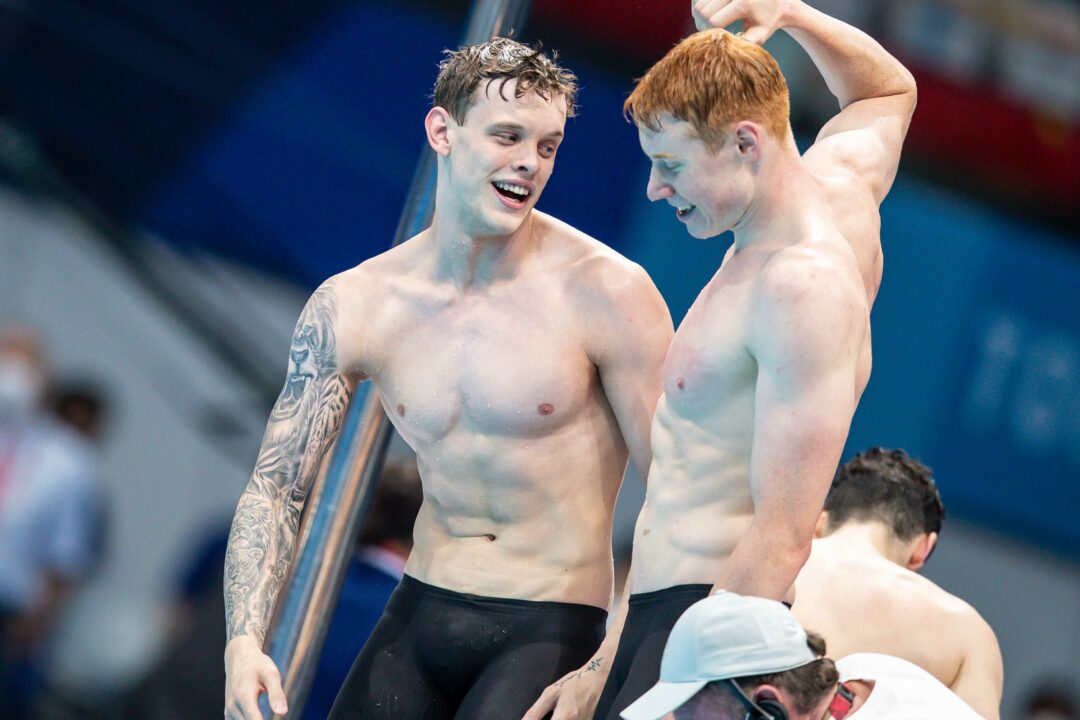 Great Britain’s Tom Dean, James Guy, Matthew Richards, and Duncan Scott came within .03 of the 4×200 freestyle relay World Record to win gold on day 4 with a time of 6:58.58. The World Record was set back in 2009 by USA’s  Michael Phelps, Ricky Berens, David Walters and Ryan Lochte.

This was Great Britain’s first-ever gold medal in this event and they broke the European Record, set by Russia at 6:59.15 at the 2009 World Championships by more than half a second.

You can read a full breakdown of the race here.

Hungary displayed their dominance and strength on both sides of the 200 fly with Kristof Milak winning gold and breaking Michael Phelps‘ Olympic Record from 2008.

Milak’s suit ripped while he was in the ready room and he had to change just about 10 minutes before the 200 fly final, he told reporters in his post-race interview.

He said that threw him off and that’s when he knew he would not break the World Record, but he ended up crushing the Olympic Record by about .8 anyway. His time of 1:51.25 was about half a second off his World Record from 2019.

On the women’s side, Boglarka Kapas of Hungary came within .09 her lifetime best 200 fly time from the recent European Championships to get 3rd in the semifinals.

In the women’s 1500 free final, Sarah Kohler made history by winning Germany’s first Olympic medal in pool swimming since the 2008 Olympic Games.

Her bronze-medal winning time of 15:41.91 makes her the 7th all-time fastest performer and breaks her own National Record from the 2019 World Championships by more than 6 seconds.

Continental and National Records on Day 4

Was Jacob Whittle’s 48.11 an English record?

Imagine GB trials for worlds in 2023. Should be cut throat. Dean, Scott, Richards, Guy, Whittle and only 2 individual spots. I wonder if Guy will swim to Paris in 2024. As long as he is hitting those relay splits why not?

I have to say that Dean winning surprised me. I thought Scott had him covered as he did at trials. I guess he just got out a touch too far going with Hwang.

Yeah, I think Hwang swung the final. I feel for Scott because I think if he and Dean raced head to head 10 times, he would win nine of them. Agreed that the fist leg was disappointing from Dean – cost GB the world record.

Andy Jameson on BBC said Tom Dean should buy Hwang a drink for towing him. Not sure Hwang is legally old enough for a few beers but you get his point.

I anticipate the improvement from Matt Richards at the next world championships.

The lead off leg for the team GB was disappointing