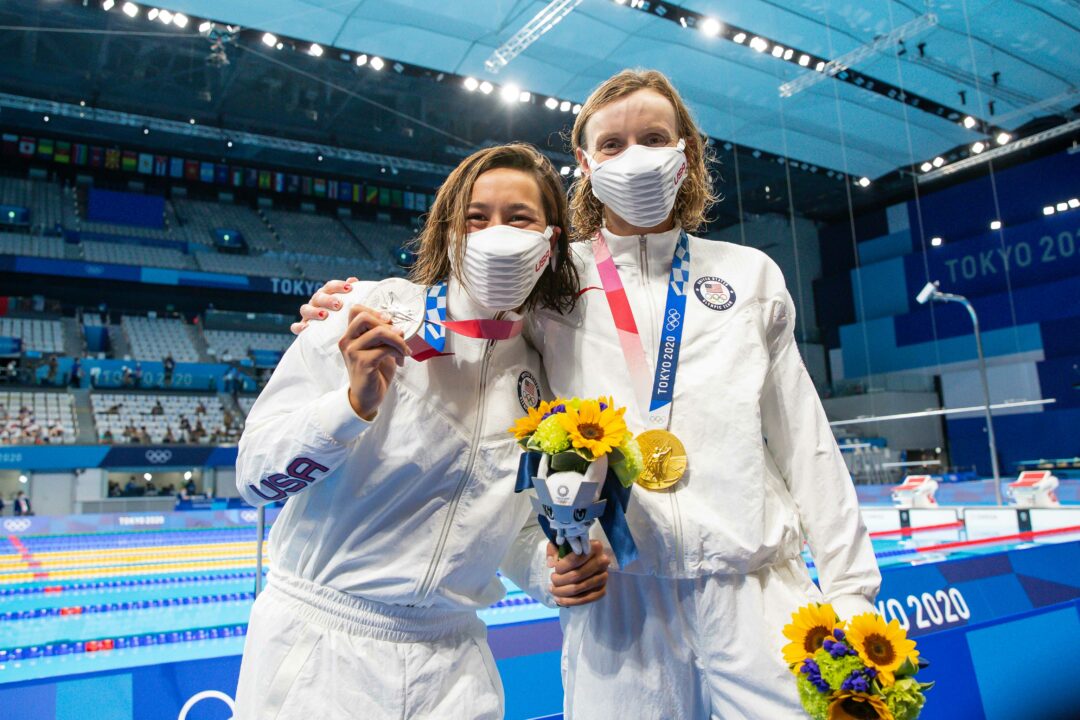 Ariarne Titmus won the first gold medal of the day for Australia in the 200 free, going 1:53.50 to overtake Hong Kong’s Siobhan Haughey over the final 20 meters. Haughey picked up a silver, Hong Kong’s first swimming medal, and took down the Asian record with her 1:53.92. Penny Oleksiak added a bronze (1:54.70) to Canada’s medal haul.

World Record-holder Kristof Milak put Hungary on the table for the first time in the Tokyo Olympics, breaking the Olympic Record in the 200 fly to win gold in 1:51.24. Japan’s Tomoru Honda (1:53.73) earned the silver medal ahead of Italy’s Federico Burdisso (1:54.45) who scored a bronze medal.

Japan picked up another medal -this time, gold- in the women’s 200 IM where Yui Ohashi touched out USA’s Alex Walsh and Kate Douglass in a thrilling finish. It was Ohashi’s second IM gold of the Games, and the second time the silver and bronze medal winners were Americans.

Australia and Great Britain each have two more gold medals after four days of swimming than they had in 2016, while USA and Hungary have 3 and 2 fewer, respectively. The Americans have had some notable misses this year, especially in the men’s 100 backstroke and the men’s 4×200 free relay. In the case of the latter, 2020 marks the only time the USA has failed to make the podium (with the exception of 1980 when the U.S. boycotted the Games).

Off topic: Respect to the GOAT (Phelps) for congratulating Milak with his gold in an Insta Story 🙂

Where is the article for Titmus’ win in 200 free?

And yet no article. There’s even article for bronze medalist in w1500

Lol chill. SwimSwam is pretty great at highlighting Australian achievements and Arnie got a lot of focus after the 400. I wouldn’t be worried about one article. If she ends up with 4 medals she’ll definitely get some more highlighting

Arnie will never be ledecky. Cope

I know people shut this down if it’s ever DARE suggested, but the Aussie team legitimately has a (very outside) chance to get the most golds.

If Australia can win M200 Breast (strong gold chance), W200 Free (very strong gold chance) and M100 Free (good chance but likely USA) tomorrow, then we potentially will be ahead by 3 golds (depending on the M800 and W200Fly, but Italy and China appear to be the favourites). If our solid chances (W200 back, W50/100Free) and some of our outside chances (all 3 medley relays) all fire then it’s possible.

If Australia nails most of their borderline gold chances we will probably beat the US in golds.

But they are borderline for a reason. We probably win a couple but lose most.

A Top 5 All-Time Performance guarantees a minimum grade of A regardless of placement.… Read more »

Cmon Aussies! Another medal and we equal our Rio medal tally .. we can do it

should even surpass it tomorrow. w4x200 gold is a lock and zac is looking great in the 200 breast

Agree. Surpassing Rio is a given. Matching/beating Sydney (18) in play but far from a done deal. Surpassing Beijing (20) would need everything to go right.

W100FR is before the MMR in the schedule.

What about Larkin ?
He was so consistent in 100 back.
May sneak for a medal in 200im

Could happen but think he’d need to be on career best form. His 100back was good but a long way from his best. Think he made a wrong call passing up 200back to chase a mirage in this one. DON’T trust him, however, in any relay.

4×200,
we have the Olympic champion in the event, who’s time is 1.2 & 1.7 seconds ahead of her nearest rivals in the 4 X 200
You have another who is consistently in the 1.54s as you 2nd swimmer, only 1 other girl is a 1.54 swimmer.,
There is another who made the Olympic final, our 3rd swimmer, where no others even had 2 swimmers in the final
Last swimmer, they must have confidence on, as they have 2 young guns, who had great swims in the 4 x 100, they could’ve used.

The rest you are seeing from a very conservative view.

The USA Men’s Swimming Team needs to pick up the slack.

And we only took 35 swimmers. Not 50 something