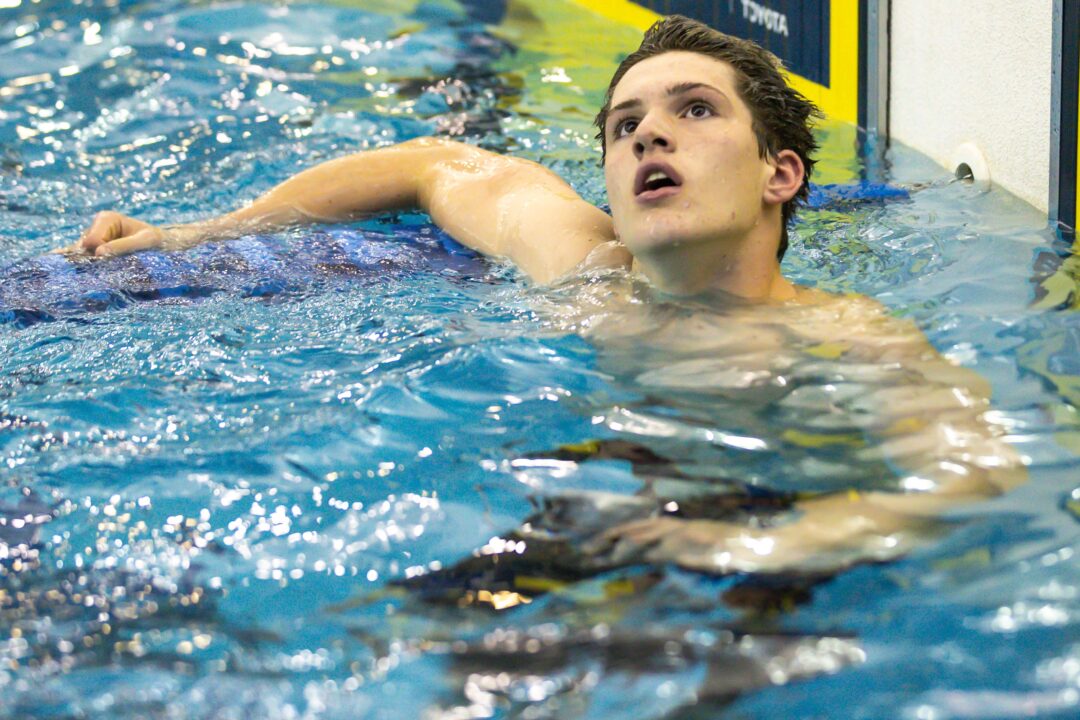 14-year old Thomas Heilman broke his 11th National Age Group record in 10 days tonight with his second record of the day in the 100 fly. Current photo via Jack Spitser/Spitser Photography

Heilman came into the meet with a personal best of 47.35, but the writing was on the wall last night when he split 45.8 on Cavalier Aquatics’ 400 medley relay. Sure enough, this morning he set a new personal best, and a new 13-14 National Age Group Record, with a time of 46.42. That time broke the previous NAG of 46.95 held by Michael Andrew.

Tonight, Heilman lopped another six-tenths of a second off the NAG, winning the event against a final heat consisting entirely of 17 and 18 year-olds.

Heilman took his finals swim out in the exact time as this morning, 21.59. That put him only 4th at the halfway point, but he came roaring home in 24.22, over half a second faster than anyone else in the race, to win in 45.81

To provide some more context — that time is less than two-tenths of a second shy of Luca Urlando‘s 15-16 NAG record of 45.62. He’s also less than a second away from Tom Shield’s 17-18 NAG record of 44.91. Heilman’s 45.81 also would’ve qualified for NCAAs last season — or any of the previous three seasons — something almost unheard of for a 14 year-old boy.

Heilman is scheduled to swim the 200 free shortly — another event in which he broke a NAG this morning.

1
-3
Reply
thomas the crank
Reply to  Distance Per Stroke

I thought one of the articles said that he had dad three teams but the same coach, he just followed the coach to the different teams. Maybe I’m thinking of someone else though.

The fact he went 1:34.6 in the 200 about 20 minutes later makes all of this even more impressive. It just doesn’t make sense he obliterated 2 nag records in one day.

May God have mercy on the next swimmers that Heilman faces in the near future!

Congrats to this kid. Can’t wait to see where he goes.

Heilman is literally going to be 45.8 (at the slowest) coming out of MIDDLE school. I know D1 flyers who weren’t under a minute coming out of middle school

He is a freshman in high school currently, but still, 45.8 would’ve been the Public High School Record only a few years ago.