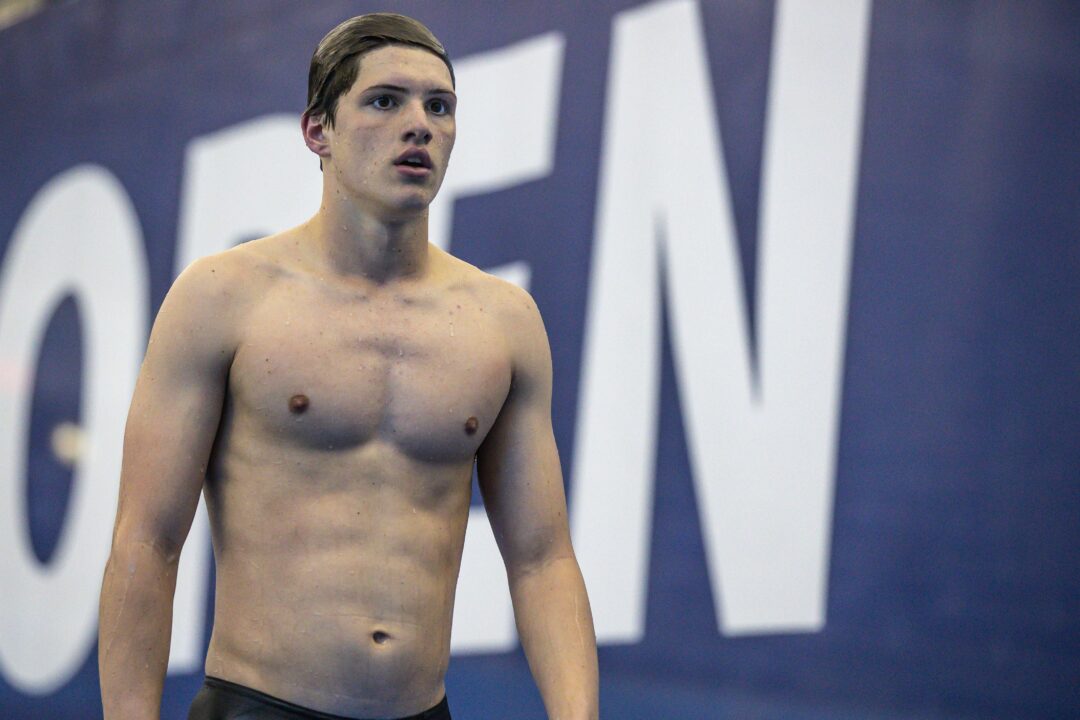 After breaking the long course 100 fly record last weekend at the US Open, Thomas Heilman took out the 13-14 100 yard fly record on Friday morning., Archive photo via Jack Spitser/Spitser Photography

Heilman swam 46.42 in the 100 yard fly, which knocked half-a-second off the old record of 46.95 that was set by one of the sport’s legendary age group swimmers, Michael Andrew.

Much like last week, when Heilman broke Andrew’s 100 fly record in long course, the Cavalier Aquatics product showed improvement in both the front-end and the back-end of his race to get the new record. He took his swim out about as fast as Andrew did in 2014, but closed half-a-second faster to make the gap on the record. Interestingly, Andrew’s long course record was a way different pacing pattern, showing a lot more back-half ‘patience’ in the race than his short course swim did.

At the time, Andrew’s swim was also faster than the 15-16 record. The swim was done on his 15th birthday, but because swimmers’ ages are recorded on the first day of the meet, he was still chasing 13-14 records at the time.

On Thursday evening, Heilman swam 19.83 to win the 50 yard free, which improves his personal best and ranks him #2 all-time in the 13-14 age group. He still has the 200 free left to swim on Friday morning – an event where he crushed the National Age Group Record in long course last weekend.

Question: Why do you individuals that are locked in on MA hate make every article even tangentially related to him a debate about him?

Andrew is a successful open swimmer at a world class level, a quick search will show he is #3 all time 100 Brst, #6 all time 200 IM, #16 all time 100 FL, #23 all time 50 FS. Any swimmer (including ones setting insane NAG records at 14) would be doing very well to have a career as good as Michael Andrew has had to this point.

Obviously that’s a tough progression and would be a massive accomplishment, but so is swimming that fast at any point.

The Andrew record was essentially noteworthy since it was a 13-14 NAG that was faster than the 15-16 NAG at that time. Crazy how much it was crushed today

This dude can almost qualify for ncaas 🤯

23
0
Reply
The condors were robbed

Andrew records were a fluke

3
-42
Reply
PVSFree
Reply to  The condors were robbed

35
0
Reply
Taa
Reply to  The condors were robbed

Yeah he hasn’t done anything since he was 14

TIL the olympics are nothing

19
-1
Reply
Eagleswim
Reply to  The condors were robbed

That’s a lot of flukes…

Michael Andrew is top 3 all time in an individual event. He is a successful, world class open swimmer whether you like it or not. His status as that is undeniable at this point.