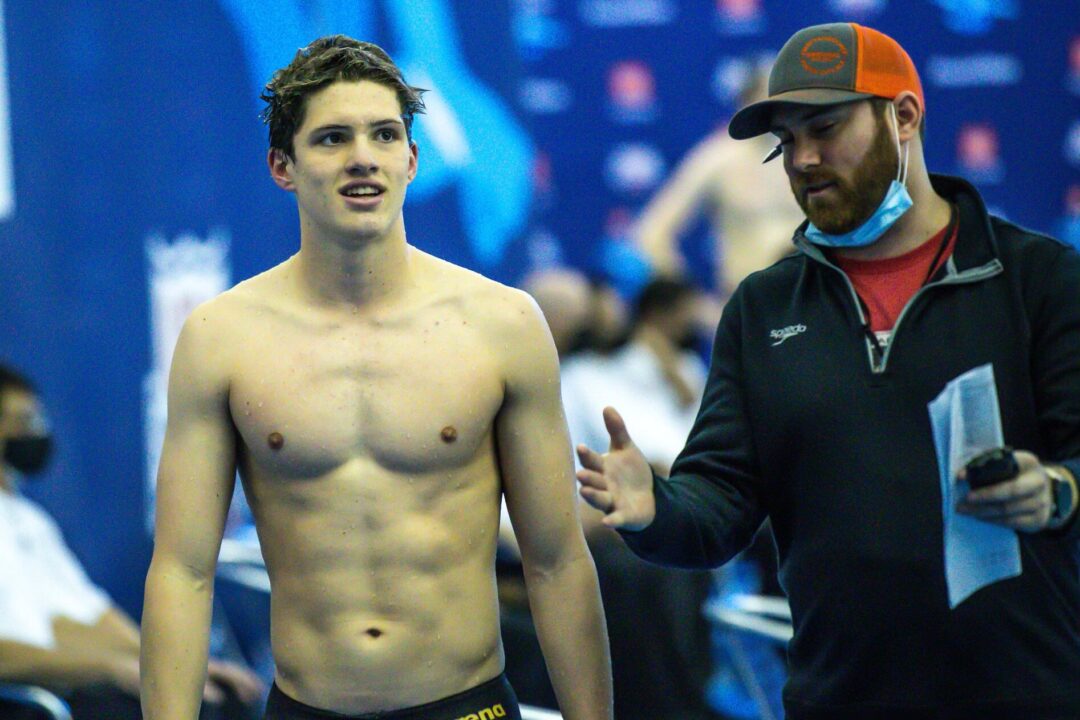 Heilman was faster on all 4 50s tonight than he was this morning, with the biggest improvement coming on 50 #3 (0.55 seconds). Stock photo via Jack Spitser/Spitser Photography

He did it. Thomas Heilman managed to lower the boys 13-14 200 fly NAG he set this morning at tonight’s final. After swimming the fastest time of the morning, Heilman looked like he was in trouble over the first half of the race. Mason Manta Rays Carl Bloebaum was out much faster, and it appeared Heilman wouldn’t win, or even be as fast as he was in the morning.

Well… that was not the case. As Heilman has shown an ability to do over the past two weeks, the 14-year-old Cavalier Aquatics product dug deep, and found another, faster closing gear. He did something rare for the 200 fly: he maintained a consistent pace over the final 150 of the race. Heilman split 22.98 on the first 50, then clocked splits of 26.59, 26.52, and 26.68 on the final 3 50s. He was able to overtake Bloebaum, and pull away from RAYS’ Gibson Holmes on the back half, tearing to a 1:42.77.

The swim was a huge personal best for the up-and-coming superstar, shedding another 1.20 seconds from his prelims performance of 1:43.97. His time in prelims was a personal best by 2.16 seconds, blowing away his entry time of 1:46.13. He also blew away the 13-14 boys NAG, which was held by Michael Andrew at 1:45.39. In total, Heilman took a jaw-dropping 2.62 seconds off the NAG today.

The swim tonight marked Thomas Heilman‘s 14th NAG in the past 11 days. It would be extremely difficult to prove it, but that has to be a record for most NAG records in a 2-week timespan, and, really, it was only a week and a half.

Heilman very nearly broke another NAG leading off the Cavaliers Aquatics 400 free relay to close out the meet tonight, but he touched just 0.3 off the mark he set one week ago.

Mind boggling to think this kid will graduate college in 2029…

Hopefully a well deserved couple of weekends off after this. 🙏

Dude is on an endless taper all the way to Paris

is there one more day left or is the meet done

Holding 26 mids for the last 150….kid lowered Andrew record by 2.6 seconds and likely still had some in the tank

When’s the last time a male swimmer jumped an age group record in the bracket above him? Heilman will almost certainly break the 17-18 Nag for the 2 fly as a 15-16 YO