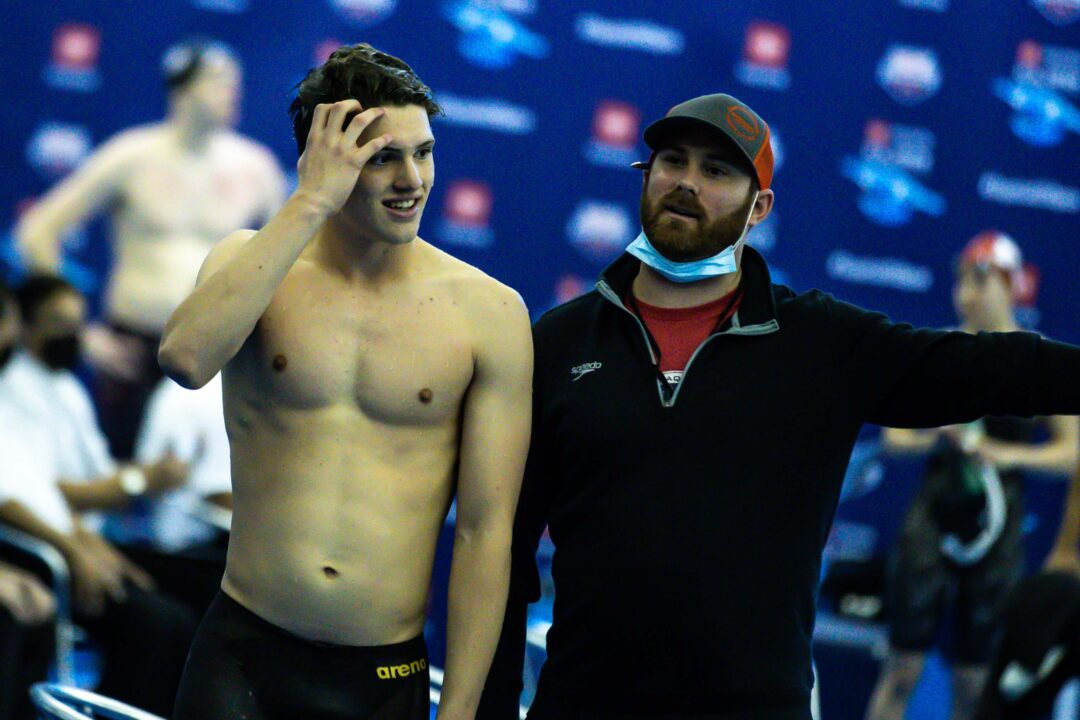 After crushing the boys 13-14 NAG in the 200 fly this morning, Thomas Heilman is on the hunt for his 14th NAG in the past 11 days.  Stock photo via Jack Spitser/Spitser Photography

Heilman broke his 13th NAG today in the prelims of the Winter Junior Championships (East). He’ll have the opportunity to lower the time even more in finals.

Kaii Winkler jumped up to the fifth-fastest 100 freestyler ever among 15-year-olds after his time at Winter Juniors prelims.

Daniel Diehl, left, is now the second-fastest 15-16 200 freestyler of all time after his performance Friday during Winter Junior Championships.

After a huge prelims performance, Dynamo Swim Club earned 4 spots in the girls 200 back A final. Dynamo will be represented in lanes 4, 5, 6, and 8. Rye Ulett leads the way, both as the top swimmer from this morning, and the swimmer with the fastest personal best in the field. Ulett’s best of 1:51.84 isn’t too far off the meet record.

SwimMAC’s Baylor Nelson will be going up against teammate Caleb Maldari and MCC’s Sam Powe in the boys 200 back. Nelson has been swimming well all week, but this race is still anyone’s to win tonight.

After crushing the boys 13-14 NAG in the 200 fly this morning, Cavalier Aquatics’ Thomas Heilman is on the hunt for his 14th NAG record in the past 11 days. Not only did Heilman break the record, he led the field this morning by a substantial margin. However, SwimAtlanta’s Sebastien Sergile should present a challenge to Heilman tonight.

We should also be in for a fun race in the girls 200 fly, where the on-fire Alex Shackell (Carmel Swim Club) and fastest seed Hannah Bellard (Club Wolverine) will go at it.

This was as good a battle as you could hope for in a mile. Sarasota Sharks’ Michaela Mattes and Jersey Wahoos’ Maddie Waggoner virtually swam stroke-for-stroke the entire way through the 16-minute race. Waggoner and Mattes quickly established themselves as leaders in the fastest heat, and by the 500 mark, it was clear this race was between them. Though Waggoner officially led for the vast majority of the race, it appeared the lead had changed countless times.

At around the 1000 mark, it looked like Waggoner was about to pull away, but Mattes responded, and held steady, staying with Waggoner. She then pulled back even with Waggoner, and the pair were splitting within 0.10 seconds off each other on the final handful of 50s.

Mattes made her move with about 100 yards left, and started pulling away slightly. Then the final 50 came, and the 16-year-old found another, final gear. She managed to out-split Waggoner by 1.88 seconds on the final 50.

Sarasota Sharks’ Liam Custer had no problem winning this race, although the time wasn’t his greatest. Custer swam a 15:07.41, touching 30 seconds off his lifetime best, which also stands as the 15-16 boys NAG. The now-a7-year-old hasn’t been quite at his best this week, however, his swim was still good to get the win tonight by almost 10 seconds. Custer will be racing in the 200 fly later in the session.

Luke Corey, on the other hand, had a great performance to clock the 2nd-fastest time in the field. Corey’s 15:16.98 marks a drop of 16 seconds from his previous best. 3rd-place finisher Isaac Lee also clocked a personal best.

Carmel Swim Club’s Berit Berglund, the 100 backstroke champion from last night, was out like a cannon in tonight’s A final. She established a huge lead on the first 50, then grew that lead on the 2nd, flipping at the 100 mark in 54.09. Berglund began to fade, and FAST’s Jo Jo Ramey and Dynamo’s Rye Ulett made up ground on the 3rd 50. Ramey and Ulett caught Berglund with a 25 to go, and Dynamo’s Sophie Brison used a stellar final 50 to pass Berglund as well.

Brison also posted a big personal best with her 3rd-place finish, coming in well under her previous mark of 1:55.67. Berglund ended up in 4th with a 1:53.52, also a best time.

Baylor Nelson did it again! The SwimMAC Carolina product got it done on the final 50, denying Firestone Akron’s Jonny Marshall what would have been an outside smoke upset. The swim was a huge personal best for Nelson, coming in well under his previous best of 1:43.25.

As previously stated, 17-year-old Jonny Marshall very nearly took this heat for himself, outside competing in lane 8. Marshall was still leading with 25 yards to go, but Nelson was able to edge him by several tenths of a second on the final 50. Still, the swim for Marshall was massive, crushing his previous best of 1:44.51, which he just swam this morning.

Anna Moesch continues to roll in Greensboro, demolishing the personal best she set this morning to grab the top seed for tonight. Moesch took control of the race almost immediately, leading at the 50, and maintaining that lead through the finish. With the swim tonight, Moesch has now rocketed up the all-time rankings, landing at #6 all-time in the 15-16 age group.

Katherine Helms, finishing 3rd, swam a personal best as well, dipping under 49 seconds for the first time in her career. The 17-year-old dropped nearly half a second from her previous best of 49.30.

Daniel Diehl is continuing to have a great week of racing. The 200 free champion from Friday got the job done tonight, taking over on the back half to clock a new personal best. He chipped another 2-tenths of a second off his best of 43.59, which he swam in prelims.

With the swim, Diehl is now #7 all-time in the 15-16 age group. Bolles School Shark’s Andres Dupont Cabrera swam a personal best of 43.68 to take 2nd, and after swimming a massive best time this morning, Eagle Aquatics 15-year-old Kaii Winkler was slightly slower tonight, but grabbed 3rd.

Baylor Nelson can’t be stopped this week. Coming off his down-to-the-wire victory in the 200 back (with a personal best to boot), Nelson clocked a new personal best of 1:54.83 to claim the double victory tonight. Nelson’s teammate Matthew Lucky got out to the early lead, but it didn’t take long for Nelson to take over. The MAC duo held strong through the rest of the race, and Lucky was able to hold off Bolles School Sharks’ Will Heck.

Nelson is now ranked #20 all-time in the event for 17-18 boys, while Lucky is also up there, now tied for #48 with Charlie Scheinfeld.

Alex Shackell is having a meet she’ll remember fondly for a very long time. The Carmel Swim Club 15-year-old is on an absolute tear, having been a member of the NAG-breaking 400 medley relay, the girls 100 fly champion last night, and now, the champion in the 200 fly.

Bella Answeeney swam a personal best to grab 3rd tonight, dipping under 1:58 for the first time in her career.

Speaking of swimmers who are on a tear this week, how about Thomas Heilman, who has actually been on a tear since last week? The 14-year-old rising star is on a historic campaign, having just broke his 14th NAG in the past 11 days. Destroyed is the better word for it, really. He just dropped another 1.2 seconds from his NAG performance this morning, which was almost 1.5 seconds under Michael Andrew’s NAG of 1:45.39. With tonight’s performance, Heilman took 2.62 seconds total off Michael Andrew’s NAG.

Mason Manta Rays went 2-3 in this race, with Carl Bloebaum posting a massive personal best to take 2nd. Bloebaum was out to a big early lead, and although Heilman and teammate Gibson Holmes would catch him, Bloebaum held on. His 1:42.94 was 3.05 seconds faster than his prelims swim, which was a personal best. In total, Bloebaum dropped 3.41 seconds today.

Carmel Swim Club pulled off a rare accomplishment tonight, completing their sweep of the women’s relays at these Championships. The race was close for a while, as Phoenix Swimming hung around, but late into the relay, it became evident no one was going to stop the Carmel girls.

Alex Shackell, the 15-year-old competing in her 3rd race of the night, was the fastest leg of the relay. After taking 5th in the 100 free and winning the 200 fly, swimming best times in both, Shackell sealed the deal, splitting 48.65 on the anchor leg to put the race away.

Devon Kitchel led the team off, splitting 49.72. The swim was a personal best for Kitchel, marking her first time under 50 seconds in the event. Next up was Berit Berglund, splitting 49.31 on the 2nd leg. Gretchen Lueking clocked a 49.57 on the 3rd leg, handing off to Shackell. Carmel finished well within a second of the meet record, which is held by a SwimMAC Carolina squad that featured Alyssa Marsh and Erika Brown.

It seemed for a second that 14-year-old Thomas Heilman was about to break his 15th NAG of the last 11 days, just minutes after winning the 200 fly. However, the phenom fell just short, leading the Cavalier Aquatics off in 43.82, just a tick behind his freshly-set 43.51 mark from last week.

Once we got into the fastest heat, things got crazy. The race was incredible between Bolles and Dynamo, through the first 325 yards, then Baylor Nelson very nearly made another miraculous comeback for SwimMAC Carolina. Nelson anchored in a blistering 42.56, making up a huge amount of time on Bolles.

New Albany Aquatic Club was led off by Hudson Williams in a massive new personal best of 43.80. The 16-year-old dropped a full seconds from his previous best of 44.87, which he swam just a month ago. With the swim, Williams is now #20 all-time in the 15-16 age group.

the American record in this event is a 1:34.22 right? Which means the winner of this event was OVER 8 seconds off. Why are people celebrating this again?

Not sure what you’re talking about.

OK so Thomas Heilman would have been 5th at 2013 ncaas in the 200 fly ahead of Tom luchinger. That Tom I believe trained with Bowman and was a world’s qualifier and national champion in the long course format. So nbd. Given his heavy schedule at the end of a week of competition you have to imagine there is more in the tank. 1:41 at 14 seems a little absurd but feel like with a bit more rest we could have seen that time.

National champion later that year, if I’m remembering correctly. in a 1:55 I think?

Gemmell, Howley and Spink swimming fast at the NCAP International

So I guess Paris

How are these children swimming so fast? These times would’ve won NCAA division 1 back in the day.