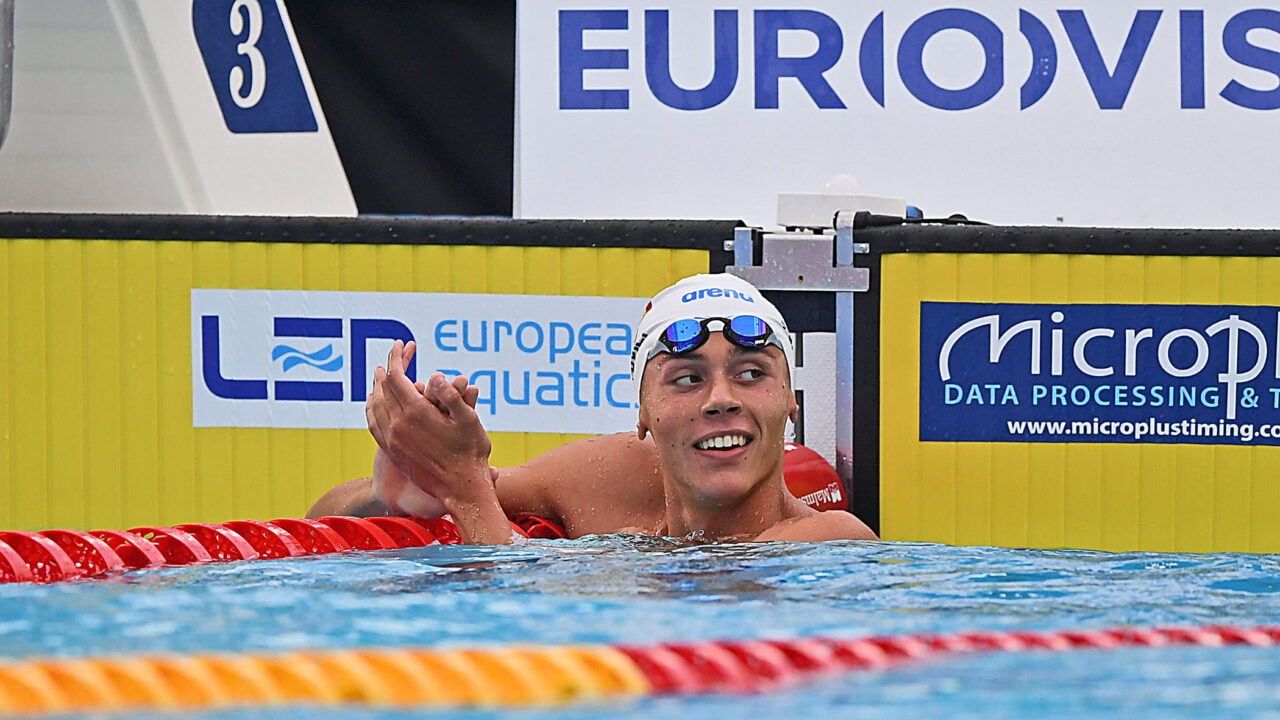 In October 2021 we took a look at six young men who were on the path to causing major disruptions in the 100m and 200m freestyle events at the 2024 Olympic Games in Paris.

Nearly one year later, we have more swims and more data to look at with this sextet, lending insight into how the chips may fall 2 years from now when an Olympic gold medal is on the line.

Some of these young guns have exploded while others are still stealthily laying low until it’s the right time to pounce. Regardless, let’s review where they’re at through the lens of international swimming with an additional year of races now logged.

Best Times Data as of October 2021

Moving on to 2022, David Popovici is no longer ‘stealthy’ by any stretch of the word. After a World Record in the 100 free at the European Championships, he now has the biggest ‘bounce’ of anybody in swimming, drawing eyeballs even more reliably than Caeleb Dressel. The teen’s monster swim of 46.86 overtook the longstanding WR Brazilian Cesar Cielo put on the books 13 years ago.

Popovici also made historic strides in the 200m free, dropping his personal best down to 1:42.97 to rank as the 3rd fastest performer of all time in the event. He now sits less than a second off of another longstanding WR, that of Germany’s Paul Biedermann‘s 1:42.00 from 2009.

Popovici shows no signs of stopping either, with this measured mentality yet feisty competitive spirit leaving his potential limitless.

Flynn Southam, the youngest of the bunch, made waves at this year’s Australian Age Championships, getting under the 49-second threshold in the 100m free for the first time in his career. The Commonwealth Games medalist shortly owned a personal best of 48.60 from that swim.  He also split 47.89 in the heats of the men’s 400m free relay there in Birmingham.

However, the teen had more in store at the Junior Pan Pacific Championships, clocking 48.23 for a new meet record. That means he has now closed in on the Australian Age Record for 17-year-olds, which is held by Kyle Chalmers at 48.03.

For additional perspective, Southam’s scorcher would have checked in as the American national age record for men 15-16. Luca Urlando owns the top time for Americans in that age range, having clocked a time of 1:47.73.

The remaining 4 members of this elite class stayed relatively at the same level in both freestyle events, save Matt Sates‘ big-time drop in the 200m free. The one-time Georgia Bulldog scored a huge 1:45.91 to crush his 2021 previous best of 1:48.08 and even surpassed his 2022 PB of 1:46.16 produced at this year’s South African Championships.

All told the South African dropped over 2 seconds in under a year in the 200m free.

Despite having competed at the World Championships and Commonwealth Games, GBR’s Matt Richards and Jacob Whittle did not make any major movements to their career bests.

The Bath swimmer punched a couple of sub-48 second relay splits this summer, hitting 47.58 as the prelims anchor on the World Championships 400m free relay while also hitting 47.91 in that event’s final.

Although Richards spit a tenacious 47.49 at the World Championships on GBR’s 400m free relay, the Olympic medalist missed the podium in the individual events both in Budapest and Birmingham.

We’re still waiting on Sun Hwang from South Korea to put himself back in the spotlight for 2022. He managed to snag silver in the 200m free at this year’s World Championships, posting a super solid 1:44.47. However, his 48.08 in the 100m rendered him 11th there in Budapest.

Look for Hwang to do some damage this December at the Short Course World Championships, however. He enters the competition as the reigning world champion in the 200m free.

There is no American on the list? What is the future of male US swimming??

Maybe transform that list into disrupt 7… I guess the MVP of the junior World Championships deserves it… Second best 17 year old in the 50 Free, best junior ever (any age) in he 50 Fly, top 10 ever junior in the 100 Fly and also a 48.5 in the 100 Free…yeah it’s Ribeiro. Maybe he deserves to be on the list too…

This article is about disruptors in the 100 and 200 free events. Ribeiro didn’t medal in either, and his PBs are 48.52 (respectable, but second slowest out of this list) and 1:50.82 (3 seconds slower than the slowest on the list).

He doesn’t belong in this article.

Obviously Popovici exceeded pretty much all expectations for both the 100 and 200 and is still on the rise.

Sunwoo hasn’t made major strides but did swim a PB when he won silver at WCs behind Popovici so I think he’s done well.

Southam has made significant improvements in both the 100 and 200. In any other year, he would probably be a bigger deal but he’s been overshadowed by Popovici’s jaw dropping year. Hope to see him continue upwards. Also, the final table lists his 48.6 in the 100 when it should be 48.23 from Jr Pan Pacs.

The other 3 haven’t done anything crazy yet but I wouldn’t rule them out. Whittle in particular feels like he’s going… Read more »

Big disrespect to Hwang here. Silver in the 200 behind Popovici and you are saying he hasn’t done enough to be in the spotlight?

you don’t put the spot light on the 2nd place guy.