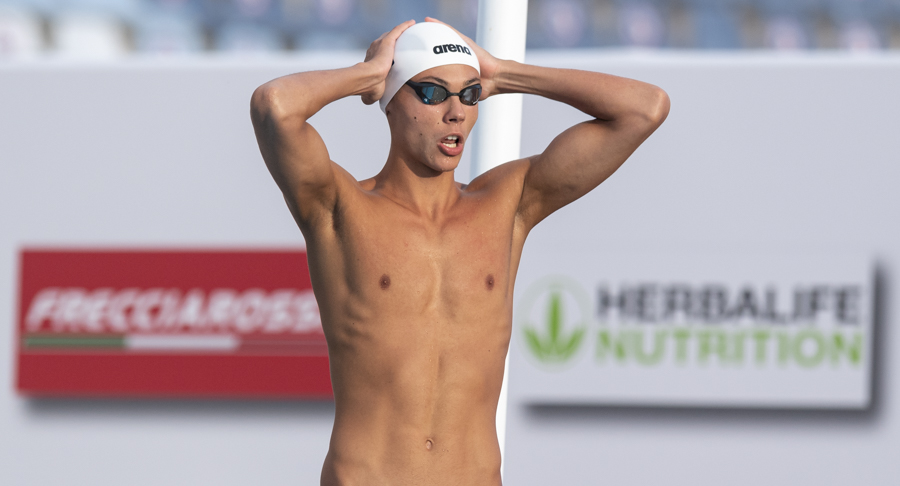 There are just over 1,000 days until the Paris 2024 Olympic Games but we're already examining the men's sprint freestyle talent that awaits. Archive photo via Andrea Masini / Deepbluemedia / Insidefoto

With the Paris 2024 Olympic Games fewer than 3 years away, swim enthusiasts are already taking a closer look at which young swimmers may prove to be breakout stars with more training and experience under their belts.

Already in Tokyo this summer we saw then-16-year-old David Popovici of Romania and 18-year-old Hwang Sunwoo of Korea make the finals of both the men’s 100m and 200m freestyle. We also saw Brits Jacob Whittle and Matt Richards contribute to their nation’s relays in a big way.

Since the Olympics, both Flynn Southam of Australia and Matt Sates of South Africa have lit up the pool in their respective nations and beyond, adding their names to the elite list of young guns on which to keep our eye.

With the aforementioned swimmers’ ages ranging from 16 for Southam on the younger end and Richards at 18 — going on 19 in December — on the older end, they comprise a stealthy sextet that may indeed bring a perfect storm of talent, training and maturity to Paris.

Before we get there, though, let’s examine what these young men have accomplished in the meantime across the common denominator events of the long course 100 and 200 freestyles.

As of today, Popovici owns this field with the quickest 100m freestyle to date, a 47.30 Romanian record he produced en route to gold at this year’s European Junior Championships. When he clocked that time as a 16-year-old in July, right before the Tokyo Olympics, it established a new World Junior Record and set the stage for his Olympic debut.

Although Popovici was slightly slower in Tokyo, ultimately finishing in a time of 48.04 for 7th place, the Romanian wrecking ball was perhaps even more impressive in the 200m free final.

Stopping the clock in a time of 1:44.68, Popovici wrangled up yet another World Junior Record and finished only .02 off the podium in 4th place.

Also eyecatching in that men’s 200m free race was Hwang of South Korea, with the dynamic athlete opening in a fearless 49.78. The 18-year-old wound up placing 7th in the race with a final mark of 1:45.26 but posted a 1:44.62 national record in the heats to introduce himself to the world.

Since then, Hwang’s most notable performance came just this week in the 200m IM at the Korean National Sports Festival. The teen logged a time of 1:58.04 in just his 2nd time ever racing the event. That result overtook the longstanding national record set by Park Tae Hwan, with Hwang becoming the first man from his nation to break the 2:00 barrier.

Also since Tokyo, South Africa’s Sates has been making some major noise across the short course meters pool. The University of Georgia-bound teen fired off three World Junior Records in the past two weeks while competing on the FINA World Cup circuit.

Although Sates’ long course best times in the 100m and 200m freestyle events are nothing extraordinary, they were produced before his short course siege, so we’ll have to wait and see what this young man has brewing in his tank for long course.

As for Richards and Whittle, their relay prowess has been proven, with Richards contributing to a new European Record in the men’s 4x200m free relay via his 1:45.01 split in Tokyo.

Both of the teens also pulled their weight in the prelims of the men’s 4x100m free relay, with Richards leading off in 48.23 and Whittle clocking the fastest split of the squad in 47.50, despite GBR placing 9th and out of the final.

That leaves us with the final member of this elite posse, that of Southam of Bond in Australia. At just 16 years of age, Southam is the youngest of the crew but holds his own in the conversation of potential disruptors in Paris due to his recent ventures.

In December of 2020, a then-15-year-old Southam broke through in a big way, firing off a big lifetime best of 49.66 in the men’s 100m freestyle at the Queensland LC Championships. His time overtook the Aussie Age Record of 49.68 held by multi-Olympic champion Kyle Chalmers.

Southam would drop that down to 49.55 in April of this year before taking a short break and not pursuing Tokyo.

Back in the game, Southam posted a mark of 48.05 in the short course 100 freestyle just a few weeks ago at the Queensland Championships, giving us a hint as to what this natural talent has in store.

We want to hear from you. Which of these stealthy six will impress us the most come Paris 2024, or is there another star bubbling beneath the international swimming surface who could spoil the party for these talented young men?

Karol Ostrowski is on the come-up. He’ll be 24 in Paris. Laid down a crazy freshman year yards and then turned around and dropped tons of time LCM and led off Poland’s 4×100 in 48.6.

If he keeps at it at this rate, he’ll be in the hunt three years down the line.

I am so pumped thinking about GBRs freestyle relays in 2024, so much potential. Hwang and Popovici the clear picks of these kids right now, but who knows what happens between now and Paris.

Team GB sprint freestyle is smoking hot at present in both quality & depth & most importantly youth now but men in 2024.

Manaudou is 100% going to swim in Paris, the 50 is very much still his playground in France, except for Grousset the field is a bit empty right now. He probably won’t medal unless he finds a way to follow the Ervin route

Dude shows up when it matters though, I am sure he will make the semi-final/final for his home games in the 50. Let’s just hope no one puts him on a 4×100 free relay, that will cost too much energy for a bid lad like him.

It’s almost crazier to me that we still expect 1:44.68 to medal. After Agnel’s 1:43, it felt like the floodgates were wide open.

7
-3
Reply
Talent is crucial in swimming
Reply to  Hank

Yannick Agnel‘s 1:43 and Kristof Milak‘s 1:50 are the most impressive swims in the last decade.

17
0
Reply
Robbos
Reply to  Talent is crucial in swimming

How does this get downvoted?

Peaty’s 57 mid would be most impressive, if he hadn’t kept doing it faster and faster

None of these guys would have been on the Tokyo list 3 years ago. There’s some current 13 year olds who are gonna show up and perform too

Not many 16 years old makes the Olympic 100 freestyle finals, you have to be pretty special.

I think Paris will be more competitive, less of a gap between all the finalists. I feel like swimming is getting to a point where in some events unlike 10 years ago, you can’t predict for sure who will win. The bar is getting raised higher and higher and all the swimmers around the world are only getting better. While individual finals are always hard to predict 3 years in advance I think I could say something for the relays. GB might be able to pull together something in the 4 x 100 to challenge the powerhouse of American Sprinters. If they keep Peaty in shape and Richards or Whittle develop into specialized sprinter better than Scott then they might… Read more »

3
-2
Reply
I win, you lose
Reply to  Just give the trophy to the condors already

He acted like a 5 year old in Gwangju, so in Paris he’ll be 10 years old. #easymath