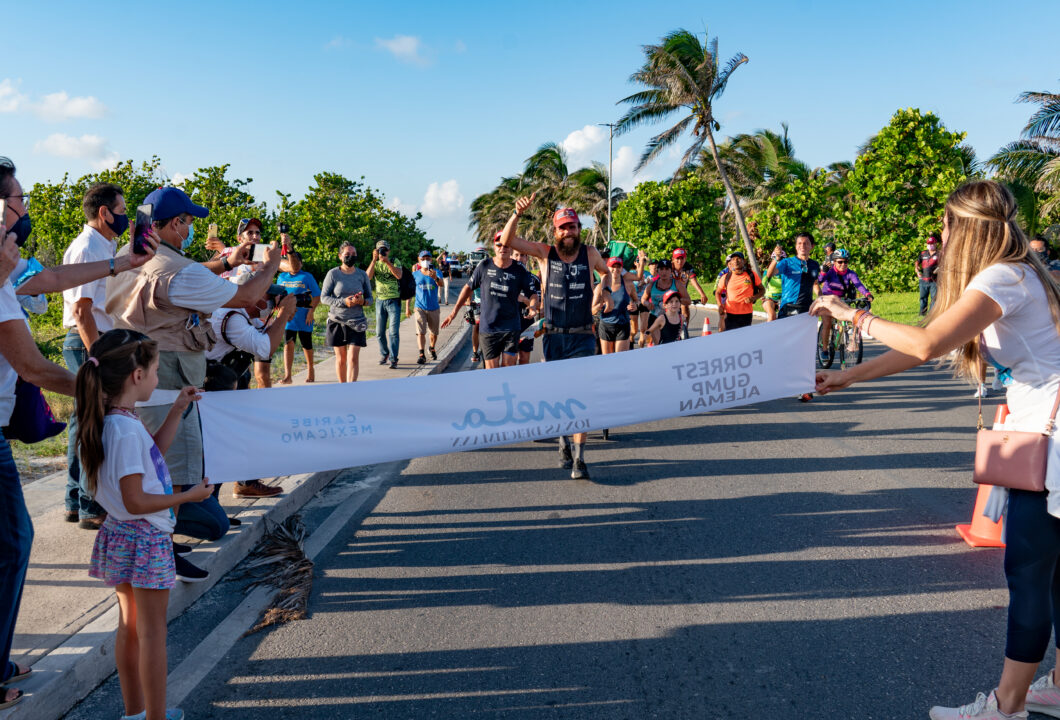 Germany's Deichmann is entering the final leg of his 14-month-long triathlon of circumnavigating the globe from Munich by swimming, biking, and running. Current photo via Markus Weinberg

This was part of his triathlon around the world (circumnavigating the globe from Munich, Germany by swimming, biking, and running) which began September 2020. The entire route is more than 120 Ironman’s, about 40,000 kilometers long.

He started this running leg in Tijuana back in June:

Deichmann ran across Mexico Forrest Gump-style, his press release says, referring to the movie character Forrest Gump who ran across the United States five times while attracting a following of people who ran with him.

He “crossed deserts, jungles, and high mountains … encouraging thousands of runners to run part of the way.”

34-year-old Deichmann documented his thoughts throughout the journey in brief weekly updates, sharing that the beginning was rough. He had just completed the 10,000-kilometer biking leg which took him through frigid weather conditions in Siberia.

“After 35 kilometres, it becomes noticeable that I have practically not run for the past 7 months,” he wrote in his week 35 update, citing leg pain and back pain from pulling the gear bag trailer for the next few days.

He cited the monotony of running past “bushes left and right” and avoiding the heat which rose up to 40 degrees Celsius (104 degrees Fahrenheit) at times with high humidity.

For his route from San Cristobal to Palenque, Deichmann had new running companions: 10 police officers. He continued to have police escorts, on-and-off, throughout the running leg.

During week 43, the local running club accompanied Deichmann and brought the local street dog who often runs with them, La Coqueta. But when the club went home after half a marathon, the dog kept following Deichman and laid down in front of his tent that night. He found a family in El Salto to adopt her.

In a village by Ocosingo, he was met with gifts of homemade sugar cane schnapps and podzole (a drink made from maize.) “A local specialty [here] is a rat stew, which is supposed to give a lot of strength, but luckily it is not ready yet,” he joked.

Deichmann continued to receive endless hospitality throughout his run, from being invited to a barbeque by the mayoral candidate of Pabellon, to dinners, guided tours of the cities, and often drinks and local fruit. A woman in Tehuacan offered him a total of 8 melons and to avoid being rude, he accepted the gifts. With the melons and about 15 bottles of drinks, he estimated his trailer must have weighed about 30 kilos (about 66 pounds) he struggled to make it up the hill.

The television and radio personnel were consistent and overwhelmed Deichmann a bit when he was in Tehuacan, he wrote.

“It gets hotter and more humid with every kilometre further down into the plain on the Pacific,” Deichmann said towards the end of his run. He ran 5 days across the coastal plain above Huzantlan, saying the heat gave him headaches and muscle cramps he had not had for years.

One runner here, a former football player named Taylor who had had his leg amputated due to a tumor, accompanied Deichmann on crutches and stunned him with his motivation.

By week 50, he was counting down the kilometers. More than 100 people ran with him in Tuxtla Gutierrez where he was also welcomed by a marimba band.

The scenery became “boring” again in Campeche where the roads were straight and enveloped by bushes on either side. The mayor of Merida gifted him a pyramid and palace made of stone, each weighing about 4 kilos. “Very interesting,” Deichmann wrote.

“Arrival in Cancun is Monday 1:00pm,” he said, predicting his picturesque finish where he was met by many cheering fans.

He posted some statistics of his run on social media, saying he went through 11 pairs of shoes. The longest distance he ran in one day was 65 kilometers or about 40.4 miles.

He will head to Portugal where he will begin the final part of his 120 Ironman-long triathlon around the world: a 3,500-kilometer (about 2175 mile) cycling path to Munich.

For now, he is recovering in Cancun for a few days and planning the final cycling leg to Munich. He is excited to be reunited with his bike which he lovingly refers to as “esposa” or “wife” in English.

Deichmann holds the World Records for multiple cross-continental crossings including Eurasia, Panamerica, and from North Cape to Cape Town. He added the World Record for the longest unassisted open water swim (450km) during his current triathlon in December, setting the new record at double the previous record from 2016.

His completion of this 40,000km journey would also shatter the current World Record for the longest triathlon, set at 6,759.8km by the same man who held the previous unassisted open water swim World Record, Sean Conway.

Full Triathlon Around the World Timeline: