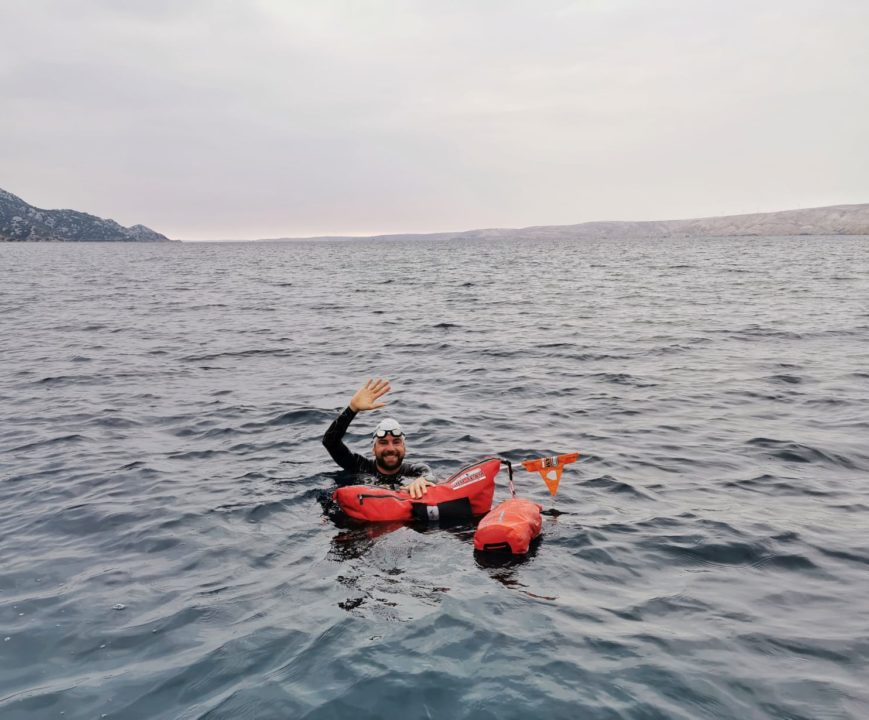 Jonas Deichmann (above) has embarked on an estimated 40,000km, 12-month-long triathlon that circumnavigates the world. The current record is less than 7,000km Current photo via Markus Weinberg

Estonia has found its new breaststroking ace, as 14-year-old Eneli Jefimova ripped a lifetime best by 3 seconds while competing in Latvia.

Jonas Deichmann, a motivational speaker and extreme athlete from Germany, has begun the world’s longest triathlon – an estimated 40,000 kilometers (24,854.8 miles) – with a path that circumnavigates the globe.

To put this distance into perspective, Deichmann will travel over 120 Ironmans with no escort vehicle and a minimal carbon footprint. He said in a press release that one major motivation for doing this triathlon is “to show that it is possible to travel the world in a CO2 neutral way.”

‘I’ve always dreamed of circumnavigating the world without an aeroplane,” he said.

Deichmann started the triathlon in Munich, Germany on Saturday, September 26th as he began the cycling leg to Croatia.

Currently, Deichmann is tackling the swimming leg which began in Slovenia. He will swim 456 kilometers (283.3 miles) along the coastline to Dubrovnik, Croatia towards Montenegro. As he swims he will be pulling a raft which carries equipment for setting up camp each night.

Thirdly, Deichmann will cycle across Europe and Asia to the coast of China. Once there, he will be hitchhiking on a boat to cross the Pacific Ocean and land in San Francisco. In North America he will run 5040 km (3,131.7 mi) from San Francisco to New York. Deichmann will board a boat again to cross the Atlantic Ocean, taking him to Lisbon where he will end the triathlon by cycling back to Munich.

The entire journey is estimated to take 12 months.

To prepare for this trip and the extreme weather conditions he will encounter in Siberia, the Gobi Desert, and the Himalayas, Deichmann trained at -25 degrees Celsius in Deutsche Bahn, Minden and circumnavigated Germany along the outer borders in triathlon style.

The press release states that Deichmann has already set 3 world cycling records: “Eurasia from Portugal to Vladivostok in 64 days, the legendary Panamerica from Alaska to Tierra del Fuego in 97 days and finally the distance from the Cape North in Norway to Cape Town in South Africa in 72 days.”

Sean Conway, a Zimbabwean adventurer, currently holds the record for completing the world’s longest triathlon: 4,200 miles (6,759.8 km). Deichmann would be breaking that record by about 33,240 km when he arrives back in Munich in the spring of 2021.

Deichmann has been posting daily updates on social media to keep his followers informed about his progress and the weather conditions, most always with a smile on his face. Saturday was day 7:

The German adventurer and extreme sportsman Jonas Deichmann has started his next  record-breaking challenge – the longest triathlon, from Munich around the world to Munich.  During his journey, he will cover the distance of 120 Ironman’s with a minimal CO2 footprint.

Jonas started in Munich on Saturday 26 September 2020 on his bike and has already crossed  the Alps in snow and continuous rain. He is now in Slovenia and will initially cycle on to  Croatia. From there he will swim 456 kilometres along the coast towards Montenegro. Back  on the bike he will cross Europe and Asia until he reaches the Chinese coast, where he plans  to cross the Pacific Ocean to San Francisco on a sailing boat. The next stage will take him  running 5040 kilometres across North America to New York. On board of a sailboat he will  then cross the Atlantic to Lisbon and then cycle back to Munich, where he left about 12  months earlier. All in all, Jonas will cover the distance of 120 Ironmans and cover about  40,000 kilometres.

To prepare for the enormous demands on body and material that await him when crossing  the Himalaya, Siberia and the Gobi Desert in winter, Jonas has completed an extra training  session in the cold chamber of Deutsche Bahn in Minden, at minus 25° Celsius, and  circumnavigated Germany along the outer borders in triathlon.

The extreme triathlon is not the first demanding project of the multiple world record holder.  The Munich and Swiss by choice is the first to set cycling records on all three major  continental crossings: Eurasia from Portugal to Vladivostok in 64 days, the legendary  Panamerica from Alaska to Tierra del Fuego in 97 days and finally the distance from the Cape  North in Norway to Cape Town in South Africa in 72 days – a whole month faster than the  previous world record. ” I’m beginning to miss the challenges on the bike, and I’ve always  dreamed of circumnavigating the world without an aeroplane,” says Jonas.

As always, the adventurer will complete all 3 disciplines without an escort vehicle. During  the swim he will pull a specially made raft behind him and then swim to the coast at night to  set up camp. Also on the bike and run course he will transport all his equipment himself and  camp along the course. “Apart from the enormous distance, the logistics will also be a great  challenge. There are currents and winds on the sea and only small time windows for crossing  the Himalaya and the oceans. I also have to find a sailboat across the oceans, as I will be  hitchhiking,” explains Jonas.

With his project, the well-known motivational speaker wants to draw attention to the fact  that it is possible to travel the world in a CO2-neutral way. He expects to reach the finish  line in Munich in spring 2021, and will surpasse the previous record set by the Zimbabwean  adventurer Sean Conway, who circumnavigated Great Britain in the triathlon discipline.

Wow! Best of luck to him!

//Jesus Christ, that’s insane, nothing like a pandemic to get you active eh. Best of luck