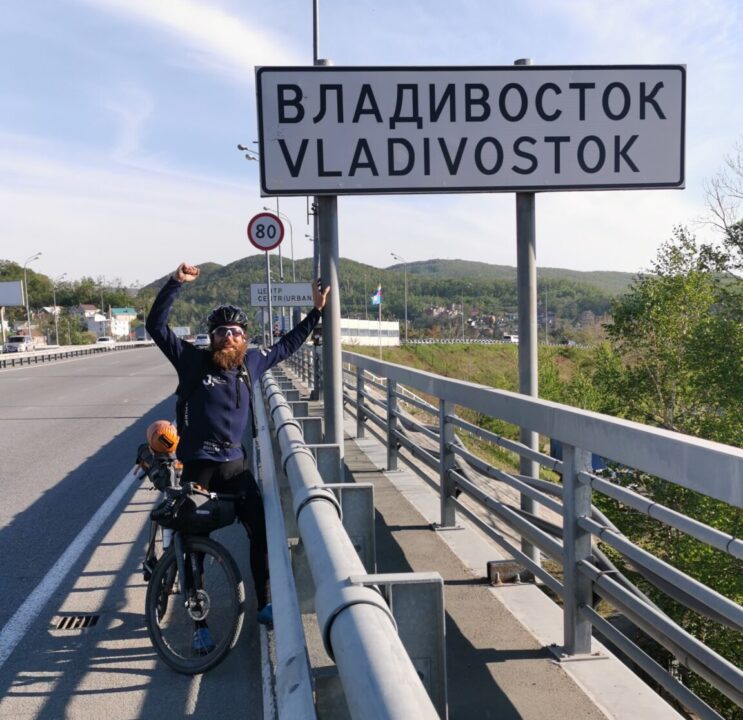 Deichmann arrived in Vladivostok, Russia on Tuesday. After nine weeks of cycling through Siberia, he has completed 3/5 legs of his 40,000km triathlon. Current photo via Markus Weinberg

German extreme athlete Jonas Deichmann reached Vladivostok, Russia on Tuesday after nine weeks of cycling through the frigid weather of Siberia. This checkpoint completes the third leg of his 40,000km triathlon around the world, a trip that began in September 2020.

For background on his journey so far, you can read our updates on his trip here:

“Cycling across Russia in winter has been an amazing way to have an absolutely miserable time,” Deichmann wrote on social media.

One of Deichmann’s first stops, when he came close to Vladivostok, was to a bike repair shop. He had been having technical problems for the past 1500 kilometers.

“I have been riding for 1500 kilometres with a defective rear wheel bearing,” Deichmann wrote in his week 33 update on his website. “The chain urgently needs changing, the sprocket is loose and the brake pads need changing. The bike community of Khadorovsk has heard about me and 3 riders come to the bike shop and accompany us on the way out of town.

Deichmann was welcomed by the local cycling community when he arrived in Vladivostok.

According to his social media, Deichmann celebrated with some sightseeing in Vladivostok, a dip in the 9-degree Fahrenheit Pacific Ocean and a trip to a Russian sauna with his crew including photographer Markus Weinberg.

Deichmann’s methods of traveling across this 40,000-kilometer journey are triathlon-style: swimming, cycling and running. Besides a couple of boat rides, he plans to physically get himself from Munich, Germany, around the globe and back to Munich with a minimal carbon footprint. The route circumnavigating the globe is more than 120 Ironmans long.

As of Tuesday, Deichmann is three triathlon legs down, with two to go and he is almost eight months into this endeavor.

Deichmann already holds the World Records for multiple cross-continental crossings including Eurasia (from Portugal to Vladivostok) in 64 days, Panamerica (from Alaska to Argentina) in 97 days and from North Cape to Cape Town in 72 days. He added the World Record for the longest unassisted open water swim (450km) during his current triathlon in December, setting the new record at double the previous record from 2016.

His completion of this 40,000km triathlon would also shatter the current World Record for the longest triathlon, set at 6,759.8km by the same man who held the previous unassisted open water swim World Record, Sean Conway.

Originally, Deichmann planned to take a boat from Vladivostok to San Francisco, California. From there he planned to run across the United States to New York and sail from the ‘Big Apple’ to Lisbon, Portugal where he would cycle back to Munich. He predicted he would arrive back in Munich in the spring of 2021, but that date has been pushed back.

The coronavirus pandemic has shaken things up a bit, forcing Deichmann to look for other points of entry besides the U.S. or Canada. His first encounter with closed borders was in Turkey where he had to wait to obtain a Russian visa. Now, he is looking for a boat and is considering traveling through Mexico.

“As the next stage Deichmann will cross the Pacific and is currently looking for a sailing boat,” Deichmann’s press release states. “Since the entry into US or Canada seems almost impossible due to Covid he is now planning to run 5.000 km from Tijuana to Cancun across Mexico. His arrival back in Munich is expected in the end of the year and he will have covered the equivalent distance of 120 times Ironman by then.”

Deichmann also cites hazardous traveling conditions, mainly traffic and weather, in Siberia as another reason he predicts the trip will take longer than the 10-month timeframe he originally planned for.

German adventurer Jonas Deichmann has completed leg 2 of his Triathlon around the world and reached Vladivostok after 17.000 km and a challenging winter crossing of Russia by bicycle. He had started his circumnavigation despite the Covid pandemic. His further route is still uncertain as he is facing border closures.

Deichmann started his project on the 26th of September in Munich. He cycled across the Alpes to the Croatian coast and then swam 460 km to Dubrovnik completing the longest swim ever without a support boat in 54 days. Deichmann continued cycling Eastwards from Dubrovnik with the goal of reaching the Pacific in spring.

Due to the pandemic and border closures the adventurer had to adapt his route several times and needed to detour to the long and hazardous route across Ukraine and Russia. In the Western part of Russia he faced deep mud and horrible road conditions as he tried to avoid the life threatening main roads with heavy traffic. Further East he faced Siberian winter conditions with snow storms, extreme cold and vast wilderness. As always Deichmann is undertaking his adventure unsupported and carries all his gear himself. “Cycling across Russia in winter has been an amazing way to have an absolutely miserable time”, summarizes Deichmann.

Today the extreme athlete reached the Pacific town of Vladivostok together with filmmaker Markus Weinberg who has accompanied him for the past week. And received a great welcome by the local cycling community.

As the next stage Deichmann will cross the Pacific and is currently looking for a sailing boat. Since the entry into US or Canada seems almost impossible due to Covid he is now planning to run 5.000 km from Tijuana to Cancun across Mexico. His arrival back in Munich is expected in the end of the year and he will have covered the equivalent distance of 120 times Ironman by then.

The extreme athlete already holds several world records and has completed all big continental crossings by bike in record time: Eurasia from Portugal to Vladivostok in 64 days, the legendary Panamerica from Alaska to Argentina in 97 days and the route from North Cape to Cape Town in 72 days – a month faster than the prior world record.

A book and film about his current project will come out after completion.