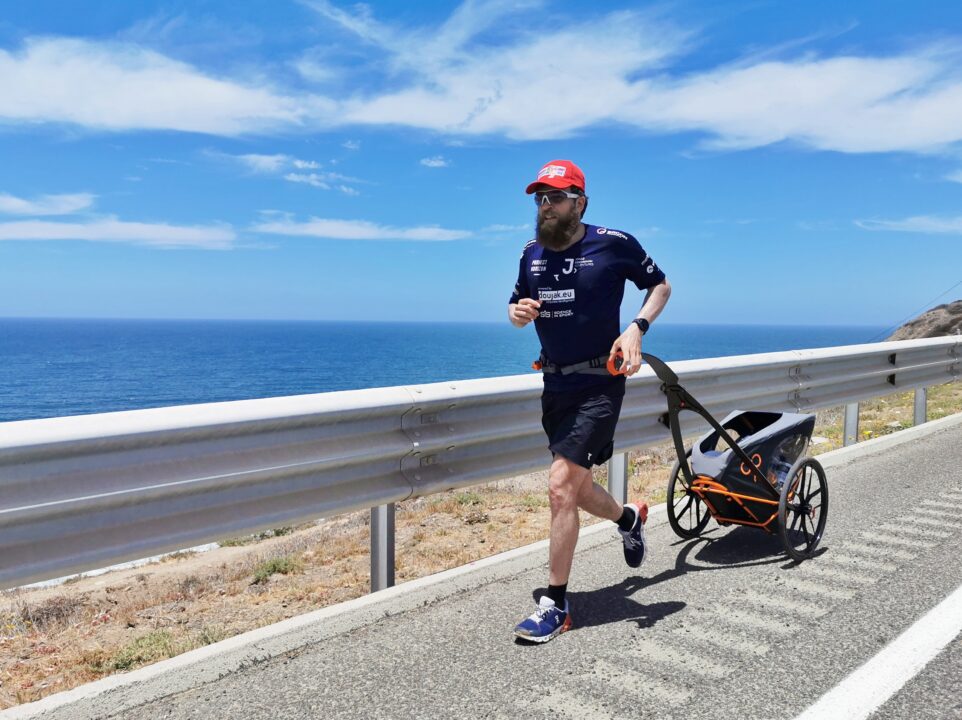 German extreme athlete Jonas Deichmann is 8.5 months into his 40,000km triathlon around the world. He arrived in Tijuana on Thursday to start the fourth leg. Current photo via Markus Weinberg

On Thursday, German extreme athlete Jonas Deichmann set off on the fourth leg of his 40,000 kilometer triathlon around the world. He will run the length of 120 marathons across Mexico, more than 5000 kilometers.

He plans to tackle a marathon, about 42 kilometers, a day. His route starts in Tijuana and he will arrive in Cancun in about four months.

For background on how the past eight and a half months of his journey have gone, you can read our updates on his triathlon here:

“Time for the biggest run of my life,” Deichmann wrote on social media on Thursday.

One of Deichmann’s main focuses of his triathlon was to circumnavigate the globe, from Munich, Germany back to Munich, with as few carbon dioxide emissions as possible.

This meant traveling solely through swimming, cycling, running (triathlon-style), and sailing when necessary. He had planned to sail from Russia to Mexico where he would start this running leg, but Deichmann was unable to find a boat before his Russian visa’s expiration date.

“Since Vladivostok freezes over in winter, the sailboats are taken to Korea and could not yet be brought back now because of Corona,” Deichmann explained in his week 33-34 blog update. “There are only a few ships from here to Mexico and the cargo ships are currently not allowed to take anyone because they sail in corona bubbles. I’m giving myself a few more days to really try everything, but my visa is about to expire and then I’ll have no choice but to fly to Mexico.”

“It’s a shame that I have to fly across the Pacific, because I wanted to travel around the world as CO2-neutrally as possible. But that doesn’t change anything about the triathlon and I will make a compensation payment to a nature conservation organisation for the CO2 pollution. In the end, I had no choice,” Deichmann said in his week 36 update.

This was his second recent change in plans. Deichmann originally prepared to sail from Russia to San Francisco and run across the  United States, but visa restrictions changed his destination to Mexico.

As far as running a marathon a day after cycling for about three months straight goes, Deichmann says he got off to a rough start.

“I was in a lot of pain when setting off but then it got better. I guess that’s normal when you run a marathon after no running for 7 months,” Deichmann joked on social media. “But my body is already adapting to the new challenge.”

Deichmann will now run the 5000+ kilometers along the Pacific coast from Tijuana to Cancun. He runs while pulling a cart of gear and food behind him.

From there, it looks like he plans to sail across the North Atlantic Ocean and cycle back to Munich.

“Cycling across Siberia in winter was a great way to have an absolutely miserable time. Summer in the Mexican desert has never seemed more appealing,” Deichmann said in his press release.

Deichmann is encouraging people to run on their own and donate one euro per km to two charities: Oxfam Deutschland and World Bicycle Relief. The first is a global emergency aid organization and the latter delivers bicycles to people in rural areas.

German adventurer Jonas Deichmann is currently in the middle of a Triathlon around the world and has started the running leg of 120 marathons in 120 days. Ahead of him are 5.000 km across Mexico.

Deichmann started his project on the 26th of September in Munich and cycled across the Alpes to the Croatian coast. He then swam for 450km through the Adriatic Sea and reached Dubrovnik after 54 days in the water. With his swim he set a new record for the longest swim without a support boat.
Deichmann continued cycling Eastwards from Dubrovnik with the goal of reaching the Chinese coast in spring, then cross the Pacific and run across the US. However, border closures due to the Covid pandemic forced him to change his route. Instead of the planned Southern route he cycled via Ukraine to Russia and crossed the country during the ice cold Siberian winter. After 17.000 km he reached Vladivostok on the Russian Pacific coast on the 17th of May and wanted to cross the Pacific to then run across the US. However, due to visa restrictions he had to adapt his route one more time and runs from Tijuana to Cancun across Mexico. He has already seton on the 9th of June.
While he faced extreme cold on the bike in the Siberian winter he will now experience the heat of the Mexican summer and 45.000 meters of climbing. “Cycling across Siberia in winter was a great way to have an absolutely miserable time. Summer in the Mexican desert has never seemed more appealing”, explains the adventurer. Deichmann, who undertakes his complete challenge without external support, will pull a trailer with gear and food behind him.

The German already holds multiple world records and is the fastest man to have cycled all big continental crossings: Eurasia from Portugal to Vladivostok in 64 days, the legendary Panamerica from Alaska to Argentina in 97 days and two years ago the route from Cape North in Norway to Cape Town in South Africa in 72 days – an entire month faster than the prior world record.

Deichmann wants to create awareness for climate change with his project and raises charity funds for World Bicycle Relief and Oxfam. Moreover, a book and film about his adventure will be released.

A marathon a day for 4 months? Oh golly

Last I checked this was swimswam not runran LMAO LMAO LOLOLOLOL