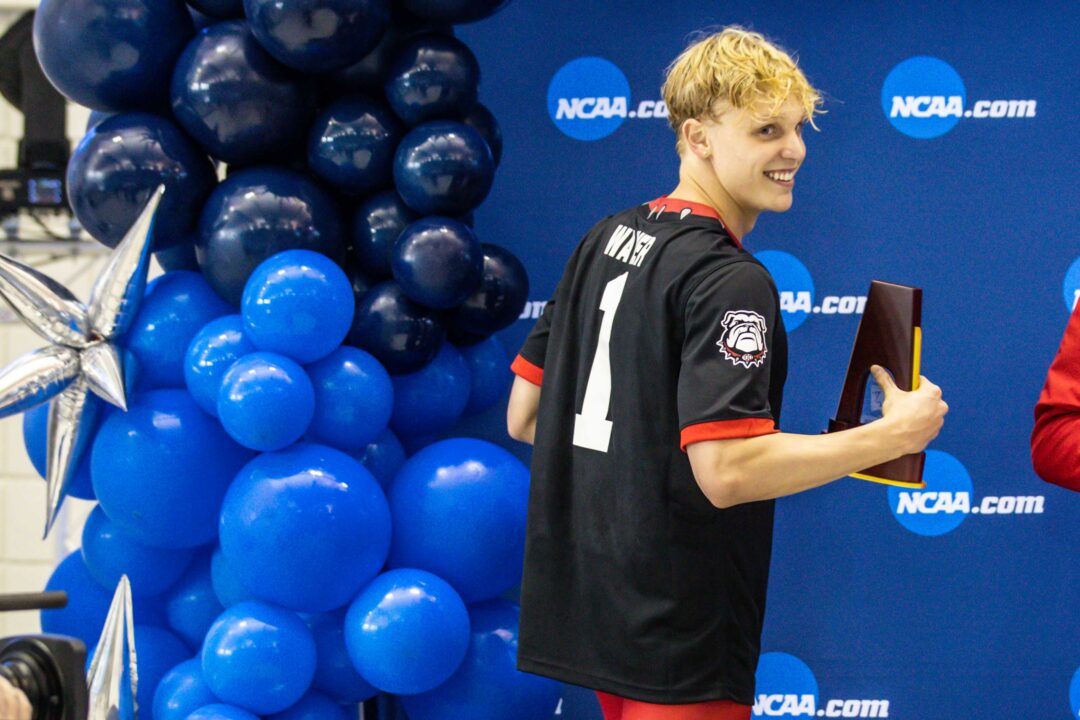 Matt Sates' pro career is off to a hot start, including breaking Tom Dean's Meet Record at the Mare Nostrum stop in Barcelona on Wednesday. Archive photo via Jack Spitser/Spitser Photography

18-year old South African swimmer Matt Sates has continued his success in his first series of meets since announcing he was leaving the NCAA to turn pro.

The Barcelona stop of the Mare Nostrum Swim Series began on Wednesday, and so far, the swimming has been faster than at the previous stop in Monaco. That included Sates’ 4:11.58 in the 400 IM and 1:45.91 in the 200 free, both of which are new personal best times and just-missed the South African Records.

Sates’ drop of more than a second on Wednesday came from the backstroke and freestyle legs. While he gave some of that back on the breaststroke (perhaps suffering from his effort on backstroke, or perhaps to wind up for a big push at the end), his new strategy paid off with a drop of 1.16 seconds.

His best time before this series was just a 4:25.43, though after a 4:01.98 in short course meters at the FINA World Cup stop in Berlin last October, it was abundantly clear that he had a better swim than that in him.

In his one semester racing for the Georgia Bulldogs, Sates only swam the 400 yard IM once, touching in 3:41 at a “Last Chance” meet between the SEC and NCAA Championships. He wound up swimming the 200 free, which conflicted with the 400 IM in the event schedule, at the NCAA Championships instead, placing 3rd in 1:30.72.

He also didn’t swim the 400 IM at April’s South African National Championships. He was selected for South Africa’s World Championship roster in other events, and now with a FINA “A” cut, is eligible to add that race to his schedule in Budapest if he chooses. He is qualified to swim the 200 free, 200 IM, 100 free, and 400 free at those World Championships. The 400 IM conflicts with the 400 free on the final day of competition, which would be a near-impossible double.

Sates now ranks 9th in the world this season in that event.

Sates finished the session with a 1:45.91 in the 200 free, and in the process beat out the defending Olympic Champion Thomas Dean.

Dean led the race most of the way, but Sates had a remarkable 26.58 closing 50 split to close the gap and grab the win. For comparison, only one swimmer, silver medalist Duncan Scott, closed faster than 26.58 at last summer’s Olympic Games, splitting 26.46 over his final 50.

Fast closing speed, and unique pacing, has become somewhat of a hallmark of Sates’: at the NCAA Championships, where he swam the third-fastest 500 freestyle in history, he had a very-fast closing 100 of 47.85, admitting after the race that he miscounted the event and probably had one more kick left in him.

Sates’ previous personal best was a 1:46.16 done in April at the South African Championships. He swam 1:46.69 in Monaco last week.

Even when Sates inevitably smashes 1:45.20, I’ll never forget that race from le Clos.

“… 400 free at those World Championships. Unlike at the Olympics, the 400 IM doesn’t conflict directly with any of those other races, though it is the same day as the 400 medley relay…”

The 400 medley relay conflicts with the women’s 400 IM on the last day. 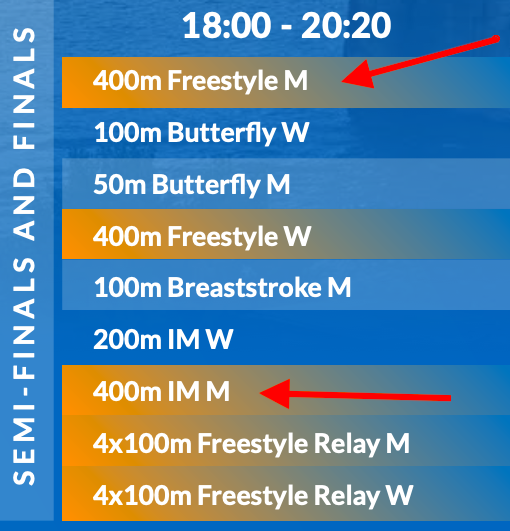 You’re right. Was looking at the women’s schedule.

I want to make fun of you for such an extensive post, but I find myself wanting to applaud you.