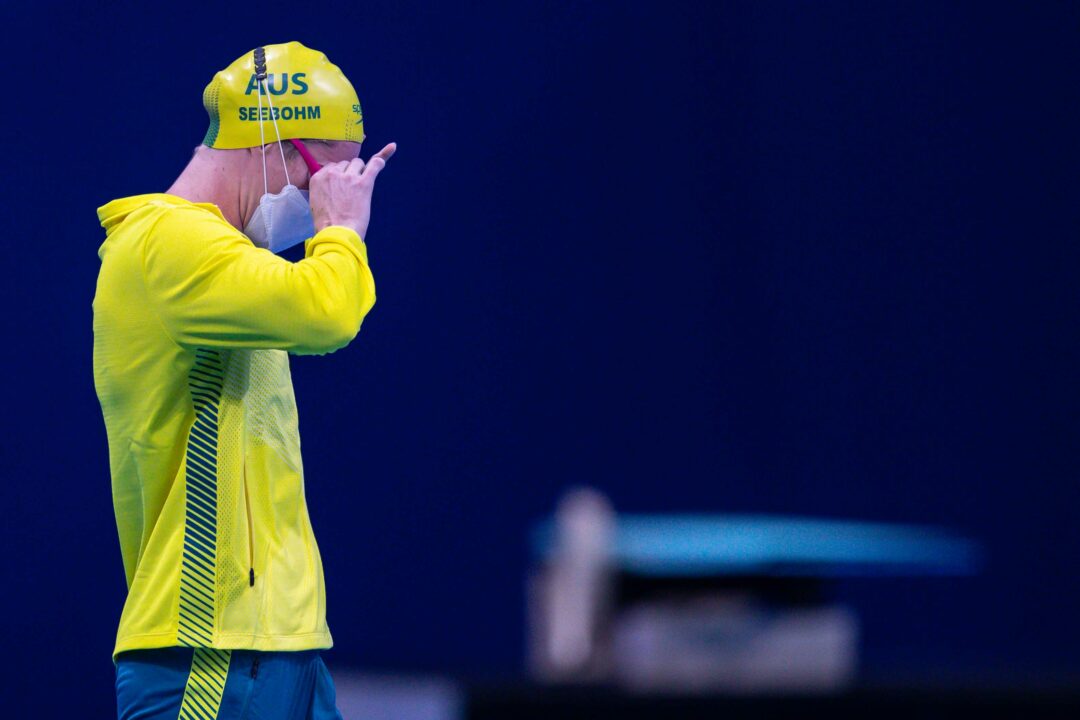 The Australian story in the women's 200m backstroke did not end with Kaylee McKeown's and Emily Seebohm's performances in the pool. Current photo via Jack Spitser/Spitser Photography

The nation of Australia has continued its medal-winning ways through day 7 here at the Tokyo 2020 Olympic Games. All told, Australia has collected its most gold medals (8) thus far since the 1956 Games in Melbourne. And, there is still one more session to transpire.

The momentum continued yesterday in the women’s 200m backstroke where a pair of Aussies landed on the podium together. Kaylee McKeown roared to the wall first in a time of 2:04.68 to grab the gold, while veteran Emily Seebohm nabbed the bronze in 2:06.17. In between with the silver was Kylie Masse of Canada, producing a mark of 2:05.42.

For McKeown, Tokyo represents the Chris Mooney-trained swimmer’s Olympic debut while for the other, Emily Seebohm, Tokyo is the icon’s fourth Olympic appearance. However, the experience time span has only served to bring the pair of athletes closer together.

20-year-old McKeown has looked up Seebohm for years, with the pair sharing a past photo on social media of a young McKeown and already national teamer Seebohm.

And the camaraderie between the pair carried onto the podium itself here in Tokyo, where Seebohm was the person who actually wound up placing the gold medal around McKeown’s neck.

On Instagram, Seebohm said of the unique event, “I asked Kaylee before the medal ceremony if I could present her the gold medal, she has been an absolute legend not just this meet but for years. I’ve watched her as a junior to being in her race when she breaks world records.

“Kaylee you are truly the most amazing humble beautiful person and giving you your medal and sharing the podium with you goes down in history as one of my favourite moments in swimming!”

After winning her 200m back gold medal, which marked her second along with taking the 100m backstroke, McKeown told SportingNews.

“We’ve all got each other’s backs. The Aussies just back one another. I’ve said it before, it’s an amazing team.

“We’re not like the Americans who make a big deal of it, but we do definitely tap each other on the back and we’re all really proud of one another.”

As far as the special moment, McKeown said,

“Em’s been around for a really long time, four Olympics, it’s not something many people get to do,” McKeown said.

“For her to come to her last Olympics and get third on that podium, I thought why not, she gets to stand on this with me, so why not bring her up to first where she also belongs.

“I found that (medal presentation) so special, it’s a real testament to who she is as a person and as an athlete as well. It was quite emotional.” (Sporting News)

Honestly one of the highlights of the Games. Cate and Emily getting bronze in their fourth Olympics, especially after both having issues in Rio, is absolutely inspiring.

I saw the F bomb and it was great! It was just a real moment and she was so exuberant. It was nice to see in fact, and darn funny.

What a beautiful gesture! I am an huge Team USA fan, but even though we are rivals, I love the Australian National Team. If we lose races to anyone, I would chose them first! A lot of class acts, amazing athletes, and even better people it seems like.

I think Australian and Americans in swimming have a lot of respect for each other but it doesn’t really come across that well on SwimSwam.

Because a subsection of American commenters spent the whole lead up going on about how Australian athletes were going to choke and didn’t stop it until like day 4.

Yes I agree. I’m guilty of it too. You can only hear “but Ariarne can’t win gold, remember Cate Campbell in Rio” so many times before you react.

Two years ago, Emily missed the Australian team for Worlds, and a year ago, everyone wrote her off for Minna Atherton, but she stayed the course and won a bronze medal in her fourth Olympics just half a second off her best time; no small feat at the age of 29. She joins Cate and Leisel as the only Aussie women to win medals in four Olympiads. Regardless of whether she retires or keeps going, her legend is assured.

Haha that’s what I thought. Not sure exactly what she is referring to? Possibly Lilly King comments?

Despite the bragging you might see in SwimSwam comments, it’s a pretty big part of Australian culture to be humble in your achievements, so the Aussies definitely took King’s comments in the worst possible way. But I actually do acknowledge that it was a throwaway comment that was probably blown up, and I don’t think Lilly is as cocky as people are making her out to be.

The subsection is fed by an annoying section of the USA media and once every 4 year fans who don’t know anything. Real swim fans love the Aussie-American competition and applaud that it brings the best out of all swimmers. None of the swimmers need vindication… Looking forward to the Paris time zone!

King set herself up to fail with her comment before the games. If your going to make such a bold statement you better be prepared to have a target on your back and something to prove, well she had the target on her back but wasn’t able to deliver in her pet event

We don’t make a big deal about it, but we post it on Instagram and talk about it 🙂

And the Aussies don’t jump to blaming losses on others use of roids. True sportsmanship.

lots of beautiful moments, led by Dressel’s graceful celebrations of his victory

What was the point of this comment? “Yeah this was nice but Dressel winning was better”. Really?