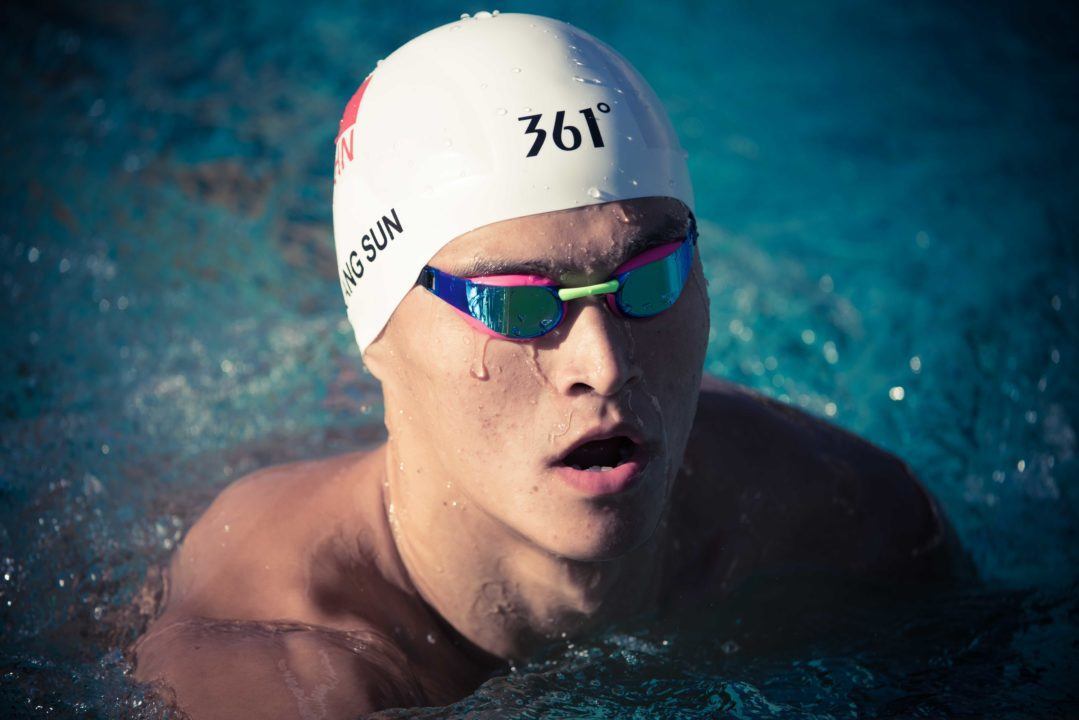 Can China's Sun Yang prevent France's Yannick Agnel from defending his 200m freestyle Olympic gold? Britain's James Guy and America's Conor Dwyer may have something to say about it. Archive photo via Mike Lewis/Ola Vista Photography

The 200m freestyle may prove be the most wide-open event of the entire men’s Olympic competition. Behind China’s Sun Yang and his current world-leading time of 1:44.82, there are 9 men holding marks in the 1:45 range this season. Past that tier, there is another group of 17 athletes with times in the 1:46 range, speaking to how tightly knit the entire field is heading into Rio.

The last time the Americans saw one of its own on the top of the podium in the men’s 200m freestyle event was in 2008 when Michael Phelps won gold in Beijing, paired with teammate Peter Vanderkaay in bronze. In the year previous, Phelps earned the men’s 200m freestyle World Championship title and represents the last man to follow his world championships gold with an Olympic gold in the event.

Britain’s James Guy, the 2015 World Champion, has a chance to follow in Phelps’ footsteps, currently ranked 2nd in the world with his time of 1:45.14 from Kazan. That stands as Great Britain’s national record and Guy has been dominant ever since, earning a national title at this year’s British Championships and continuing to comfortably score marks in the 1:46-zone. To earn gold in Rio, however, he’ll need to have the swim of his life to hold off the likes of China’s Sun Yang, the man who touched in silver behind Guy by just .06 in Kazan.

Earlier this year in Santa Clara, Sun Yang scorched the field with his incredible 1:44.82, the only sub-1:45-second time of the Rio qualification period. He’s already 7th on the list of all-time top performers, but the fact he threw down a time at a training meet that beat what it took for him to win silver at the 2012 Olympic Games is eye-opening.

At the London 2012 Games, Frenchman Yannick Agnel quite decisively took the reigns in this event, winning gold in a stunner of a time of 1:43.14, the only sub-1:44-second time of the field. In fact, Agnel is just one of 4 men who have ever ventured into sub-1:44 territory, accompanied by world record holder Paul Biedermann (GER), Phelps (USA) and Danila Izotov (RUS). His time represents the closest anyone has gotten to breaking the elusive 1:42.00 World Record held by Biedermann, some say courtesy of his 2009-era super suit.

Agnel will still be in the mix this time around, as the swimmer was given a last-minute chance to defend his Olympic gold after having qualified 3rd and out of the slots at the French Olympic Trials. With Jordan Pothain dropping out of the event, Agnel is back in, although he’s been off his game in this race over the past couple of years. His best time since London came at the 2013 World Championships where he clocked a 1:44.20 for gold. Since, however, the quickest Agnel has thrown down is a 1:45.97 from 2015. Unable to compete at last year’s World Championships due to illness, Agnel is anything but a sure lock for a repeat gold in this stacked event.

For Biedermann, he holds the world’s 4th-fastest time of last season with the 1:45.38 he earned in Kazan, rendering him bronze medalist in the event in which he holds the World Record. That outing in Kazan marks Biedermann’s speediest effort since his 2011 time of 1:44.88 in Shanghai to give him another bronze, this time behind Phelps and Lochte.

With America’s Lochte failing to qualify for the 200m freestyle event individually after having placed 4th at the 2012 Games, 27-year-old Conor Dwyer and newcomer Townley Haas are representing the stars n’ stripes. For Dwyer, he finished 2nd at the U.S. Olympic Trials and carries a best time of 1:45.41 into Rio. That’s enough to rank him 5th among the worldwide talent and be a serious risk to raining on someone’s medal parade. With Dwyer, it’s becoming now or never for the man to burn rubber and clock a 1:44-high, of which the Trojan Swim Clubber is capable. With the proper lane placement in the final, look for Dwyer to swim lights out next to Yang or Guy straight to the podium.

Although Haas topped the talent in Omaha, his result of 1:45.66 ranks 8th in the world this season, signifying that the young Longhorn would need to have the swim of his life to be a podium threat in Rio.

Dutch freestyle specialist Sebastiaan Verschuren is another guy who can’t be counted out of medal contention. Much like Dwyer, Verschuren is finding some “older man” speed that’s serving him well in the form of a 2016 European Championships title. The newly-minted gold medalist earned his title via a 1:45.87, the 2nd-fastest time of the 27-year-old’s career. As with the other competitors in this stacked field, Verschuren will need to have a breakout swim in order to first make the final and then hold off at least 4 other guys to snatch a medal for the Netherlands.

Not to be left out of the conversation is a dangerous Japanese weapon by the name of Kosuke Hagino. Typically dominant in the IM races, Hagino has proven he is a threat in the 200m freestyle event as well, owning a personal best time of 1:45.23. The 21-year-old was another no-show at the 2015 World Championships due to injuring his elbow just weeks before the start of the competition but he’s since come on strong with a mighty 1:45.50 outing at his nation’s Olympic Trials. He is certainly on the map for podium contention, but will have the 400m IM already under hist belt once this event rolls around on his schedule.

“The Professor”, Cameron McEvoy of Australia, up until he announced his dropping of this event, was lurking in the shadows, carrying a best time of 1:45.46 from 2014 and, more recently a 1:45.63 from this year’s Australian Championships. David McKeon will be swimming in his stead, but carries a personal best of just 1:46.37 from 2014, not enough to make a dent in the top ranks. The more likely Australian finalist is Thomas Fraser-Holmes, who tied with McEvoy for the win at Australian Olympic Trials.

Finally, Serbia’s Velimir Stjepanovic holds a personal best of 1:45.78 from 2014 and recently earned silver behind Verschuren at the 2016 European Championships. At that meet, Stjepanovic registered a time of 1:46.04 in semi-finals to give him the 11th-fastest time of the season, but the man still has a ways to go to surge onto the podium.

Dark Horse: Park Tae-Hwan from Korea was just cleared to compete after having served an 18-month doping suspension and appealing to the Court Arbitration for Sport to have a subsequent Korean 3-year ban removed. Park is free to compete now and will most likely be entered in this event, along with the 400m and 1500m freestyle races. At the few meets Park has since competed, he clocked a 2016 best time of 1:46.31, well off the 1:44.93 he scored in London to tie Sun Yang for silver. It’s hard to say where Park’s fitness is at with all of the drama surrounding his return and his inability to train at a national podium center, but he obviously has the international experience to bring a solid, medal-worthy performance into the final.

I know most of us don’t want to see it happen for obvious reasons.

But Park will probably be much more of a factor than 8th place.

Or not even making the final*

Haas will final I’m pretty sure. I could see him getting 5th place.

No townley haas in the final?