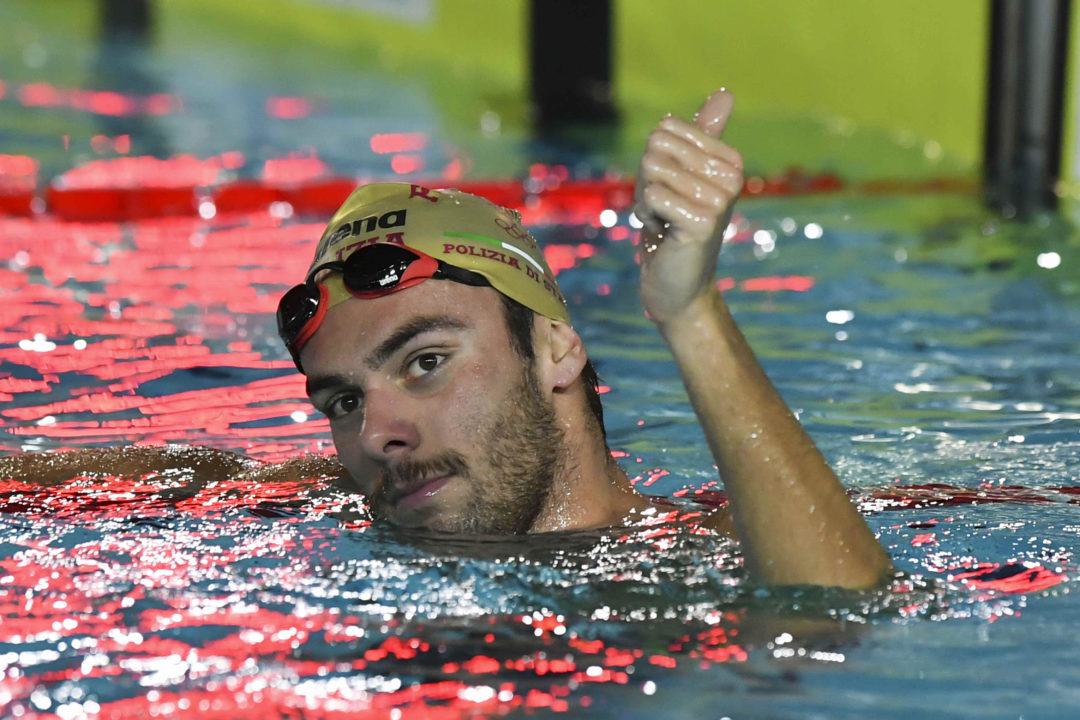 Federica Pellegrini, Gregorio Paltrinieri, Marco Orsi, Thomas Ceccon and Simona Quadarella were several of the superstars in the water competing at the Campionato Italiano Open in Riccione this weekend. Current photo via Gian Mattia D'Alberto / lapresse

The Italian swimming contingency put on quit the show in Riccione over the weekend, with stars such as Marco Orsi, Federica Pellegrini and young gun Thomas Ceccon producing head-turning swims.

For his part, 27-year-old Orsi set a new Italian National Record in the men’s 100m IM, clocking 51.57 to overtake his own previous NR effort of 51.76 from last year. You can read more about this historic swim here.

However, that swim was just 1 of 3 gold medals Orsi would collect by the time all was said and done, as the veteran also snagged winning times in the 50m free and 50m fly events. In the 50m free, Orsi crushed his previous season-best effort of 21.71 to capture gold in 21.41. That put just .06 between Orsi and runner-up Lorenzo Zazzeri, as Zezzeri touched in 21.47 for silver.

Rounding out the top 3 just .12 out of gold and .06 out of silver in that men’s 50m free was Andrea Vergani, who touched in 21.53 to round out the top 3. All 3 Italians now slide into the top 25 swimmers in the world this season in the 50 freestyle sprint.

Orsi’s winning effort in the 50 fly came in a time of 22.87, his fastest of the season in that event as well.

Youth Olympic Games multiple medalist Ceccon wreaked havoc on the men’s 200m IM event, registering a new Italian Natioal Reocrd, as well as a new European Junior Record. His winning time checked in at 1:53.26 and you can read more about his impressive effort here.

Rattling the SCM rankings in the men’s 200 backstroke event was Lorenzo Mora, as the 20-year-old to threw down a winning effort of 1:50.92 to win by over 2 seconds. His performance came within striking distance of the Italian National Record of 1:50.75 set by Simone Sabbioni at the 2015 European Short Course Championships in Netanya, Israel.

For Mora, his previous season-best rested at the 1:52.53 he produced at the Nico Sapio Trophy just last month. With his effort in Riccione this weekend, however, Mora now zips up the world rankings from #15 to #7.

Also coming close to an Italian National Record was Laura Letrari, with her sub-minute performance in the women’s 100m IM. Taking the title in a time of 59.88, Letrari represented the only racer of the field to dip under the 1:00 barrier, coming close to the NR of 59.56 set by Francesca Segat back in 2008.

A member of Italy’s swimming royalty, multiple Olympic medalist Federica Pelligrini, gave fans something to cheer for, as the 30-year-old took golds in the women’s 100m and 200m freestyle races. In the 100m free, Pellegrini represented the only racer of the field to nab a time under 53-seconds, clocking 52.81 for the win.

In the 200mm free, Pellegrini threw down a solid 1:55.31, about a second off of her 1:54.30 from Genoa, to stand atop the podium once again. The iconic racer told the media after racing that she had been out of the pool for a few days due to a fever, but is looking forward to racing the 100m free and relay events in Hangzhou later this month.

Also in the pool was Gregorio Paltrinieri, who easily defeated the pack in the men’s 1500m freestyle. His effort of 14:25.08 takes over as the top time in the world this season and puts a target on the 24-year-old Olympic champion’s back at the Short Course World Championships.

Yes, even Paltrinieri reminded Micka’s time in his post-race interview.
Overall a great two-days Nats considering that training’s finalization was for SC Worlds.
Particularly impressive Panziera’s result in 200 back (Panziera is much stronger in LC) and the 1.06 swum by Cusinato in 100 breast (her weakiest style), beyond Scozzoli’s consistency in 50 and 100 br.
Good news also is Marco Orsi’s recovery at high level (still not at his best in the free).