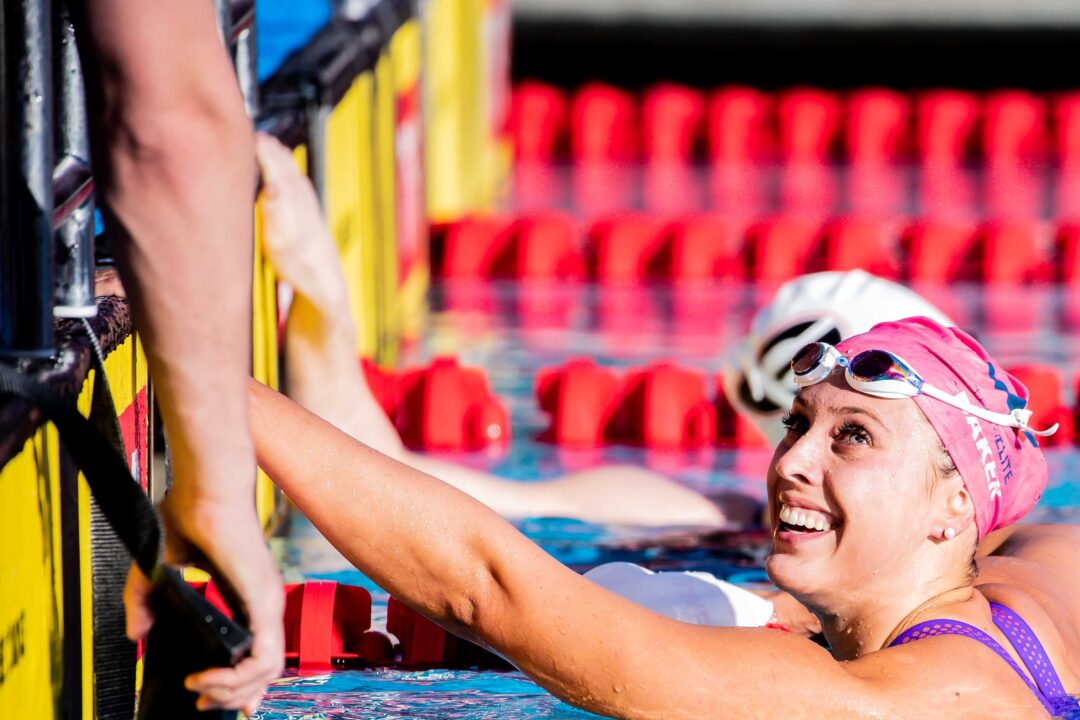 Olympic gold medalist Kathleen Baker has announced that she injured her foot in early May, a week before Wave II of the US Olympic Trials is set to begin. Archive photo via Jack Spitser/Spitser Photography

Olympic gold medalist Kathleen Baker has announced that she injured her foot in early May, a week before Wave II of the US Olympic Trials is set to begin.

In a post to her Instagram account, Baker mentioned that she had a “walking accident” that resulted in a fractured bone in her foot alongside a twisted ankle.

Despite the injury, Baker says that she has still been able to swim everyday and that she is still focused on Olympic Trials. However, it is unclear if the injury has affected her training routine.

“Little life update, in a freak walking accident in the beginning of May, I twisted my ankle and fractured a bone in my foot. While timing isn’t ideal, fortunately I’ve been able to be in the water everyday and am focused on trials. I’m so lucky to be surrounded by the best doctors, PT, coaches, teammates and friends and family I could ask for. And thanks to all of you for the tremendous support.”

This is not the first time that Baker has suffered an injury prior to a major meet. In April 2019, Baker suffered a rib injury that kept her out of several stops of the FINA Champions Series and caused her to drop the 200 IM from her World Championships line-up.

Baker is the reigning Olympic silver medalist in the 100m backstroke and the former record holder in the event. However, the field in the women’s backstroke events is extremely crowded at trials with other names such as Regan Smith, Olivia Smoliga, and Phoebe Bacon. Baker is also expected to swim the 200m backstroke and 200 IM in Omaha.

Shaine Casas moment. Prepare for a 57.5

Impressed by how positive she remains with this setback. Wish her the best.

You have downvotes, as well.

Wow you got the scoop. From the post this sounds like a minor injury as she has still trained everyday. It might work out as it is taper time. However you have to be 100% to make it at trials so we will need to wait and see.

TBH, I have been stressed out since your comment.

Maybe because it’s not really cool to publicly post information about someone’s health instead of letting that person disclose it to the public when and how they want to do it, if at all.

I am so very sorry and wish Baker the best. Still rooting for her.