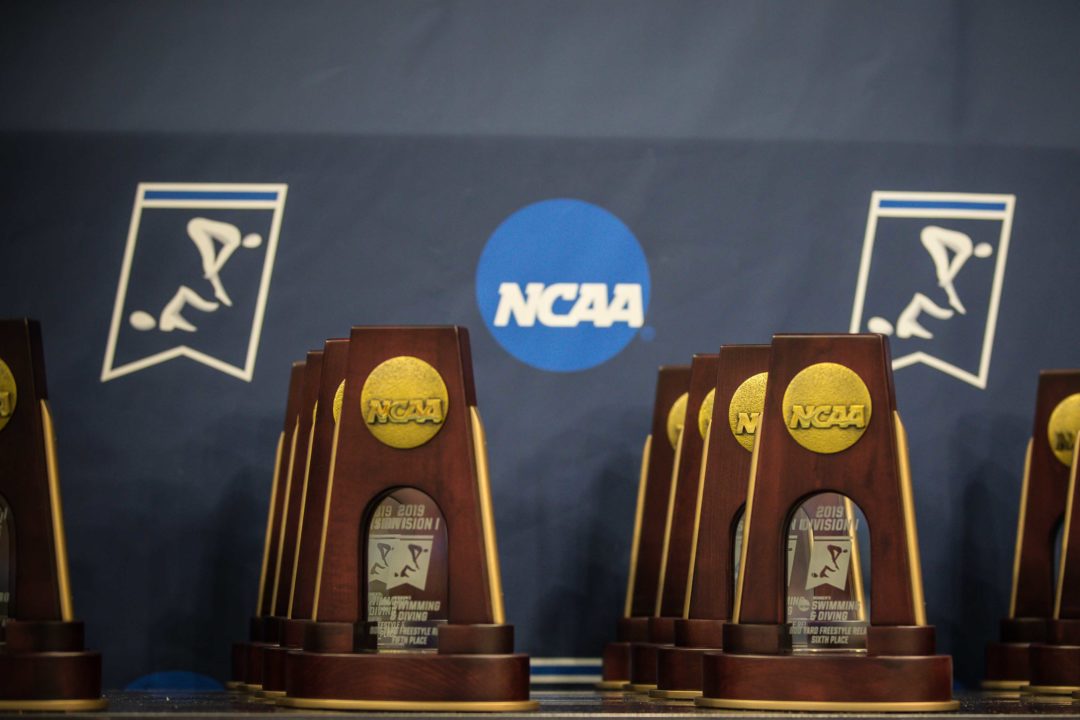 The NCAA has released the pre-selection psych sheets for the 2021 Men’s Division I NCAA Swimming & Diving Championships. Current photo via Jack Spitser/Spitser Photography

The NCAA has released the pre-selection psych sheets for the 2021 Men’s Division I NCAA Swimming & Diving Championships. These lists don’t dictate who has been selected to the NCAA Championship meet, but they do tell us a few things.

For one, the pre-cut psych sheets show us event selection for swimmers fast enough to hit qualifying times in more than the maximum 3 individual entries for the meet. Swimmers had to narrow the lists only to the 3 events they intend to swim.

Further, because more than 16 swimmers will be chosen per event, this allows us to begin scoring the psych sheets.

And finally, these lists will allow us to project where the cutline will eventually fall.

There can still be changes from these entries. Official post-cut entries, if historical patterns follow, will be released Wednesday. After their official release, if a swimmer scratches within 24 hours, they will be replaced by an alternate. This is a different procedure from prior years, where athletes could be called up until the meet began, because of additional COVID-19 policies put in place by the NCAA.

In all, there are many fewer “pre-selection” entries than we normally see. That’s because several top teams aren’t racing this year (Arizona State, the entire Ivy League), while many mid-major programs are running their regular seasons and conference championships into March and April. We often see virtually every swimmer with a “B” cut wind up on these sheets, even if coaches know they won’t get a call-up, which usually means well over 100 pre-selection entries per event.

This year, because of fewer entries from the power teams and far fewer “B” cuts from mid-major programs, which have been more likely to delay their seasons, every individual event has 115 or fewer pre-selection entries.

SwimSwam will break these entries down, look for the most interesting choices, and project where the cutline and scoring will come out.

Texas has 25 swimmers listed, but will have to cut to18 initially. And then after they qualify their usual 3 or 4 divers will eventually drop to 16 swimmers.

1
0
Reply
samulih
Reply to  So confused

3
0
Reply
Austinpoolboy
Reply to  So confused

Answer to question 3 is yes

I’ve got it at Texas 427 Cal 450. Someone lmk if the math is off. It was honestly really close until the 2 Back. Cal’s score may be a little low because Grieshop always performs best at NCAAs, also Whitley at 8 in the 100 breast is a lil unrealistic, plus Bjorn isn’t even set to score in the 100 free. Texas has room to grow with Katz in the 200 Back, not to mention diving. All in all it’s looking like it’ll be a really close NCAAs.

This is gonna be really fun. Especially with the magic Texas Taper, we should be in for some fast times

Cal was the one with the magic taper last NCAAs

Also with Destin Lasco and Hugo Gonzalez so low in the 2 IM / 2 Breast (respectively).. my moneys on a successful title defense for the bears

Notable from a quick look through:

Anyone see if Staka is in a 3rd event, I only see 1Back and 1Free?

Just noticed Pomajevich is in the same boat as Frankel, 100 and 200 fly from what I can see. Pretty weird considering the 4:10 from his freshman year, but oh well.

Casas 100 back no 400 IM. Very happy to see Braden Vines entered in the meet.

No Carson Vs Casas in the 400 IM but Hugo will keep him honest, and don’t forget Big Bobby Finke as a smoky

Yeah, I’m a little sad that we won’t get to see Foster vs Casas 400 IM, but oh well. Having a near second lead in a 100 yard race was too good for him to turn up i guess, plus at this point he must view himself as a backstroker primarily. Judging by Pac 12’s, Hugo’s got a bit more to give it seems, but Carson is still my pick in both IM’s.

What ? You would pick Carson in front of Shane and Hugo in the 200 IM???? Maybe you should check the psych sheets.

Bigger story is Foster vs Foster in 4im

WOW I THOUGHT IT WAS TODAY BUT WASNT SURE