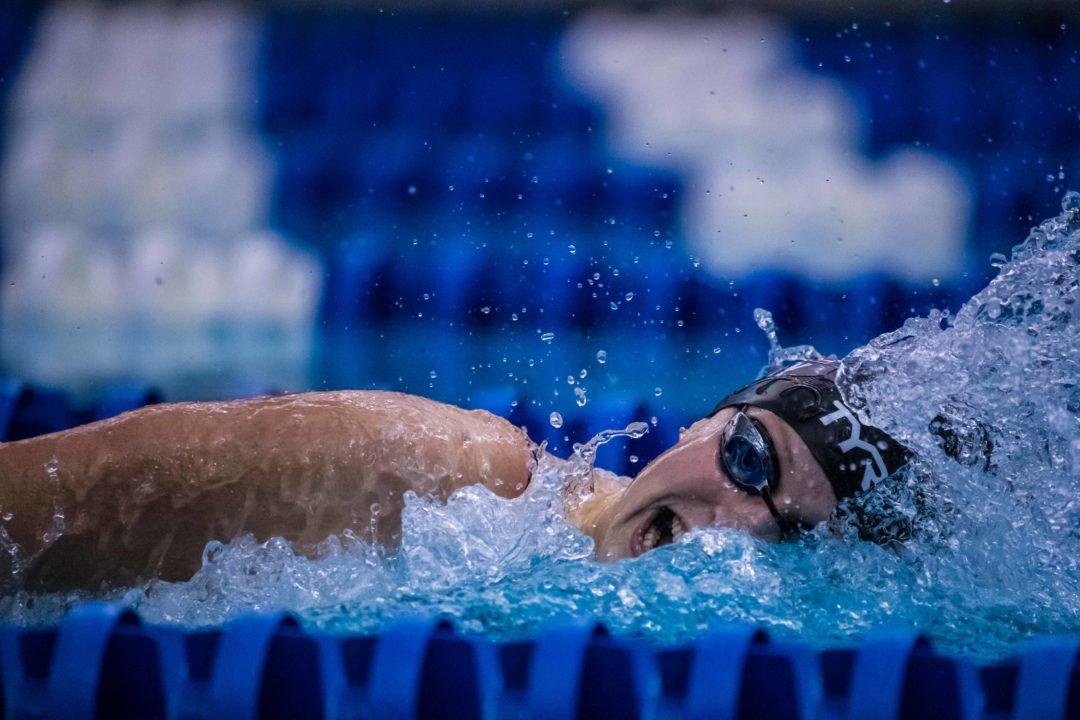 Katie Ledecky swam a time of 8:13.64 in the 800 free at the San Antonio PSS, which happens to be both the 22nd fastest time of her career and of all-time. Archive photo via Mike Lewis/Ola Vista Photography

During the 2022 World Aquatics Championships in Budapest, Brazilian superstar veteran Bruno Fratus set the 100th 21-point 50 freestyle of his career.

How can you compare

Closing out the San Antonio PSS, Katie Ledecky won the 800m free in a time of 8:13.64. That is the 22nd fastest time of her career, which also happens to be the 22nd fastest time of all time. With that swim, Ledecky now holds the 23 fastest performances of all time. Rebecca Adlington‘s former World Record of 8:14.10 comes in at #24, followed by four more Ledecky swims, then Wang Jianjiahe‘s Asian Record of 8:14.64 is #29, followed by yet another Ledecky swim at #30.

Put differently, Ledecky has 24 of the top 25 swims of all time, 28 of the top 30, and ultimately 50 of the top 200. That is a rarefied air of dominance. For some context, Michael Phelps and Ryan Lochte combined have only 47 of the top 200 performances in the 200m LCM IM (Phelps has 22, Lochte has 25. Surprisingly to us, neither of them actually has the most performances of those top 200).

Put differently still, here’s a visual representation of the 200 fastest performances of all time. The blue dots are Katie Ledecky, and the red dots here are anyone else:

And if we go one level deeper, and look in terms of the most appearances in the top 200 performances list? There, Ledecky’s 50 of the top 200 is actually not the most represented event. That honor goes to the Iron Lady, who owns a whopping 76 of the top 200 performances in the 100 IM SCM. Close on her heels is Alia Atkinson, with 74/200 in the 50 Breast SCM, and then a tie at 68 between Hosszu again in the 200 IM SCM and Sjostrom in the 100 Fly LCM. Ledecky is a mere fifth in this category, but actually in the 400 Free LCM (where she holds 65 of the top 200 swims).

Here’s a full table of all the events in which a swimmer has at least the top two times.

*Note that the SCY performances don’t have a count for the top 200 times due to lack of available data.

One of the interesting rows that stuck out for me was Grant Hackett in the 800 Free SCM. He has the top two times, but only two of the top 25, and only four of the top 200. Another is Caeleb Dressel in the 100 IM SCM. His 6 ISL swims last season in this event are probably his only swims in that event, and they make up the top 2, and 3 of the top 25. Meanwhile, Vladimir Morozov has 36 of the top 200, including the other 14 of the top 25, and the other 7 of the top 10 that aren’t Dressel. We’ll just have to wait and see what another ISL season will do to some of the SCM distributions.

It obviously makes sense to count the first 800m split, but it’s an interesting question of what to do about the rest of those.

Does anyone have any heart rate data for Katie for any of her races. I would love to see that compared to the competition.

Blue dots for Ledecky?!? Never. Cardinal would have been much more apropos.

Titmus is shivering reading this article…..

Timus is under no disillusion, she knows she will need to beat the WR to Ledecky & hopefully also touch the wall first to beat Ledecky in the 400 free.
She knows that Ledecky is the greatest female swimmer of all time & to challenge her in the 400 takes what no other women can do.
As for 800, I think there is no competition for Ledecky.

No disrespect to Katinka Hosszu, she’s actually a beast as far as how many times she swims races at a high level, but can we just acknowledge that 65 x 400 LCM free or 50 x 800 LCM free in a 9 year career is INSANE compared to 76 x 100 SCM IM?

15
-2
Reply
Troll in the Dungeon
Reply to  Penguin

I mean it’s insane on its own – it doesn’t have to be compared to another performance. On that basis, why not just say both are insane swimmers. Comparing apples and oranges – the 400 and 800 may be longer than 100 SCM, but they are not as explosive or intense. Different athletes, different races. Good on both of them for being outstanding in their own particular areas.

It should be awesome to see on that YouTube show Chart Party.

But on the last day she showed her ability to race. She knew how to conserve enough energy and be able to close the race at the end.

I don’t know if we’ll see another world record of her, maybe we will and all of us will be standing in our living rooms cheering her on.

Katie’s sub 8’/15′ change would force men to early retirement or push them into ows….plz, I do not disrespect anyone, maybe not funny joke, or just a loooong jaw dropping stare that would make cajones grow or shrink.