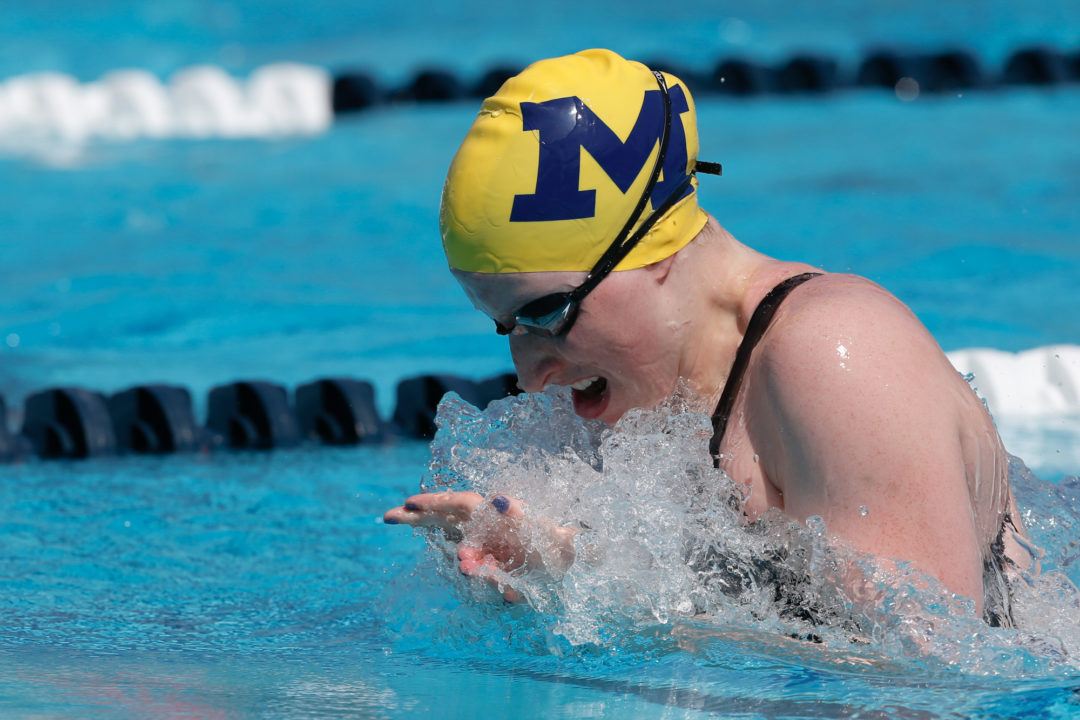 For the women this gives Michigan a slim 325-314 lead over Texas. The top two teams in our latest Power Rankings Stanford and Cal are next. Cal rank 3rd with 287 and Stanford are 4th with 256.5.

Michigan and Texas are both a long way ahead of where they were at this point last season. Texas are 134 points ahead of their mid season projection from last season. 92 of the 134 points gained come in the relays. Texas currently have 4 top 3 relays and 2 #1 rankings in the 200 and 400 free relays. Michigan are keyed by solid relays (154 projected points) and 100 points from their seniors.

While Michigan and Texas hold the top two spots, perhaps the most notable part of this ranking is the teams that aren’t in those spots. The two Bay Area teams Cal and Stanford are 3rd and 4th. Stanford are considered huge title favorites. They’re the unanimous #1 team in our latest power ranking, return the most swimming points of any team, and have the top recruiting class. Stanford led these rankings at this point last year with 382.5 points, 126 more than they have this year, but at nationals they scored a ridiculous 578 swimming points. A similar jump would easily vault them past the other top teams in the division, but this year’s team is very different from last year’s team. There are a lot few Olympic medals between them this year. So, how likely is that to happen again? First, let’s take a look at how they gained so many points last year.

Last year, Stanford didn’t have a time in the 800 free relay at this point in the season, so they were projected to score 0 points in an event the eventually won. That’s 40 points vs the projection for free. They also picked up 41 points vs projection in the other relays. Their next big points jump came from Simone Manuel who didn’t swim any meets in the fall while she was rehabbing an injury. Manuel scored 56 points at NCAA’s. The relay gains and Manuel accounted for 137 of 195.5 points Stanford gained. The rest came from swimmers on the bottom half of their line up picking up a few points each. For example, Leah Stevens went from a mid season projection of 6 points to 14 at NCAAs, or Megan Byrnes went from 0 at mid season to 15. The had 9 swimmers gain between 1 and 15 points. With nobody drastically falling off their mid season ranking, those small improvements across a bunch of scoring swimmers added up to about 60 more points.

Stanford don’t have a swimmer of Simone Manuel‘s caliber waiting on the bench this year, but there are plenty of opportunities to pick up points. This year, while they at least have a time in all 5 relays, they’re only projected to score 87 relay points. Their 400 free relay is ranked 23rd behind team such as Akron and Yale. They only have 1 relay ranked in the top 4 (the 800 FR). Stanford may not win all 5 relays again this year, but there is a lot of room to gain relay points.

On the other hand, just as Manuel isn’t waiting around to juice their individual points totals, she isn’t available to punch up their relays this year. Stanford’s relays all moved up a lot last year from mid season, but they were able to add the Olympic champion in the 100 free in the second half. This year they’ll have to move up with the same swimmers that put up those low ranked times in the fall. With their talent, scoring more than 87 relay points seems almost certain. The question is: how many more will they get?

In the individual events, similarly to last year, plenty of Stanford’s swimmers are ranked with room to move up. Taylor Ruck, who dominated Pan Pacs this summer and beat Katie Ledecky in a 200 free final, currently projects to score 26.5 points. Katie Drabot is projected to score 14 (she projected to 42 at this point last year, scored 49 at nationals). Stanford were a bit slower than last year at their mid season meet, so a relatively large drop wouldn’t be a surprise.

Cal has some work to do if they want to defend their 2nd place position. They are 27 points behind Texas in the current Swimulator rankings before accounting for Texas 51 returning diving points. Cal didn’t score in diving last year.

Cal did not have the dramatic points jump that Stanford got last year. They picked up 9 points at nationals over their mid season projection. Cal have 168 projected relay points this year, so there’s not much room to move up there. Their main opportunity to catch Michigan and Texas comes from the individual events where there are some opportunities to pick up meaningful points vs their projection. Amy Bilquist, who scored 27 points last year, is currently projected to score 0 after missing most of the fall season. Top ranked recruit in the class of 2019, Isabel Ivey is going to join the team in January and could give them a boost.

Despite Stanford and Cal’s ample opportunities to grow their point totals, these rankings are good news for Michigan and Texas. The door to 2nd place is open, and Stanford clearly aren’t the powerhouse they were last year. A comfortable Stanford win is still the probable outcome. However, if Stanford aren’t on form, teams are lining up to challenge them.

I’ll be doing write ups on the lower divisions and some of the conference rankings in the coming days, but if you want to see those rankings before those articles are written, feel free to run the simulation you are interested in yourself.

Cal is adding Bilquist, Ivey and Chloe Clark in January. Should help.

Chloe Clark isn’t racing this season, just taking classes, according to her club coach. But the other 2 for sure should have a huge impact.

Michigan ever got a backstroker they would be dangerous. Taylor Garcia nowhere close to her pre-transfer times.

We all got spoiled by Stanford’s dominance in the relays. The only one I can see them winning is the 4x 200 and their medley relays are a hot mess. No idea how they will manage top 5 in those. They have no flyer and if they use Ruck in backstroke it weakens their anchor.

It looks like they can still win though. They can score 350-380 and it should be enough. We can see how good a coach Meehan is this year. He screwed up by not recuiting in any sub 22 level sprinters. Look at Tennessee or NC state that is what u need at NCAAs

Amalie Fackenthal – 53 in a dual meet this year and they did not do a long rest for the Ohio State Invite. I can see her splitting a high 50 to low 51 in the 400 medley relay (which is about where Janet Hu was last year). Eastin went 51.4 in a 100 backstroke. I see them top 3 if not winning it. Ruck will most likely anchor in 46 low to 45 high. Bartel, Williams, or Zhao will do breaststroke, and that seems to be the key leg to their success in these events. The 200 medley relay will be much tougher for them.

I can solve this problem…just get Reagan Smith

This swimulator is the coolest thing EVER!! THANK YOU!

NC STATE women are back and even with the swimulator pulling Ky-lee Perry’s 50 free as a 22.03 when it is actually 21.80 this season bodes even more points for them.