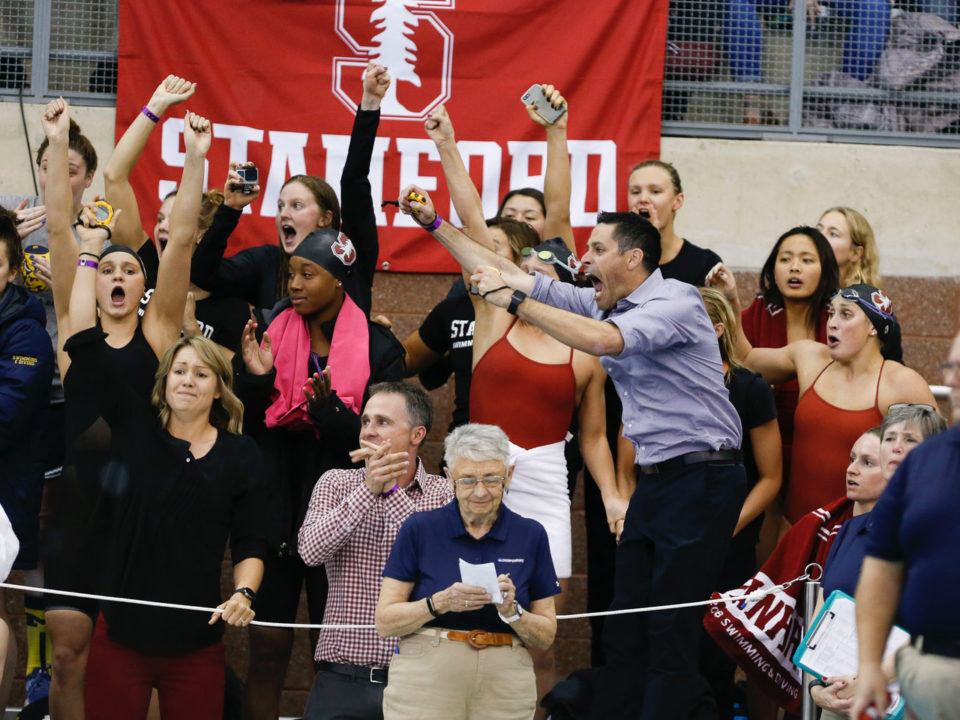 Stanford ran away with this meet. Their margin 220 point margin of victory over Cal was the 3rd largest ever. Current photo via Tim Binning/TheSwimPictures.com

Stanford ran away with this meet. Their margin 220 point margin of victory over Cal was the 3rd largest ever. Cal and Stanford are also set to dominate the meet again next year. Stanford have the most individual non senior points with 234. Cal have 185 eligible to return. Next is Michigan with 112 and Texas with 94.5. Stanford return the most points despite graduating 159 individual points, more than all but one team’s total returning points. The next highest scoring classes were Stanford’s sophomore’s with 130, Cal’s Juniors with 119, and Texas A&M’s seniors with 112.

If you want to see the event scores for day 2, and day 3 check out the previous summaries. The highest score in a single event was Texas A&M with 57 points in the 200 breast. Stanford put up the next two biggest numbers with 49 in the 1650 and 43 in the 200 fly.

Put another way, Stanford was so dominant and deep that they could have won the meet comfortably WITHOUT individual swims by Manuel, Ledecky, and Eastin.

Most of the non-stars more than pulled their weight, earning crucial points to help lift the team to this dominating victory. I wish they could be named individually because each one of them was very impressive too. As we saw, it’s one thing to be seeded coming into the meet, it’s another to actually perform, get a finals spot and score for your team.

Tennessee technically only DQ’ed one relay. They never got called for the 200 medley mishap.

That’s why it reads dq and “miss swim”.

I actually think it will be tough to win one.

Is the disparity between freshmen and the other 3 classes usually this dramatic (i.e. 3x more in other classes)? Seems big. Do we typically expect freshmen to improve after their first year? No offense, but are the other 3 classes all that much stronger than this newest cohort?

It does seem like a lot of swimmers underperform freshman year. Maybe it’s the big lights, or not being used to having to swim so fast in Prelims to make it back, or having to taper early to make the meet?

Be interesting to separate swimming and diving points when listing the FR-SOPH-JR-SR total points stats. A school with a lot of diving points can appear to have a superior collection of swimmers when, in fact, they don’t.

This may interest you: https://swimswam.com/2018-womens-ncaa-championships-individual-breakdown/