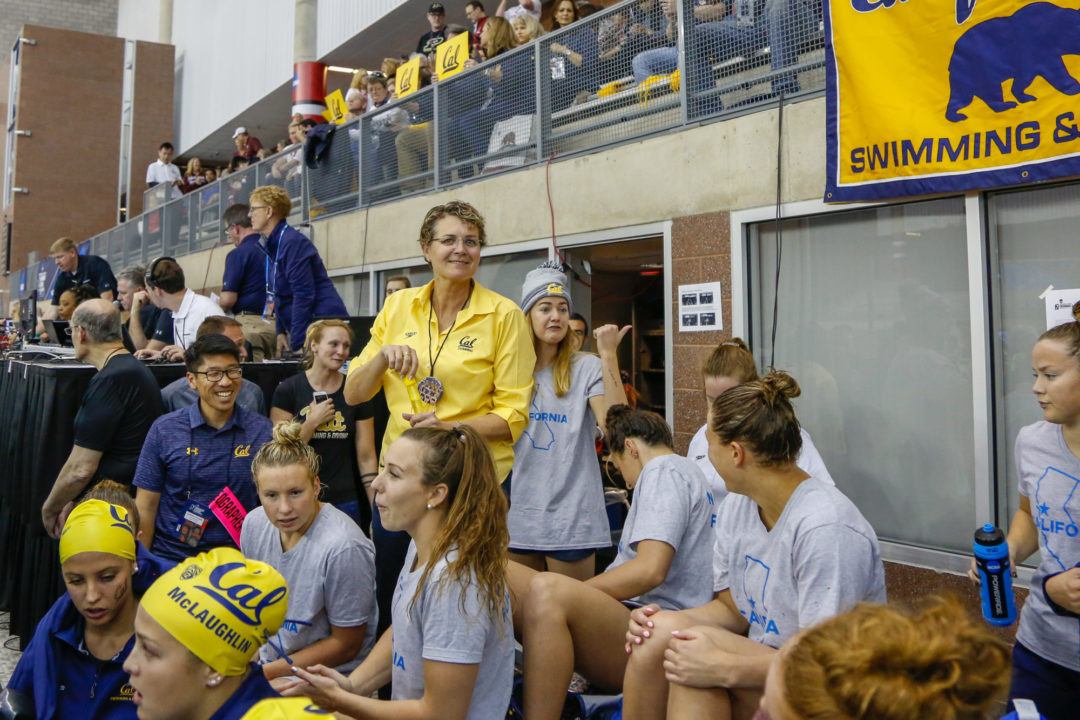 The 2018 women’s NCAA championships wrapped up a couple weekends ago with Stanford defending their title by a wide point margin over California. Current photo via Tim Binning/TheSwimPictures.com

The men’s version of this article was published yesterday evening. View it here.

The 2018 women’s NCAA championships wrapped up a couple weekends ago with Stanford defending their title by a wide point margin over California. Since we’ve already analyzed the scoring of this year’s meet to death, it’s time to start looking ahead to next year. The best metric for projecting a team’s success the next season without looking at recruiting classes is returning individual points.

Basic returning points numbers were already covered in my original scoring wrap up post, but those don’t paint a full picture. Some events like the 50 free where 7 seniors scored will look very different next year. Other events such as  the 200 IM where 4 seniors scored have the potential to look pretty similar next year. We can account for this by re scoring the meet with the seniors and Katie Ledecky (who is going pro) removed and seeing who has the most points (i.e. I re scored the results using only freshmen, sophomores, and juniors. People who will be back next year. Someone’s no-seniors points are what they scored in this hypothetical meet). This method ignores all of the new freshmen that will fill in some of the gaps next year, but freshmen score a smaller share of points at this meet than upperclassmen. Adding freshmen isn’t a direct replacement for subtracting seniors, so there is should be some merit to this methodology.

In the original post meet article, Stanford was listed with the most returning individual points with 234; however, we have since learned that Ledecky won’t be back, so their actual individual returning points total is 177, trailing Cal’s 185. In the re scored-without-seniors format Stanford (247 points) have a slight advantage over their Cal rivals (240). Texas jump from 94.5 real returning points to 159.5 no-senior returning points, 3rd most of any team. Complete data is in the tables below.

Texas picked up so many points because they had a lost of events that finished in the 5-20 range that benefit heavily from the removal of highly ranked seniors. A similar thing happened to Stanford, the team that benefited most from the removal of the seniors. Lauren Pitzer went from the 1 point she scored at this year’s meet to 15. Ally Szekely went from 3 points to 17. Each jumped from the fringe of the top 16 into the back 8 in several events

With Cal and Stanford returning such similar point totals , its worth asking who the favorite is next year.  It’s far too early to make any sort of definitive prediction about next year’s meet, but without Ledecky in the mix, there’s a chance we see at least a competitive meet between Stanford and Cal and possibly even a Cal victory. A pretty strong contrast to Stanford’s historic dominance this season.

Returning points aren’t everything. Plenty of other variables will affect the outcome of next year’s meet. There are factors that favor each team next year.

Favoring Stanford: recruiting. Cal has a solid incoming class with one top 10 recruit, but Stanford’s class is massive with 3 of the top 10 recruits. However, top recruits are no guarantee of success; scoring as a freshman at NCAA’s is hard. Plenty of top recruits don’t end up scoring huge NCAA points their freshmen years.

Favoring Cal: relays. Cal look like a potential relay powerhouse next year. They were top 3 in every relay this year and are only losing 2 of their 20 relay legs to graduation. They have three of the top 5 returning swimmers in the 50 free, Abbey Weitzeil (#2 returner), Amy Bilquist (#4), and Maddie Murphy (#5). Cal also have balance with the #2 returner in the 100 back, Kathleen Baker and the #3 returner in the 100 fly, Katie McLaughlin.

Stanford have some pretty big relay question marks next year. 12 of their 20 relay legs from this year are gone, and 3 of the 8 returning are from the 800 free relay. Stanford return 12 swimmers that participated in nationals this year, but 7 of them swam the 500. Most relays require sprinters. Only one returning swimmer, Lauren Green, swam the 50, and she was 47th. Stanford’s top returner in a 100 of stroke is Grace Zhao, the #10 returning 100 breast. This year breast was considered the weak leg on Stanford’s relays. Their top returner in the 100 free is probably IM and fly specialist Ella Eastin (47.1 relay split) over #22 returning 100 freestyler Lauren Pitzer. Their top ranked returning 100 fly is #27 Lauren Green (Eastin or Katie Drabot may also be helpful here). They aren’t returning anyone who swam the 100 back, though incoming freshman Taylor Ruck might help. With all those miss matched pieces, it’s hard to pick them over Cal in any sprint relay. It turns out having the Olympic champion in the 100 free on your team is helpful.

Will any of this prove decisive? I don’t know. It’s too early and there’s too much we don’t know about these teams yet. If you’d asked me to predict this year’s meet a year ago, I’d have said ‘Stanford by a lot.’ ‘I don’t know’ is way more fun.

Here are the complete returning points numbers for the top teams. Below that is a breakdown for every non senior at the meet. Update: I added returning relay legs

Don’t you or nobody else doubt Lady Vol powers especially when fueled with coon shin caps. It is sorta like magic. Haters gotta hate but if the freshman will be able to see that investing in team as Erika did this year gets the results she got then those freshman can have improvements just like Erika did..maybe even better!

I think that Stanford will not have any problem winning NCAAs next year even if Cal might win some of relays. Stanford is deeper than Cal. However, Cal will give them a run for their money and quite possibly Georgia might also as they look to have a good recruiting class. I can see Virginia being up there for the 2019-2020 season.

Now- could you do one with best times for all returnees and incoming freshmen?

At first glance the analysis suggests a highly competitive NCAA meet next year between Cal & Stanford for the win, until you realize that Stanford has an absurdly strong incoming freshman class.

“It turns out having the Olympic champion in the 100 free on your team is helpful.”

Also turns out that having a pair of hyper-versatile underwater dolphin kickers makes your medleys better.

Hu & Howe have to be two of the most underappreciated swimmers on Stanford’s roster, particularly on relays. I feel like those two were always overshadowed by Manuel or Ledecky putting up some massive splits, but the only reason they’re even in the hunt is because of reliable, versatile legs from Hu & Howe.

Much like we saw with Dressel and Florida, Stanford might have to leave Ruck off what in theory could be their best relay due to needing her to get them into finals in all the other relays.

With Howe and Hu now gone, they’ll need Ruck for the backstroke on the medley relays, and with Manuel gone along with Howe and Hu, they’ll really need her on the sprint relays. I think Stanford leaves Ruck off the 800 free relay. they’ve got plenty of options there

What about Lucy Nordman ?
She’s a pretty good backstroker and freestyler.