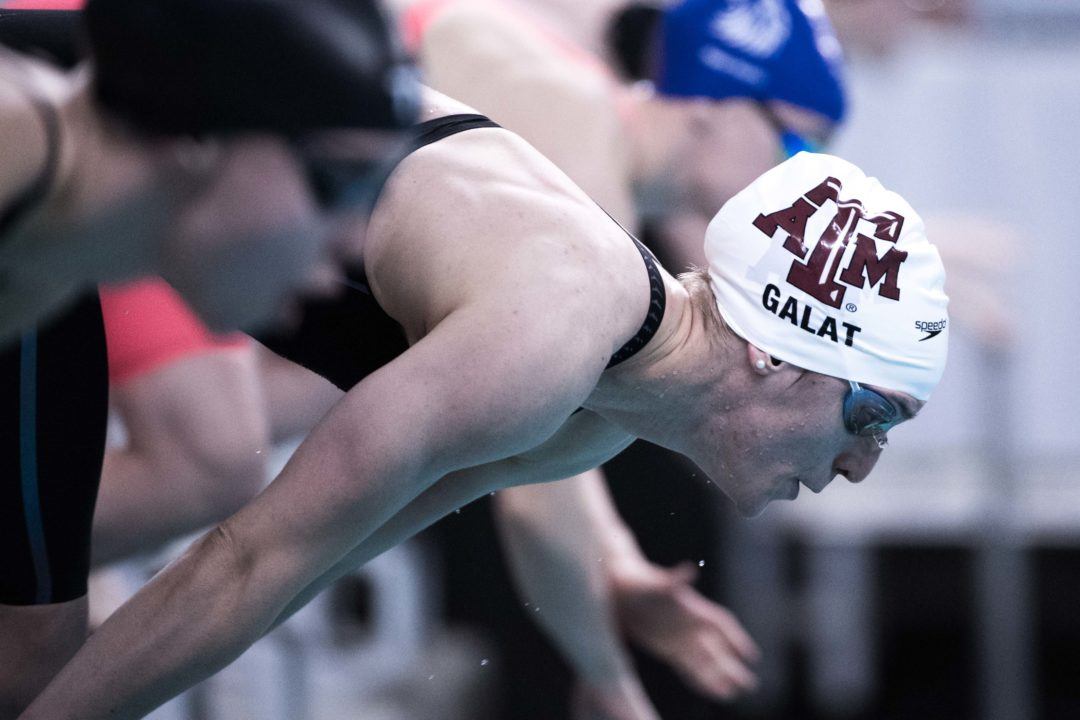 We’re now a ways out from women’s NCAA’s, but that doesn’t mean we have to stop breaking down the meet.... Current photo via Mike Lewis/Ola Vista Photography

We’re now a ways out from women’s NCAA’s, but that doesn’t mean we have to stop breaking down the meet. I’ve already looked at individual performance and team scoring in depth, so now it’s time to start looking at time performance.

The men’s version of this article was published Wednesday. View it here if you’re interested.

The change in the average this year does not appear to be explainable by a large number of outliers like the shift in the men’s data was. Instead there was a slight shift to the right in the overall time change distribution vs pre 2018 time changes:

I don’t know what the explanation for this slight shift is. I would love to hear some theories in the comments. Does it have to do with the timing of certain conference meets? The temperature of the pool? The meet schedule? Am I reaching here and seeing a trend were I should be seeing random noise (quite possibly)? Something else?

Nationals performance vs seed time is an interesting metric, but there are a lot of things it doesn’t tell us. It can’t tell us much about how much a team improved. To get a better idea, I compared nationals and season best times to swimmer’s best time in those events during previous year’s conference or national meets. Of teams with 20 or more swims at the meet Virginia dropped the most time from previous years based on their season best times (1.87% faster on average) and their nationals times (1.44% faster). If we look at teams with 10 or more swims, the best performing team by season best improvement was another ACC team North Carolina who dropped an average of 2.19%. The average season best for all swimmers at nationals was 1.1% faster than their previous season best time. Nationals time were on average .4% faster than swimmer’s previous season best times.

Of course, this a huge selection bias problem here. This improvement is not representative of sport wide improvement at all. Swimmers who got worse were less likely to qualify for the meet in the first place. To get a better idea of overall improvement, I’ll be doing an update to this post with nationals data included.

The biggest time add at the meet came from Heidi Vanderwel of Yale whoe added 4.9% to her 100 back (4.9%). However her season best time was better than her previous season best time in that event by .64%. This pattern repeats itself among the biggest time adds. The 43 largest time adds to seed at the meet all were either freshmen (and therefore didn’t have times from previous seasons) or beat their previous season’s best time, some by wide margins. People who appear on the biggest time adds list tend to be people who really nailed their first taper and couldn’t repeat it a second time. For example, Katie Coughlin of Wisconsin’s 200 back was 4.2% slower than seed, but her Big 10’s time in the event was 2.2% faster than her previous PR.  The top and bottom individual time changes are in the tables below the team time change data.

Negative is faster. Positive is slower. This data is from events swum at nationals only. A team’s season best vs their previous season collegiate best times is for entries at nationals only. Does not include events only contested at earlier meets.

This methodology misses transfer’s times at their old schools from previous seasons. However, I fixed Katie Coughlin‘s (an Alabama->Wisconsin transfer) times in the table below manually (she went to my high school, I made an exception).

Of note, Katie coughlin had some issues with her wedge on the start of that 200 back. Accounts for some of the gain