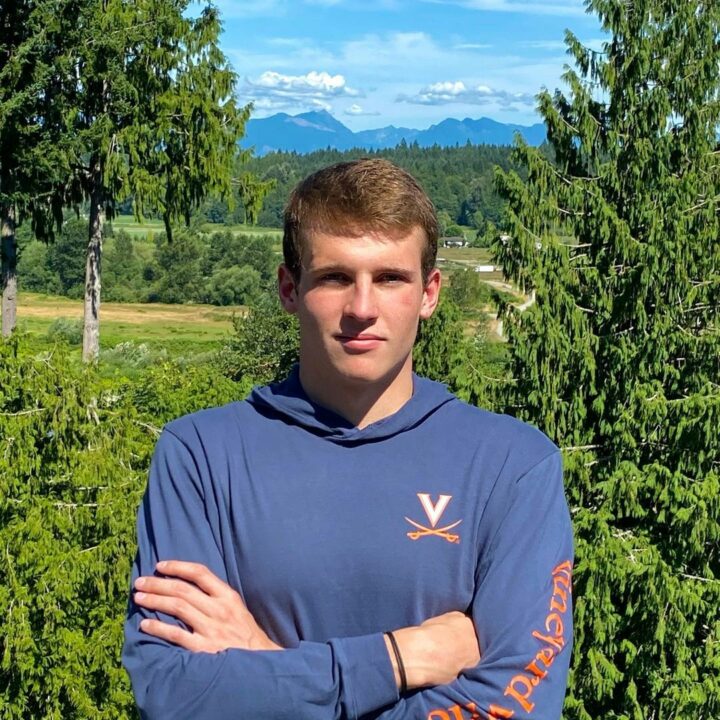 Matt King has announced that he will be transferring to the University of Virginia beginning in the 2021-2022 season. King entered the transfer portal after his freshman year at the University of Alabama. He has three remaining years of NCAA eligibility.

King’s times from the SEC champs would have earned him a silver and a gold medal at the ACC champs. He would have touched second behind Matt Brownstead of Virginia in the 50 free, and he would have won the conference title in the 100 free. Brownstead was also a freshman last season.

King will be swimming under the direction of head coach Todd DeSorbo who was recently named as one of the assistant coaches for the U.S. Olympic team in Tokyo.

He originally verbally committed to swim for Indiana, but changed his decision when Indiana assistant coach Coley Stickels was named as the head coach at Alabama. Stickels resigned mid-way through the 2020-2021 season after a year and a half in the position. It was announced that Margo Greer would take over. This would be her first paid coaching position. Colton Stogner, Andrew Shea, Lia Bell, Alec Dixon, and Nico Hernandez-Tome also entered the transfer portal.

For Virginia, a team that was 9th last season at the NCAA Championship meet, this is a huge step up the ladder in their quest to join the women’s program as NCAA Champions. Only 10 NCAA freshmen in history have been sub-19 seconds in the 50 yard free, and two of them are now Cavaliers. With Jack Aikins, the second-fastest sprinter in the high school class of 2021 at 19.68, joining the team this fall, the Cavaliers have a monstrous, and very young, sprint foundation returning to Charlottesville in the fall.

Tear it up Matt!

UVA is getting not only a great swimmer but a class act as well!

What’s the story there? Elaborate if you can.

He’s never mentioned among the Bama swimmers transferring but he left as well, and is headed to Texas. Great backstroker.

Chris O’Connor will be very good and should be mentioned. Alabama is in crisis mode at this point. I’m shocked more committed swimmers haven’t pulled out.
Everyone is still scratching their heads about the Margo hire. It makes no sense.

Seems like the AD there needs to be investigated. Obviously, there were many complaints lodged against the school during Stickels time there, and he looked the other way while our kids were made to be victims.

Imma come back to this when NC State wins the NCAA Championship in 2 years.

While it feels that way, you’ll note that not a single member of the UVA team is using a 5th year this coming season – and this is the freebie year, where they don’t count against the cap.

UVA culture is to graduate in 4 years. All 4th years are moving on with their lives rather than blocking younger swimmers from getting an opportunity to lead and take some of those last spots. Additionally, school isn’t free, so if they are ready to begin their careers, there is no need to pay more than $40K to get a Masters and have one more year of amateur swimming.

Paige Madden has not decided what her next step is – it may depend upon how the ISL works out – but she has been awarded Post-Graduate scholarship money when she is ready to continue her post-graduate education. She has made a permanent mark on UVA swimming, achieved goals well… Read more »

Would want to be a fly on the wall of Alabama swimmers DMs , after their AD hires a person who seems to be a great ambassador of the sport, with virtually no coaching experience

Curious how the AD relayed their decision

Wow. Big get for UVA