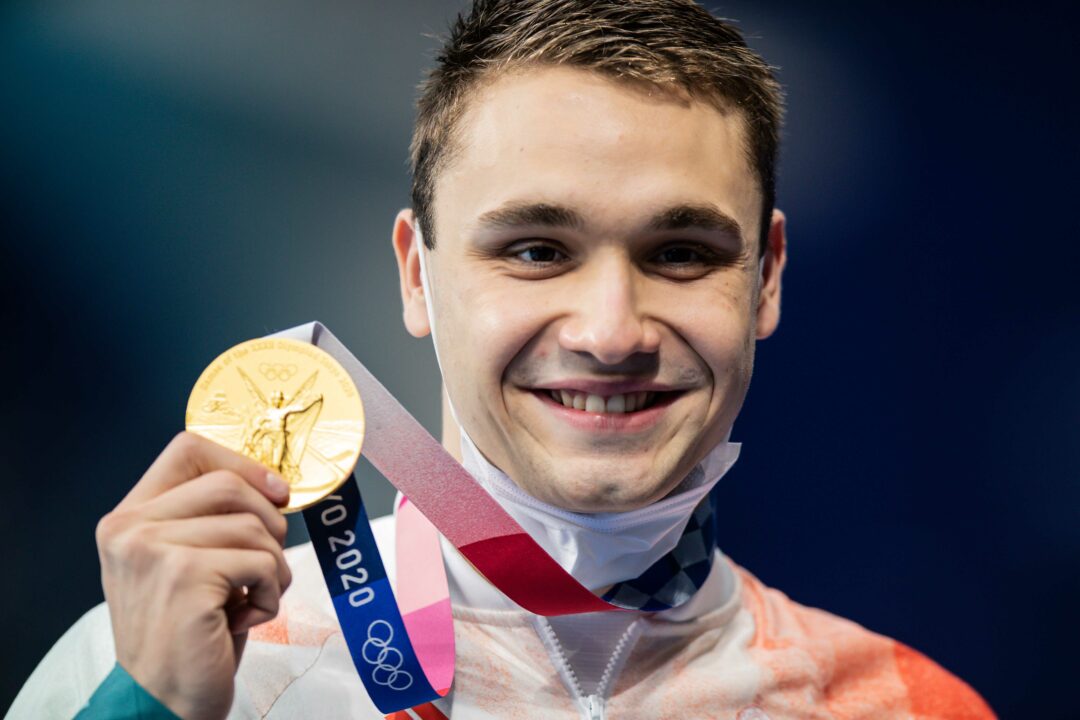 Kristof Milak, who clobbered Phelps’ WR, cannot be compared to anyone else but himself.See why Stefano Nurra thinks we still haven't seen his best 200 fly yet Current photo via Jack Spitser/Spitser Photography

Tokyo 2021 was a weird edition of the Olympic Games: the pandemic surely made it difficult for many Olympic athletes to train, travel, compete, recover, and all of the other things that Olympic athletes are supposed to do to be at their prime.

This is supported, in part, by the numbers of individual World Records as compared to prior Olympic editions.

The analysis of his performance is something absolutely fascinating.

Kristof Milak, the man who clobbered Michael Phelps’ world record, cannot be compared to anyone else but himself.

At the Olympics, he won the same race, setting an Olympic record time of 1’51”25. Well, it’s easy to think our hero was not in his best shape! The fact that the Olympic finals were in the morning may have affected the results, but let’s go a little bit deeper!

What I would like to highlight is the mechanical point of view of Milak’s performances.

This data might make every coach think he made some mistakes in his plan.

That could be: Milak improved a lot in his 100m fly and he worsened a bit in his 200m fly.

The main difference in time is therefore in the second 50m: 27.63 in Korea vs 26.03 in Japan. Moving a little bit deeper with our analysis we can see that Milak perfected his start and turn and he surely improved his swimming in the second 50m while he worsened a bit in the swimming part in the first 50m.

Now, let’s have a look at his stroke rate (SR) and stroke length (distance per stroke or SL): the differences are amazing.

From the World Champ 19 to the Olympics 21 Milak has reduced the stroke rate and he has increased a lot the stroke length which is getting more and more efficient.

Considering the first 50m the differences between Stroke Rate and Stroke Length recorded in Gwangju and those recorded in Tokyo are significant: 5 cycles per minute as a Stroke Rate and 20.1 cm as a Stroke Length. In the second 50m in Tokyo the SR is just a bit slower – 1.1 cycles per minute – than Gwangju, but the SL is 16 cm longer. (See the average difference in all 100m in the table).

Based on this data, it is reasonable to think that at the Olympics he was able to swim the second 50m 1.60 seconds faster than at the World Champ because in the first 50m he used less energy swimming the same time. Of course, this can be achieved only thanks to very hard training.

The improvement in the Stroke Length can be also related to the number of breaths: in Gwangju he breathed 17 times in the 100 fly, while in Japan only 9. This is a huge difference! It is another point that allows us to think that he increased the efficiency of his swimming reducing the energy cost: in fact, after the first 50m he was able to remarkably increase his speed as compared to the race in Korea.

Kristof Milak’s performance in the men’s 200m is undoubtedly his best performance.

In Tokyo this race took place on the fifth day of the Olympics and honestly, at the moment I did not expect anything more exciting. I was wrong, of course. Milak was about to swim his 100 m, three days later.

First of all, the table above shows that just the second 50m in Tokyo was slower than in Gwangju. This is a very important point to be considered.

In my last article about Milak (click here to read) I analyzed his world record and highlighted that the underwater speed was the weak point of his performance.

But all that glitters is not gold.

No doubt Milak has improved his start, but the turns, or better, the total time recorded from 5m before the wall to 15m after the wall is exactly the same.

That means that the underwater phase surely matters but also the breakout and the first meters have the same importance because the time at 15m does not improve.

In this case, we see also how important the approach to the wall is: it is a very technical phase, and the table shows some interesting differences.

The different colors make it easier to compare the phases and see the differences.

Based on these data it seems that Milak has worked hard on the underwater phase and his turn: these are very good preconditions, but he hasn’t finished the learning process yet. It will be interesting to see the results when he develops the new skills and puts all the pieces together.

Comparing the SR and the SL we can make other considerations.

We have already spoken about the second 50m where Milak lost the split compared with his World Record swim in Gwangju. In the second 50m, both the stroke rate and the stroke length lowered a little while in the first and third 50m the parameters didn’t change too much. It was in the last 50m that Milak was able to keep a more efficient swimming with a longer stroke length – 13 cm makes a huge difference! Another parameter that could affect the time of the second 50m is the number of breaths in the first 50m: 11 in Gwangju vs 8 in Japan. I am not sure that this is a great strategic choice, because in 200 fly, and above all in the first 50m, it is important to breathe in order to avoid spending too much energy at the beginning of the race.

The swimming time of the last 50m is 17.56 sec in Tokyo vs 17.90 sec in Gwangju: another significant difference!

As swimming is concerned the results are clear: 1’51”25 in Tokyo vs 1’50”73 in Gwangju. The second 50m is one of the main points of the performance. Based on the collected data I think – but this is just my opinion – that the second 50m are a misinterpretation of the swimmer. We witnessed a great improvement in the 100m fly, a perfect management of the underwater phases, and a very interesting upgrade of the efficiency in the last 50m. In my humble opinion, we are going to see a New World Record in 200m fly in the very near future. Preconditions are essential to achieve great results.

Thanks for doing this analysis. The other comments above are key also, about ripping his suit in particular.

16 events (including relays) had Olympic records broken, which is almost half of the events. If you include the individual number of times they were broken, Olympic records were broken 32 times. That’s not even including the fact that 3 teams simultaneously broke the womens 4×200 relay world record.

Also, I think we need to include the fact that Kaylee McKeown broke the world record at trials, and then only missed it by 0.02 in the final, which would have been a world record had she not just broken it.

As a milak fan I’m happy anyway to see his swimming analysis. He’s extremely silent about himself on social media by posting just once or twice a year on Instagram unlike any other Olympic/world champions which kinda makes him get ignored constantly by the swimming world (especially outside of Hungary) , so I am very glad that people bring him up and talk about his techniques.

Yeah people in comments are not wrong about the fact that the issues Milak had before the 200 fly final affected his performance and therefore its not the ideal case to compare with the 2019 WR breaking one. Same with the 100 fly race, I think it would have been better to compare with… Read more »

“which kinda makes him get ignored constantly by the swimming world”

LOL, hardly a swim fan the world over that wouldn’t take notice of an article or a race with the name Milak in it. Superstar of the highest order.

When MP swam that 1:52.03 & broke his WR by .06, that was the race where the goggles malfunctioned. Equipment does indeed affect performance. Maybe MP could have have done a high 1:50 that race?

he had 15 minutes to warm up, because he lost his badge, his swim suit, that probably trvmps all the in-depth analysis

This is literally my recurring nightmare.

I like the analysis and everything around it but… he ripped his swimsuit before the 200m butterfly, that alone is more significant than any other fact you listed above.

Imagine training 46-48 weeks a year, swimming 7 to 8k a session, training for a grueling event like the 200 fly, and yet you’re still 3-4 seconds slower than the world record holder.

Kristof Milak is a vo2 max machine and a very naturally aquatic human, who has an incredible feel of the water.

29
0
Reply
Str
Reply to  Hardwork is good, genetics are better

Such is sport, competitions are cruel. Kristof has a elongated fish/dolphin-like body built which ressembles a lot to that of Phelps with his long wingspan. He’s born to swim butterfly. Hopefully he gets better in other strokes too.