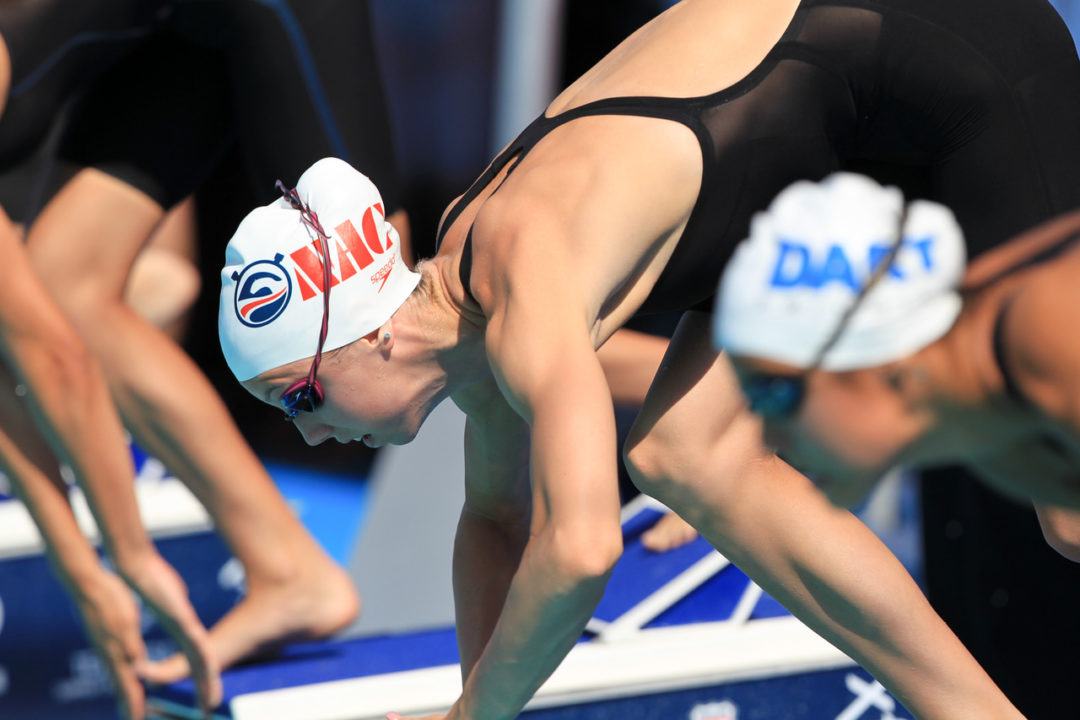 15-year-old Gretchen Walsh continues to impress, putting up the fastest time ever by an American 15-year-old in the 100 free. Current photo via Tim Binning/TheSwimPictures.com

15-year-old Gretchen Walsh continues to impress, putting up the fastest time ever by an American 15-year-old in the 100 meter free.

Walsh qualified 6th in prelims of Nationals this morning, going 54.38. That time stands up as the third-fastest ever in the 15-16 age group among Americans and is faster than any other American has been at age 15.

There’s a slight caveat on that: Missy Franklin was actually faster at age 14 (54.03), but only went 54.93 at age 15. Walsh now only trails Franklin and Olympic champ Simone Manuel in the all-time 15-16 ranks, per USA Swimming. That’s not bad company to keep.

With an A final spot tonight, Walsh should be all-but-guaranteed a spot at Junior Pan Pacs, though she could actually make senior Pan Pacs if she can move into the top 3 or 4. Currently a rising high school sophomore, Walsh could also be in the mix for a World Championships or Pan American Games spot tonight.

Is this in meters or yards?

Does anyone know how they train? Aerobic? Mix? USRPT (hope not) Obviously she is talented… but just wondering the x’s and o’s of her training cycle if anyone has an idea.

She looks very tall from the pictures. Does anyone know her current height? Maybe a bit like Franklin and Oleksiak who are also very tall and broke through very young.

That is 0.54 sec improvement of her personal best. She may challenge the 1:58 barrier in 200 tomorrow.
Walsh pushed Ledecky out of final today and Tuggle will do the same thing with Franklin. That’s what I would like to see from the new blood of American swimming.

Well Ledecky is 21 and Franklin is 23, they are still fairly young – why do you like to see them pushed out by “new blood”?

Good question. Just like it.
But if to put it seriously: is Ledecky able to swim under 54.4? With high probability the answer is “yes”. That may require from her to be better prepared for this race. She hasn’t done it I think, postponing her best form of the season for PP. Why did she swim this race then? Probably, hoping that her current form would be enough. Well, in such situation I would like leaders to be pushed to keep them awake that the challenge can come from any side. Is it a big deal of not swimming 400 relay at PP fo Ledecky? I don’t think so. Even better to have one trouble less. Is it an… Read more »

Yozhik is a Putin troll whose mission is to discredit USA Swimming.

You are simply jealous of how much I’m making by doing this dirty and disgusting job. But don’t worry. With such protectors and caretakers like you USA Swimming will survive.

@Samuel Wood HUNTINGTON: FYI. SWIMMERS’ AGE.
Today 99 girls were scheduled to swim 100 free prelim races at National Championships. One I believe hasn’t shown up. Of that 98 swimmers 8 was of age 23 and older.

Ledecky is not getting “pushed out” of anything. She’s unrested and swimming her 6th best event . . .

Yozhik does not acknowledge Ledecky’s recent world record in the women’s 1500 m freestyle.

Why are you hoping Missy gets pushed back to the B-final. I love Tuggle I really hope she makes the final and an international team of some sort, but just because you want the “new blood” to succeed doesn’t mean you should wish bad things on people like Missy. Obviously someone is going to get pushed out by Tuggle if she makes it, but why do you want it to be Missy?

Didn’t mean to offend you. We all have somebody who we worship and somebody who we dislike. It could be some reason for that, or could be no reason at all. Missy Franklin isn’t my favorite swimmer since she became pro. And, please, don’t start the discussion why I’m terribly wrong with that. But there are plenty of people who want to hear or to read nice things about her and, swimswam provides plenty of such opportunities. If there are a few people who doesn’t share your admiration, please, don’t overreact with their postings. Read what pleases you.

good grief, this is becoming too much

Last warning, before everyone gets put on the moderation list. I know you don’t want that.

Any hints on avoiding the automated filter? I seem to hit it every time.

What a Talent she is !!!! Usa has no worries for its sprint future …..

To make predictions for the 15 years old is the last thing I would do. Look at the list of best swimmers shown in this article. Only Simone Manuel has progressed to the world class level. Franklin has improved by less than 0.3sec. And Neal with Bilquist are not a factor in major competitions.

Lia Neal is a two time Olympian? How is that not a major factor?

I’m talking about personal bests. Sorry, if it wasn’t clear. I don’t tell that such and such girl from this list is a bad swimmer. I’m telling that expectations of possible progress can be over optimistic if they are based on the exceptional results shown at the age of 15.

You have zero credibility when it comes to personal bests.

You are getting repeating yourself. Something like Chinese spy pretending to be Putin’s secret agent would be more impressive and entertaining.

Lia Neal’s personal best now is almost 1.5 seconds faster than that. You cannot tell me that isn’t progression.

You are losing the point of discussion. My original comment (forget about teasing of BAKER-KING-WORRELL-MANUEL) was a response to ERVINFORTHEWIN who wrote ” Usa has no worries for its sprint future …”. If Walsh improves by 1 sec swimming at the top of her career 53.3 will you agree with ERVINFORTHEWIN’s statement? She has to improve by almost two seconds to fulfill this hope. What makes you sure she will? Just because she is 15 now?

Well, aren’t you a little ray of sunshine, YOZHIK.

The correct term is troll.

Dear BECKY D, whenever you have personal questions about me ask them direcktly BAKER-KING-WORRELL-MANUEL. She knows everything about me. I guarantee you will be more than satisfied. You have so much in common. Good luck.

I responded to Becky D. Stay out of my conversations.

All you ever do is talk about junior female freestylers…and now he can’t make a prediction?

Everybody can make a prediction. It’s not a big deal. The question is how accurate it is.
If the picture of Gretchen Walsh in this article is the most recent one, then I can predict that she will definitely gain some weight. Will it help her in swimming or vice versa I can’t predict. Sorry for disappointing you.

This is the same individual who was gleefully predicting the demise of one Katie Ledecky!

I never make long term prediction especially when intense physical development is in process. Short term extrapolation is a pretty much accurate approach.

fairly certain thats the trials pool – so when she was 13.

53 tonight Gretchen come on you got this!!

Top four would be awesome!