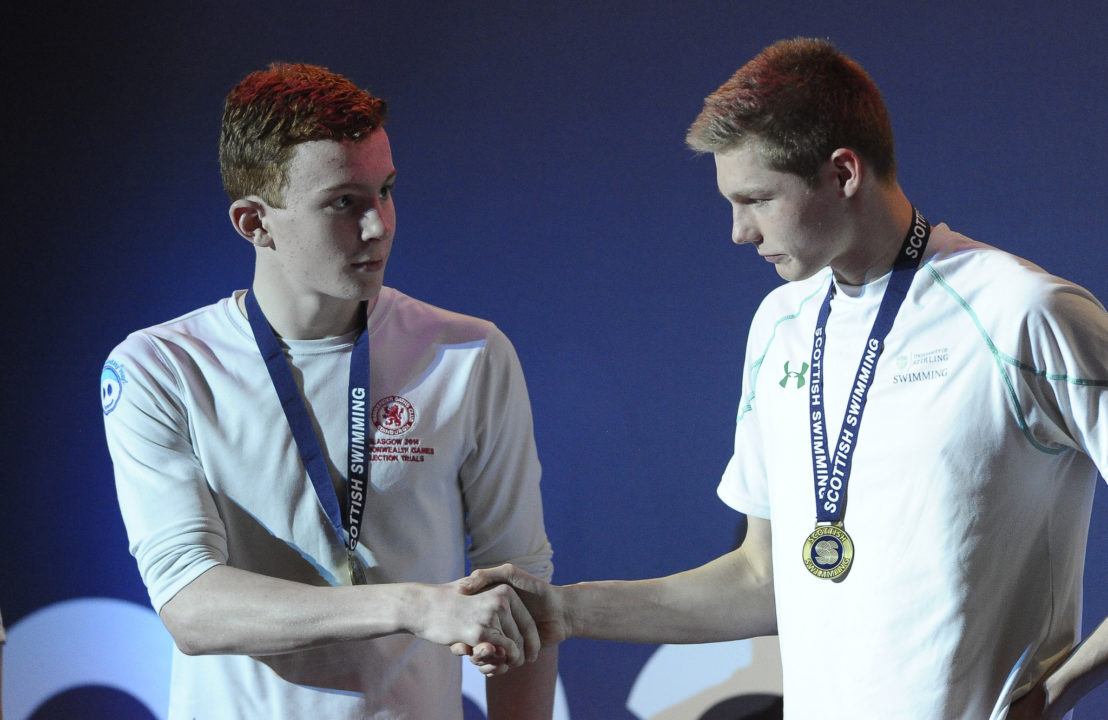 Two additional breaststroke age group records were broken as the British Summer Championships continue in Sheffield this week. Archie Goodburn, left, was one of the gold medalists this evening in Sheffield. Archive photo via Scottish Swimming

Yesterday’s 100m breaststroke pacesetters were back in action at Ponds Forge on day 2 of the British Summer Championships, contesting the 50m sprint. Two additional British national age group records fell when all was said and done, one of them by Dartmoor Darts swimmer Cameron Williams.

Williams had already turned heads last night in the 100m, clocking a new age record for 14-year-olds of 1:05.06. In the 50m breast today, the teen first threw down a mighty 30.27 in the morning to shave .01 off of the old age record, but then lowered it even further to 29.73 in the finals. That sub-30 outing represents Williams’ first time under the monumental threshold and proved fast enough to take gold in his age group.

The 17-year-olds’ race was won by Archie Goodburn who notched a new age group record of his own. He established himself as the top seed in the morning with a quick 28.24, then replaced that effort with an ever swifter 28.04 in the evening for gold. The Warrender Baths athlete now takes over David Murphy’s old spot on the record books.

Craig Benson of the University of Stirling and Katie Matts of Stockport Metro were also both back on top of the podium after wins yesterday evening. Benson doubled up on his 59.45 100m breast lifetime best with a solid 27.33 to take the men’s open 50m breast. Matts won the women’s 50m breast last night and followed that up with a productive 2:25.06 in the 200m breast for gold.

On the multi-class front, para swimmer Eleanor Robinson rocked a new World Record in the women’s S6 50m fly. Robinson notched a winning mark of 35.22 to earn a whopping 1022 points in the event tonight.

I think that one still belongs to Matthew Johnson.

Matt Johnson is still the fastest 15yo ever – But, he turned 16 soon after, and I believe for the purpose of records in Britain one has to be 15 on the 31st of December. As Matt Johnson would have been 16 on December 31st, I am not sure it counts as the record for the 15yr age group. British swimming could be clearer about this though!

Much as racing at British Championships is now age at 31 December, age group records have remained age on day of swim. Thus a swimmer can break a record for swimmers aged 15 whilst swimming in the 16 year age group if their birthday is towards the end of the year.

Privacy laws in GBR make the open publication of dates of birth problematic if not impossible so it is very difficult to work out how old a swimmer actually is on the day.