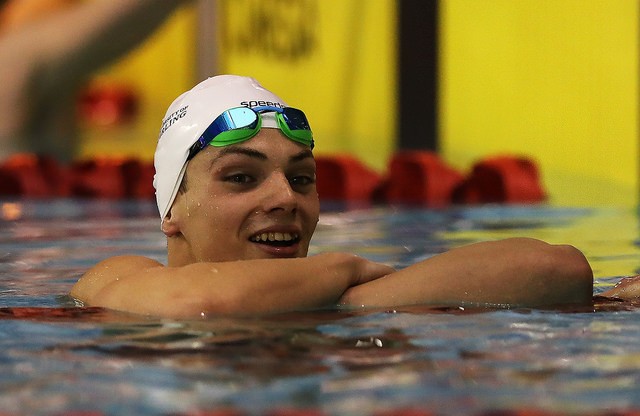 While the top-tier of British talent is preparing for the European Championships kicking off just over a week from now, emerging athletes and veteran racers are competing at the British Summer Championships in Sheffield this week. The meet represents the final championship meet for both open and age group swimmers, evidenced by the best times already thrown down on day 1 of the competition at Ponds Forge.

Dartmoor Darts swimmer Cameron Williams was one such athlete, as the 14-year-old crushed a new British national age group record in the men’s 100m breaststroke. Williams earned the top seed of the morning heats with a super quick 1:05.06, his own personal best. That time surpassed the previous British age group record for 14-year-olds of 1:05.42 held by two-time Olympian Craig Benson.

Although Williams was a touch slower in the evening, he still topped the podium for his age group race with another impressive outing of 1:05.37, still under the old record. For comparison, Williams’ new British NAG would check-in as the 7th fastest on the Americans’ all-time 13-14 year-old boys’ list.

The previous record holder Benson was also in action tonight in the men’s 19+ edition of the 100m breaststroke where the University of Stirling athlete fired off a new personal best. Heading into this meet, the 24-year-old’s career fastest sat at the 59.63 he registered at last year’s British National Championships.

After taking the top seed of the morning in 59.94, Benson wowed the crowd with a new PB of 59.50 to frog-hop over Daniel Sliwinski and become Britain’s 4th fastest performer ever in the 100m breast. Only world record holder Adam Peaty and Commonwealth Games medalists Ross Murdoch and James Wilby have been faster.

In the current world rankings, Benson now slides into the 13th slot:

Stockport Metro’s Elizabeth Harris rocked a new personal best in the women’s 200m freestyle in the 17/18 age group. The 18-year-old delved into sub-2 minute territory for the first time in her young career, clocking 1:59.95. Her outing now places her among the top 15 British 18-year-olds of all-time.

Martyn Walton very encouraging in the 50bk – That was a PB by almost a second. His background is not really sprint orientated (1.49/3.55 freestyler; 2.02 IMer) but he swam the 100s at SwimCup and looked good. Should go 54. this week and could well be the darkhorse pick as the backstroker Britain desperately need.

If Butler had done that time at Euro juniors he would’ve won. Must’ve not quite hit his taper right.

Walton’s been much more of a sprinter the last couple of years than he was as a junior. Could have PBs in multiple events this week if he follows on from that 50.

Yeah, I noticed he swam some big 100 PBs at the swim cup earlier this year.

Did he not go 49.6 at Euro Games 2015 in a relay? Shown glimpses over the years now maybe found an event he can make his own at Stirling. Super talented group of athletes there, wouldn’t surprise me if he continues to progress. He was a good backstroke swimmer as an Age + Youth swimmer.

Does anyone know the status of Walker-Hebborn? Still competing? Done?

Still swimming; Fastest Brit this year – But I suspect selectors are putting their eggs jn the younget basket and hoping to find someone for 2020. Positives signs with a bunch of youngsters blocking in the 54s right now. You’d hope one in a group of four or five would progress into that lower/mid 53s territory.

That would make Craig Benson 9th ranked European this year and 3rd British in 100 BR. Does Euros have a 2 athlete limit?