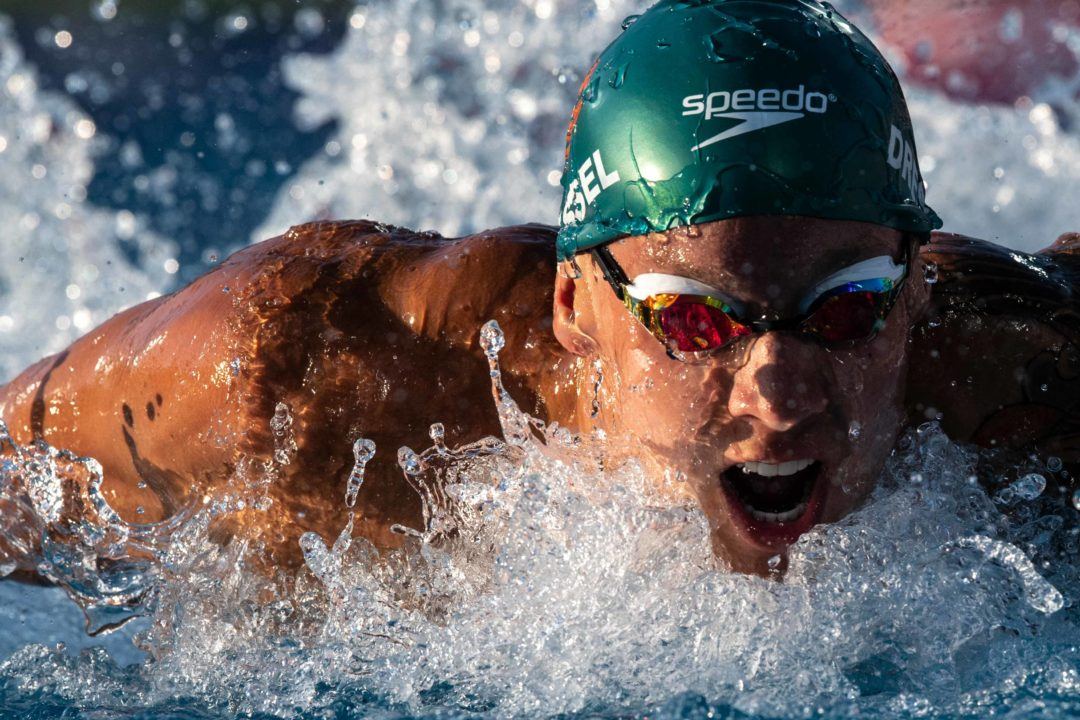 Caeleb Dressel is set to compete in his first long course meet since Pan Pacs, and will look to redeem himself against the fast-rising and newfound sprint rival Michael Andrew. Archive photo via Mike Lewis/Ola Vista Photography

The second stop of the 2019 TYR Pro Swim Series will begin tonight at the Wellmark YMCA in Des Moines, Iowa. This is the first time the meet has been held in Des Moines, which is one of the many new additions to the PSS stops for this season. You can read more about the revamping of the schedule here.

Beginning at 6pm EST, the meet will kick off with the timed finals of the women’s and men’s 1500m freestyle.

Prize money will be awarded to the first, second and third place finishers in the championship final of each event at all five stops of the TYR Pro Swim Series. The amount awarded scales as follows (in USD):

Furthermore, the male and female athlete with the highest scoring preliminary swim – based on FINA power points, and only in an Olympic event – will each be awarded $1500.

At the conclusion of the 2019 Pro Swim Series, the male and female athlete that swam the highest scoring swim in an Olympic event (again, based on FINA power points) at any stop of the PSS will win a one-year lease for a BMW, as well as a stipend from USA Swimming to cover additional charges and taxes on the vehicle.

The first stop of the Pro Swim Series, which was in Knoxville, showcased a significant drop in attendance compared to last year’s average; likely due to the fact that the cuts for Knoxville were the fastest in PSS history. In response, the time standards for the Des Moines stop were made substantially slower. Interestingly, this has resulted in a sharp decrease in entries on the women’s side, with mixed results on the men’s side.

Despite the low turnout, an abundance of elite swimmers – representing a wide variety of countries – will be competing in Des Moines. So, without further adieu, here are four storylines to watch for throughout this star-studded event:

Michael Andrew, the notorious age group stud, firmly established himself as a viable international competitor last summer at U.S. Nationals by qualifying for his first major international team, as well as upsetting Caeleb Dressel in both the 50 free and 50 fly in the process.

There’s no telling, of course, how rested either one will be at this meet, but perhaps we will get a taste of what’s to come later in the summer. Of note, this will be the first long course meet since Pan Pacs that Dressel has competed in.

World record-holder Kathleen Baker is entered as the first seed in the 50, 100 and 200 backstrokes, as well as the 200 IM. At the Knoxville stop of the Pro Swim Series, which was the first stop in the series, Baker finished third in the 50 back and 8th in the 100 back, and didn’t even swim the 200 back.

Notwithstanding the question of her current form heading into the meet – which realistically has no broader implication on her success come summertime – Baker will likely face several challenges in the backstrokes. Olympic teammate Olivia Smoliga is the forerunner to threaten Baker; she is also entered to swim the backstroke triple, as well as the 50/100 freestyles. Team Elite’s Ali DeLoof should also contest the shorter backstrokes.

Long-time Pro Swim Series staple Chase Kalisz – who is the defending World Champion in both of the IMs – has yet to swim a 400 IM during the 2019 season, and will again refrain from competing in the event at this meet. Instead, the 400 IM will be highlighted by Kalisz’s fellow Georgia and Rio Olympic teammates Jay Litherland and Gunnar Bentz.

A strong cohort of Canadian women look to make a dominant showing across a wide range of events. Olympic Gold Medalist Penny Oleksiak is the top seed in the the 100 free – she’ll be rivaled by American veterans Margo Geer and Lia Neal, and possibly by her fellow country-mate 17-year old Kayla Sanchez.

Additionally, Oleksiak is slated to face off with America’s predominant flyer Kelsi Dahlia in the 50 and 100 butterfly events, both of which feature Dahlia as the top seed.

Canada is very well represented in the 400 IM, with 19 year old Mary-Sophie Harvey coming in as the top seed, followed by Vancouver’s Erika Seltenreich-Hodgson and Emily Overholt who occupy the third and fourth seeds. Ontario’s Kierra Smith is seeded third in the 50/100/200 breaststrokes, and will look to overtake Americans Micah Sumrall and Bethany Galat.