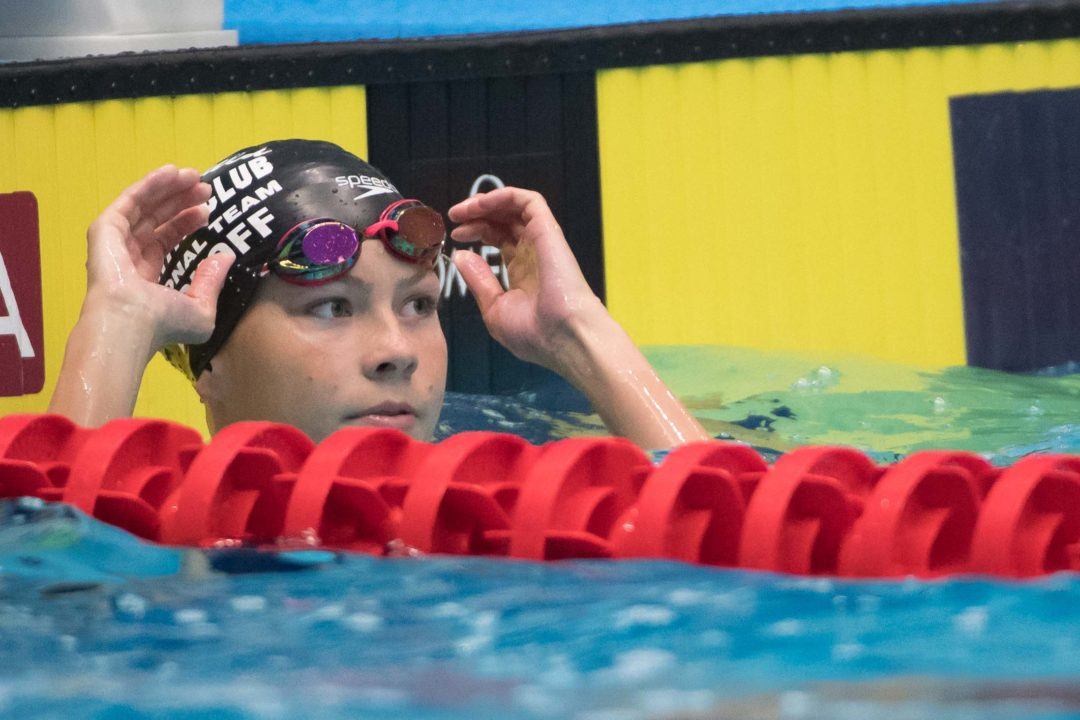 After breaking the meet record in prelims of the 100 back, Katharine Berkoff will look to pick up her first major international gold tonight. Archive photo via Mike Lewis/Ola Vista Photography

As Rihanna’s Only Girl (In The World) booms within the Napoli Natatorium for the umpteenth time, all can rest assured that the fourth session of the 2019 World University Games are set to begin. The competition will start with the finals of the women’s 1500m free, and subsequently followed by three sets of semi-finals and six additional medal deciding races.

Japan’s Waka Kobori occupies the top seed heading into the first race of the evening and is the youngest competitor in the field. She earned a top eight finish in this event at the 2018 Pan Pacific Championships – her first major international competition – and is likely looking to go nowhere but up as she continues to develop her elite profile.

The US’s IM figurehead in Ella Eastin will look to earn her first medal of the competition during the finals of the 200 IM. She moved through the semi-finals in third behind Great Britain’s Alicia Wilson and Abbie Wood.

Kirill Prigoda of Russia and Washington native Daniel Roy are seeded 1-2 for the finals of the men’s 200 breast with a pair of 2:09’s – the only competitors to dip below 2:11 in the heats. Look out for a close race between these two.

Soon-to-be NC State freshman Katharine Berkoff is another must-watch after breaking the meet record in the prelims of the 100 back with a 59.57, earning a new lifetime best. That time cracked the top 10 in the world this year; she’ll need to drop three-tenths to manage her way into the top eight, which would also be around the time that earned a US Olympic bid in this event back in 2016.

Waka Kobori was out fast in the first third of the race, but Moesha Johnson inched her way ahead at the 500, and the two put a great deal of distance from the rest of the field. Around the 1000 mark, however, Kobori started to pull away, holding the lead all the way into the finish in a time of 16:16.33.

At the time that Johnson fell off, it looked as if Ohio State’s Molly Kowal was starting to make a push for third, but she was pretty far behind. In the end, Kowal indeed closed the distance; almost running down Johnson in the end, but ultimately settling for third with a solid 16:20.94. Johnson claimed the runner-up with a 16:20.00.

Stanford’s Ella Eastin made a huge push for first on the backstroke leg, getting ahead of Great Britain’s Alicia Wilson at the 100 mark. Although she fell behind Wilson during the breaststroke portion, Eastin had a lead coming off the wall going into the final 50, thanks to a brilliant underwater.

Despite her lead, however, Wilson dominated Eastin in the last 50, crashing to the wall in a final time of 2:11.35 to take the win by almost a full second. Eastin, sporting an uncharacteristically slow free leg, faded to second with a 2:12.24, holding off a charging Runa Imai of Japan by the slimmest of margins. Imai claimed the bronze in 2:12.25.

The first of two semi-final heats saw Brazilians Felipe De Souza and Marco Ferreira solidly claim the first and second spots with times of 48.82 and 49.10, respectively. De Souza’s time would go on to be good enough to seed him first going into tomorrow night’s finals – Americans Zach Apple and Tate Jackson also went 1-2 in the final semi-final heat, stopping the clock at 48.84 and 49.05. Apple and Jackson were actually behind the field at the turn, eventually blasting their way to the front with impressive back-halves.

50 fly specialist Ai Soma of Japan took it out quick in the first of two semi-final heats, turning at the wall well ahead of University of Georgia’s Dakota Luther. Luther had a monster back-half, however, and took home first in the heat  with a 59.02 – despite an awkward finish – narrowly ahead of Soma’s 59.o7.

In the second heat, South Africa’s Taylor Lovemore had a dominant showing, becoming the only woman to dip below the 59 second mark in the semis along with Lisa Hoepink of Germany. The two finished 1-2 in the semi, and will enter the finals session as the first and second seeds as well.

Texas A&M’s Jonathan Tybur took it out blistering fast, touching the wall at the first 100 well ahead of Andrew Wilson‘s former meet record pace. With a huge pull-out, however, Russia’s Kirill Prigoda instantly got back into the lead going into the second half of the race. Stanford’s Daniel Roy‘s pullouts weren’t nearly on par with Prigoda’s, but the soon-to-be sophomore caught up to the leader as the two touched virtually simultaneously at the 150 mark.

In the end, Prigoda eventually pulled away, and his Russian teammate in Ilia Khomenko had an impressive surge of a last 50 to overtake Roy under the flags. The fellow countrymen finished with times of 2:08.88 and 2:09.42, while Roy settled for bronze with his 2:09.63 – a solid time nonetheless. Tybur, Roy’s teammate, ultimately faded to eighth.

NC State’s Elise Haan was out ahead of her teammate and the newly-minted meet record holder Katharine Berkoff, and looked solid heading through the turn. Berkoff had a massive underwater, however, that propelled herself to the lead merely after surfacing.

Berkoff never looked back after the turn, eventually crashing into the wall in another personal best time of 59.29, lowering the meet record down from her 59.57 from the preliminary heats. Haan also recorded a lifetime best of 59.62 for the runner-up spot, completing the American 1-2. The Napoli crowd roared for Silvia Scalia, the Italian national that finished third with a 1:00.43 final time.

Russia’s Aleksandr Kudsahev had a gutsy swim, bearing the burden of leading the 200 fly through the majority of the race. He was solidly ahead through the middle half of the race, but the Japanese duo of Nao Horomura – the meet record holder – and Takumi Terada began to close on the final 50.

In the end, Kudashev held them off for the win, notching a final time of 1:55.63. Horomura and Terada picked up the silver and bronze just behind Kudashev, registering times of 1:55.94 and 1:55.99, respectively.

South Africa native Tatjana Schoenmaker, the winner of the 100 breast at these championships, had a dominant showing in the final 50 to pull away from the entirety of the field. She posted a 2:23.89 in the first semifinal, going 1-2 with her teammate Kaylene Corbett.

After narrowly missing the meet record this morning, Emily Escobedo looked cool, calm and collected in the second semi-final, easily taking the win with a time of 2:24.36. In the same heat, defending champion in this event Kanako Watanabe of Japan settled for third, narrowly squeezing into tomorrow night’s final with her 2:26.22.

After trading meet records last night – with Ress lowering the record in the first heat and Waddell firing back with a record of his own in the next – the intense 50 back rivalry ended in possibly the most climactic way: a tie. Ress appeared to have the better start, but Waddell was closing fast. If it wasn’t thanks to an impressive lunge to the wall from Ress, it appeared that Waddell would have taken it.

Former Lousiville swimmer Grigory Tarasevich, a Russian national who already won the 100 back at these championships, picked up third place in this event with his 24.94 final time.

The USA quartet consisting of Kaersten Meitz, Paige Madden, Claire Rasmus and Gabby DeLoof dominated the women’s 800 free relay final, finishing almost six seconds ahead of the field in a final time of 7:53.90, just under a tenth off the meet record.

Fueled by the cheers of the stadium, Italy pulled away of a nagging Russian squad on the final leg, ultimately placing second with a time of 7:59.68, the last team under 8:00. Russia settled for bronze with their team’s combined effort of 8:03.85.

Same thing happened at ncaas?!? So she wasn’t tapered there either?!?

she saving herself for the World’s.

She should have turned down the WUGs slot and let someone who would give it all!

It was too late for that…….. The WUGs roster was finalized first
And she did a great job representing her country and gave it her all. Congrats on your silver, Ella but sorry you don’t please Superfan.

Then she was way into her taper and this 32.9 coming home is where she is right now.

What are you talking about? I’m sure she hasn’t even started tapering yet…
After this she’ll fly off to Singapore and taper for worlds with Greg…

Then she shouldn’t have take the spot!

Apparently, Superfan was the alternate on the WUGS 200 IM roster for women.

she was chosen to go there , so she did untapered – Not a Big deal to understand and accept ,

Not in LCM, and not post-NCAAs crush ’em to catch up in training, then taper like crazy.

Don’t need YouTube… you can watch for free at FISU.TV

Odd strategy from the Americans in the 100 free.

Both Zapple and Tate seemed to cruise the first 50 and then sprint the last 50. All about getting a lane for the finals and focusing on the master plan. They’ll both be close to or break 48 tomorrow. Hard to be top 16 in the world when the US seems to have an unlimited number of guys who can break 48.

Zapple is in danger of not making the national team. His relay lead off won’t count for APA funding for national team spot. And at worlds he doesn’t have an individual swim. Maybe we’ll see him at nationals afterall

Uh, it was semis. Chill

And? It still wont count