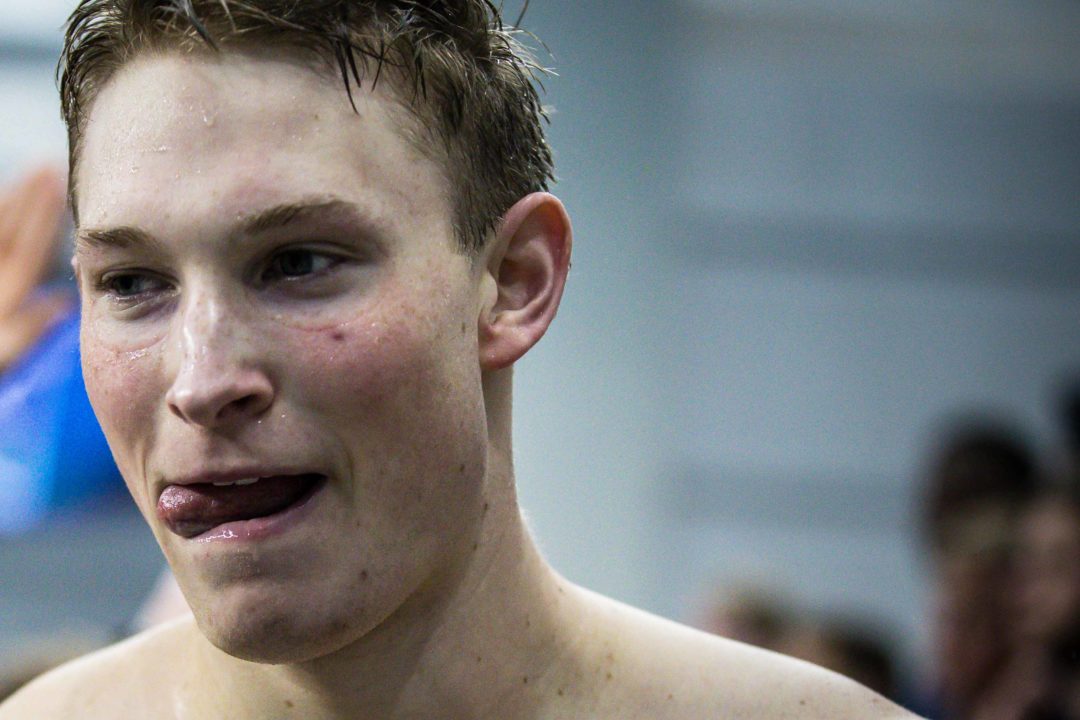 Coming off of a monster NCAA season, Dean Farris was relatively unproven in LCM. His 47.0 relay split at WUGs has changed the conversation. Archive photo via Jack Spitser/Spitser Photography

This morning, we delved into the 2015 World University Games (WUGs) results. Ten American swimmers surfaced from that WUGs roster who would go on to make the 2016 Olympic team. Of those ten swimmers, five raced to Olympic medals, and three of those five earned medals individually. The most impressive 2015 to 2016 transformation from the WUGs roster to the Olympics was that of Lilly King, who went from silver at 2015 WUGs in the 100 breast to Olympic Champion in meet record-fashion one summer later.

With 2019 WUGs wrapped up, we don’t have the 2020 OTs and Olympics data to compare to the last cycle, because those meets haven’t happened yet! So we’ll do our best to analyze 2019 WUGs results from the American team, select some of the more likely swimmers to make Tokyo 2020, and predict who might make the jump (and how it might compare to the 2015 -> 2016 transition).

Gabby Deloof really earned the MVP title here, finishing with individual gold medals in the 100 and 200 free and being the go-to relay leg on all three gold medal-winning American relays. While she didn’t hit bests in the 100 or 200 free, she raced well, and she’s still a relay swimmer at the 2019 Worlds coming up– we’ll see how she fares in Gwangju. Right now, though, Deloof looks like one of the strongest candidates for the 2020 Tokyo team out of this bunch, especially in that her best events are also free relay events which will take up to the top six swimmers.

The other very likely Olympic team candidate swimming at WUGs this time around is Ella Eastin. She didn’t have the best meet of her life in Naples, but, like Deloof, she’ll get another go at some swimming at Worlds. For Eastin, it’ll be the 200 IM in Gwangju, an event that Kathleen Baker scratched out of due to injury. After a string of unfortunate circumstances kept her from major international rosters, Eastin powered through mononucleosis to qualify for Pan Pacs and WUGs in the 200 IM.

But it may be the 400 IM in which she has the best shot at the team next summer– she was 2nd, after all, at 2017 Worlds Trials before getting DQ’d in a devastating call. The event has had no clear American duo (or even one standalone swimmer) for a few years when it comes to the big pool (remember Eastin’s 3:54 from 2018 NCAAs?), leaving the door open. It wouldn’t be surprising if Eastin made the 200 IM, but that event’s a bit more crowded.

The women’s roster in Naples wasn’t quite as strong as the men’s when considering 2020 Trials readiness, but it did have youth (read: potential). At WUGs, we saw incoming NC State freshman Katharine Berkoff win the 100 back with a lifetime best 59.29 and rising UGA sophomore Dakota Luther hit a lifetime best in her 200 fly gold medal win (2:07.92). NC State’s Makayla Sargent and Purdue alum Kaersten Meitz had excellent meets, Emily Escobedo continues to progress in the 200 breast (most notably her 2:22 from prelims), and Lisa Bratton hit another best in the 200 back en route to gold (2:07.91).

The biggest takeaway from the men’s side might be the freestyle depth that the American men have. Zach Apple, who will also swim the free relays at Worlds, took golds in the 100 and 200 free and had big legs on all three American gold medal-winning relays.

With Caeleb Dressel expected to lead the charge, there’s a bevy of sprinters with 47-second relay potential to load up the 4×100 free relay. In the 4×200 free relay, Julian has added his name to a host of swimmers with 1:46-or-better split potential.

Sean Grieshop continues to be at the top of the American scene in the 400 IM (with some potential in mid-distance free), while Justin Ress is a dark horse to snag a spot in the 100 back after his 53.31 leading off USA’s 4×100 medley relay.

THE LOOK-AHEAD TO TOKYO

Below, we’ve compiled a non-exhaustive list of swimmers from 2019 WUGs with strong potential for making the 2020 Olympic team.

‘Strong contender’ is someone who has a strong shot at an Olympic berth (individual or free relay), while ‘contender’ means they are likely to make the OTs final and could push for the top two (or top six for a free relay), but there might two or more (or six or more) swimmers who feel pretty solidly ahead of them nonetheless.

If there’s anyone we missed from WUGs who looks really solid going into next summer, let us know in the comments!

Ky-Lee Perry 50 Free Gold for USA, seems she would be a contender?

Looks like Gabby Deloof will have much better chance to make team than her sister Ali. Swimming freestyle helps since they take 6.

Justin Ress needs to be Contender. Murphy and Grevers are solidly ahead of him.

I’d definitely agree with that. A full second behind doesn’t sound too promising with one year out. He’s good don’t get me wrong, but he’s not a strong contender.

Zach Apple will be on the 2020 Olympic team, barring injury or illness. He’s got the times already to at least be on the relays.

Maybe, but she would definitely need to drop some time. She has got the talent for it though, her sc 200 fly is exceptional

I think Dakota could be strong contender, the 2nd spot in the 200 fly is pretty open (given that Regan Smith doesn’t swim t!)

Katie Drabot is swimming really well this spring/summer and could be headed for a big swim in Korea.