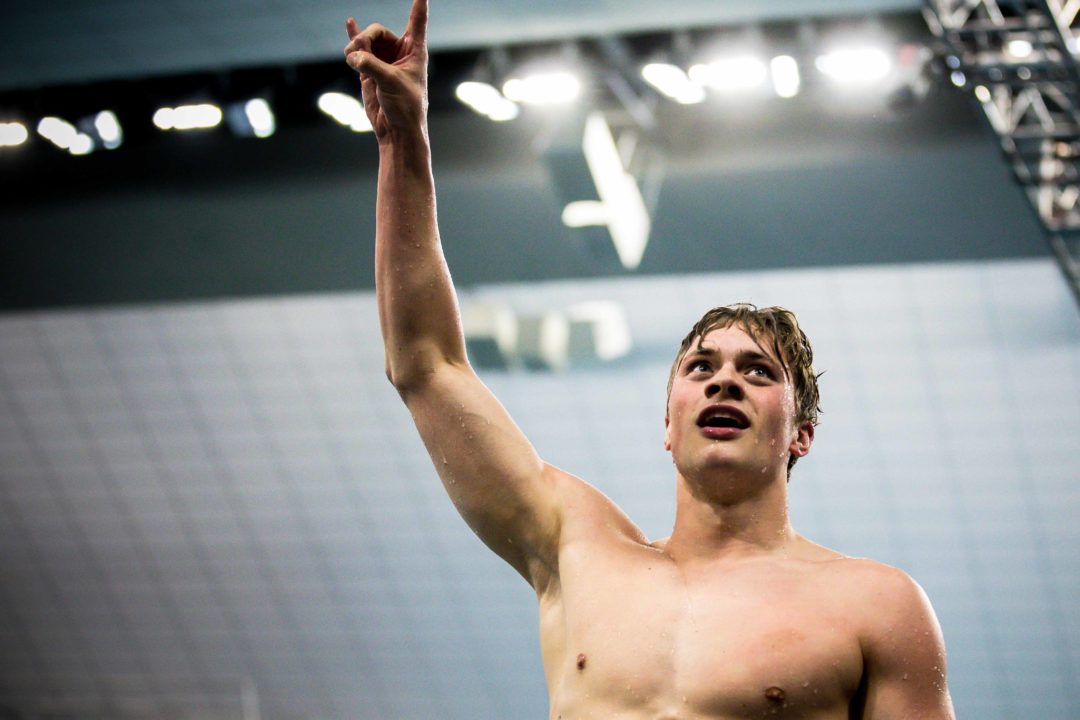 In a surprise move, the United States will use NCAA backstroke champion John Shebat on the butterfly leg of the men's medley on Wednesday night. Archive photo via Jack Spitser/Spitser Photography

American coaches will use John Shebat as the butterfly leg on their 400 medley relay, in spite of him not being selected to the team individually in the 100 fly.

Relay lineups for finals have been released, and the Americans will use:

3 of those legs were predictable: Ress, Finnerty, and Apple were all the top-finishing Americans in the 100m individual events. The 100 fly was not so clear cut. While Americans Coleman Stewart (52.11) and Jack Saunderson (52.25) were 3rd and 4th, respectively, in the individual 100 fly, Shebat reportedly swam a 51.4 in a time trial this week (no social media photos or videos of this one). Shebat, you’ll recall, swam a 200 IM time trial in a 1:58-low after being disqualified in prelims of the individual event: which was expected to be his only race of the meet.

In prelims, Saunderson split 51.99 on a rolling start – still half-a-second behind Shebat’s flat start. Stewart, meanwhile, swam backstroke on the prelims relay, so if the Americans do medal, both butterfliers will get some hardware regardless.

Stewart’s coach at NC State, Braden Holloway, is the head coach of the US men at this meet, while Shebat’s coach, Wyatt Collins, is also on the staff.

This means that Cal swimmer Bryce Mefford, who also has a coach on staff (Chase Kreitler), won’t get a shot at this medley relay. He finished 5th in the individual event in 54.42; Stewart was a 53.85 in prelims, so results indicate that this decision did, in fact, make the prelims relay faster (though it would have finaled comfortably in either case).

Shebat is generally best known as a backstroker in short course – he was the 2019 NCAA Champion in the 200 back for Texas. He’s also a very good butterflier though, in both long course and short course. His official best time of 52.42 in the 100 fly (in prelims, followed by a 52.46 in finals) was good for 11th place at last year’s US National Championships. He also swam the fly leg on Texas’ medley relay at the NCAA Championships last year.

Meanwhile, the American women will use:

None of those switches were any big surprise, though that means Emily Weiss, the only American to make the individual event final (1:09.10 – 8th place), won’t get a shot at finals. Escobedo also swam in prelims where she split 1:06.78 – several seconds faster than either American raced in the individual.

The Americans had the fastest times in prelims of both relays (the women by a substantial amount). The only real challenge in these finals will be the Russian men for the American men: they swapped out their first 3 legs, including adding Grigory Tarasevich on the backstroke leg and 200 breaststroke World Championship medalist Kirill Prigoda to their relay.

The comments in this thread about what Shebat was going to do were delusional, 51.8 flying start. Good prep work, though, guys for the absurd predictions that will come up with Dressel at Worlds.

They’re going for it! Coaches’ prerogative.

Coleman and Jack were on the prelim relay —- gave Coleman a chance for a 100 back time. Now all three guys get a good. Makes sense.

I’ve heard this is a HUGE controversy. Oh wait, that was yesterday. So much for the Braden screwing over UT theory.

Yeah but poor Jack or Coleman who qualified and would have swam same/ similar split but got left off the podium at finals. Bad coaching. No TEAM in Holloway. Unforgivable.

It’s pretty clear Holloway is playing favorites. Some swimmers get to use mythical times. Others held to their actual swim times. He clearly only believes in names that have PR working for them. The relays were going to win. Holloway went for lineups that fracture a team instead of build a team. Buyer beware with that one.

Yeah. If it wasn’t a big deal head coach would not be addressing it in his ONLY interview. It would be a non issue but instead he is trying to explain the rationale. So there is that. If there is smoke there is usually fire.

I get that coaches should use the fastest relay team, but think about the precedent here. If it’s an open competition, at all times, for relay spots, you’re potentially going to have guys – even ones who *should* otherwise be on the relay – auditioning during the meet for relay spots. If someone goes faster in a time trial on a Monday, then you’ve gotta get back up and try to go faster in a time trial on Tuesday, etc. When does it end? You’re gonna have guys time trialing and getting worn out all meet.

No right. If you can’t earn the spot under the same pressure conditions as other kids you don’t deserve it. Will he swim well…probably. But so might have the person that actually earned that spot win it counted. Team USA seems to be easily manipulated.

Welcome to the big time. First of all these aren’t kids They are men and this isn’t age group swimming where The person who qualified always gets the relay spot. At the Olympics the coaches do whatever they’re most comfortable with when it comes to relays. So it’s time for everybody to get used to it .