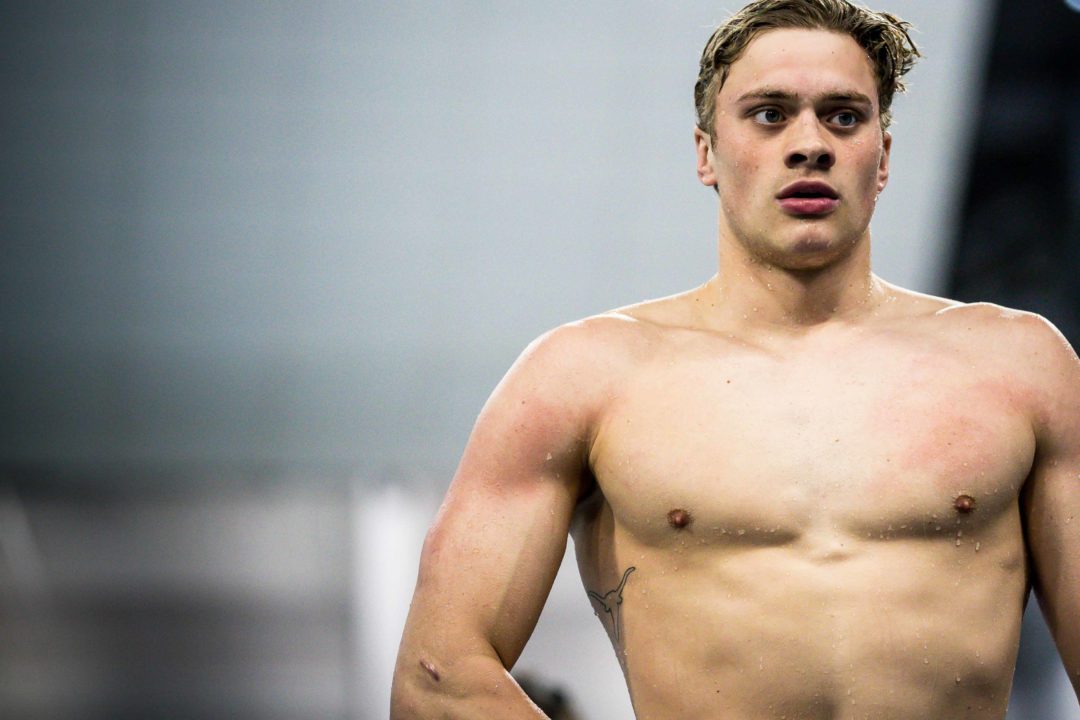 SwimSwam has received video of the early-morning 200 IM race by Texas Longhorns John Shebat and Sam Stewart on Saturday at the 2019 World University Games/Summer Universiade.

This morning, Texas assistant coach Wyatt Collins posted on Instagram that Shebat swam a 1:58.28 in an *unofficial* 200 IM time trial. Sam Stewart, who was racing for Texas until mid way through last season, also swam the race, though Collins’ post made no mention of his swim.

At the time this morning, we didn’t have race video to verify Wyatt’s watch, but now we do. After multiple times to try and get an approximate average, we believe that Wyatt’s watch was right on the number.

In my 3 clockings, I averaged out to a 1:58.29. Robert’s numbers came in a hair slower, 1:58.53, but still within a reasonable margin of error given the angle of the video. Collins can be seen pacing the side of the pool, furthest from Shebat, so his angle wasn’t perfect either.

Ultimately, the time doesn’t count for anything more than confidence and bragging rights, so this all adds up to “close enough” to declare Shebat’s 1:58-low in the 200 IM as a good time. I clocked Stewart about 2.1 seconds behind Shebat, or around a 2:00.4.

Shebat’s time was faster than event champion Juran Mizohata of Japan went in the final (1:58.88), while Stewart’s time would have probably put him 4th or 5th.

Both swimmers, the 2 American entries in the race, were disqualified in prelims. Our reporters tell us that Shebat was called for a 1-handed touch on the breaststroke-to-freestyle turn, while Stewart was called for being past vertical on his backstroke-to-breaststroke turn.

For transparency, here is our clocked data:

That fly leg though!
His 100 Fly at nationals could be real good…

It doesnt count anyways. Only a confidence booster for him and a talking point for us.

It’s not a FINA recognized time. That wasn’t the point. It was John and Sam to see what they could do going 100%

I thought the point was that he got disqualified .. so I’m merely asking whether they checked his technique which got him disqualified to begin with .. otherwise there won’t be a need for a time trial if he didn’t get a DQ

No way that a swimmer of this level would do a one-hand touch. He probably finished the breaststroke leg so fast that the judge did NOT see his touch.

This happened to me my senior year. I had never been DQ’d for a one hand touch in 13 years and and regionals I finish third in the 200IM and they dq me for one hand touch on the first turn. Fly to fly!

My coach tried to protest but the judge said I clearly did a one hand touch.

Insanity. My coach made us to push ups, even in winter, if she caught us one-handing in practice. No way I did that and John feels the same I’m sure.

I love the response. Deserves an up vote for anyone who reads to the end. You’d stop halfway/before the end if you didn’t even partially relate.

Agree! Very unlikely swimmers at this level blatantly touched with one hand. More likely is he touched with two hands, but one hand pulled back so quickly that when the judge looked, there was only one hand on the wall.

A swimmer in Victoria a few years ago was disqualified for touching in breastroke with only one hand . He only had one hand but did not offer such excuses .

Or he got caught up in the nerves of the swim, came into the wall more quickly than expected and accidentally pulled his hand back too fast, before it hit the wall. I’m not an elite swimmer anymore, but after swimming for 25 years, it still happens to me sometimes.

wow, about 34.5 in breast, just like what he went at the Texas taper practice!

Wait, so what was the situation with Sam Stewart and leaving Texas?

Your splits emphasize what Robert and I agreed was the hardest part of this – deciphering when he actually hits the wall on the back to breast turn.