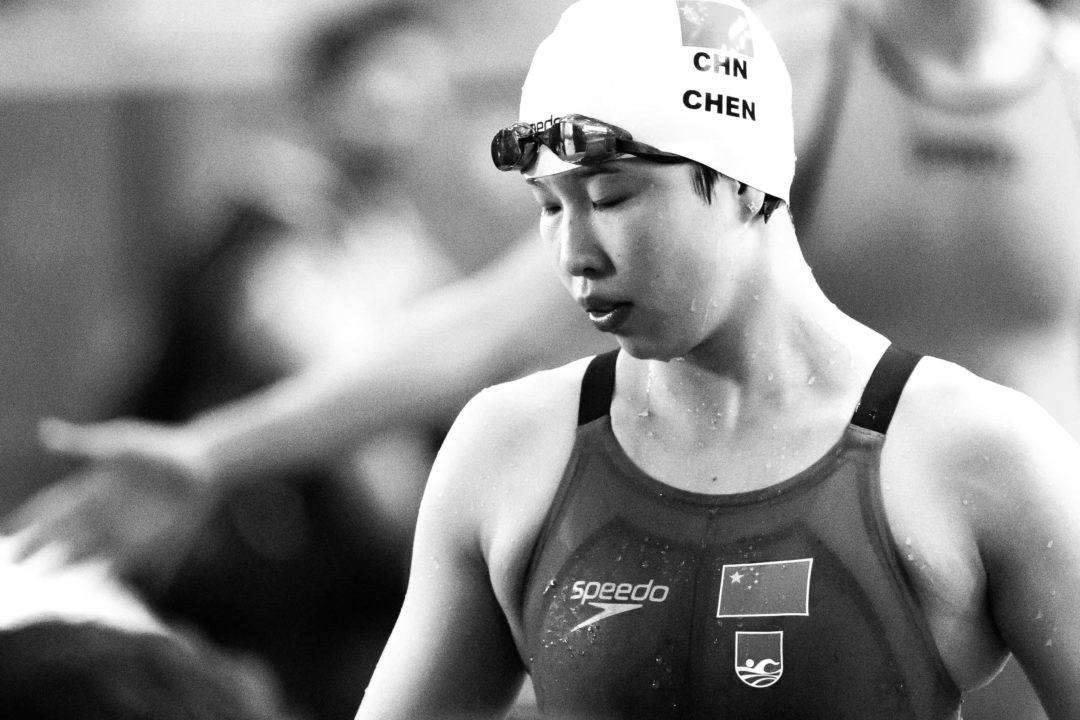 China ran away with the pool swimming team trophy at the 2019 Military World Games, with Chen Jie just one of the nation's 5 gold medalists tonight. Archive photo via Mike Lewis/Ola Vista Photography

The pool swimming portion of the 2019 CISM Military World Games concluded today in Wuhan, China, but not before the host nation ran away with an impressive 49 total medals, including 27 gold, 14 silver, and 8 bronze. The next closest nation in the rankings is represented by Russia, who snagged 27 total medals, including 7 golds, while Brazil finished 3rd in the medal table with 19 total pieces of hardware.

The top 7 finishers in the men’s 200m back all dipped under the 2:00 threshold, led by a big meet record-setting performance by China’s Li Guangyuan.

The World Championships swimmer who placed just 21st in this event in Gwangju produced a solid 1:56.88 here tonight to take over the previous meet mark of 1:58.26 put on the book last year by Germany’s Christian Diener. Splits for Guangyuan include 57.27/59.61 to give him almost a 2-second advantage over runner-up Radoslaw Kawecki of Poland.

China’s Chen Jie denied Pan American Games silver medalist Etiene Medeiros the gold in this women’s 50m back event, taking the top prize in a time of 27.81. That established a new meet record, rolling over Medeiros’ own time of 28.04 set 2 years ago.

Tonight Medeiros settled for silver in 28.29, well off her 27.44 time from Lima, Peru that made her runner-up there. Poland’s Alicja Tchorz got it done for bronze tonight in 28.95 to represent the only other swimmer under the 29-second barrier.

Another standout from this year’s Pan American Games, Leonardo de Deus of Brazil, clinched the gold in this men’s 200m fly event, producing the top time of 1:56.81. That was off his own meet record of 1:55.61 set 2 years ago, as well as off his 1:55.86 scorcher that topped the podium in Peru, but enough to get the job done tonight.

De Deus finished 7th in this 200m fly event at the 2019 World Championships in Gwangju, finishing with a time of 1:55.96. Placing 5th in that final was Denys Kisil of Ukraine, tonight’s silver medalist who put up a strong 1:57.14 in this final. Behind him was Russia’s fly maestro Daniil Pakhomov, who touched in 1:57.46.

Taking down the Military World Games meet record tonight was China’s Yu Jingyo. Yu touched in a mark of 1:07.17 to not only beat tonight’s competition by over a second but also roll right over her teammate Suo Ran’s 2015 meet mark of 1:08.53.

Splits for Yu tonight include 31.50/35.67, giving her a result just over half a second outside of the 1:06.56 she logged in Gwangju to place 5th in that World Championships final.

Sergii Frolov of Ukraine kept up the record-breaking streak en route to gold in the men’s 1500m freestyle event. Stopping the clock in a time of 15:01.82, his gold medal-worthy performance sliced over a second off of Guilherme de Costa’s meet mark of 15:03.35 established back in 2017.

The 10k silver medalist from those World Championships, Marc Antoine Olivier of France, earned silver in tonight’s race in 15:09.22 to pair with his 800m free bronze from this meet.

17-year-old freestyle ace Wang Jianjiahe finished the session’s individual events with a strong outing in the 800m freestyle this evening. Leading wire-to-sire, Jianjiahe produced a winning effort of 8:24.82 to represent the only athlete of the field to dip under 8:30.