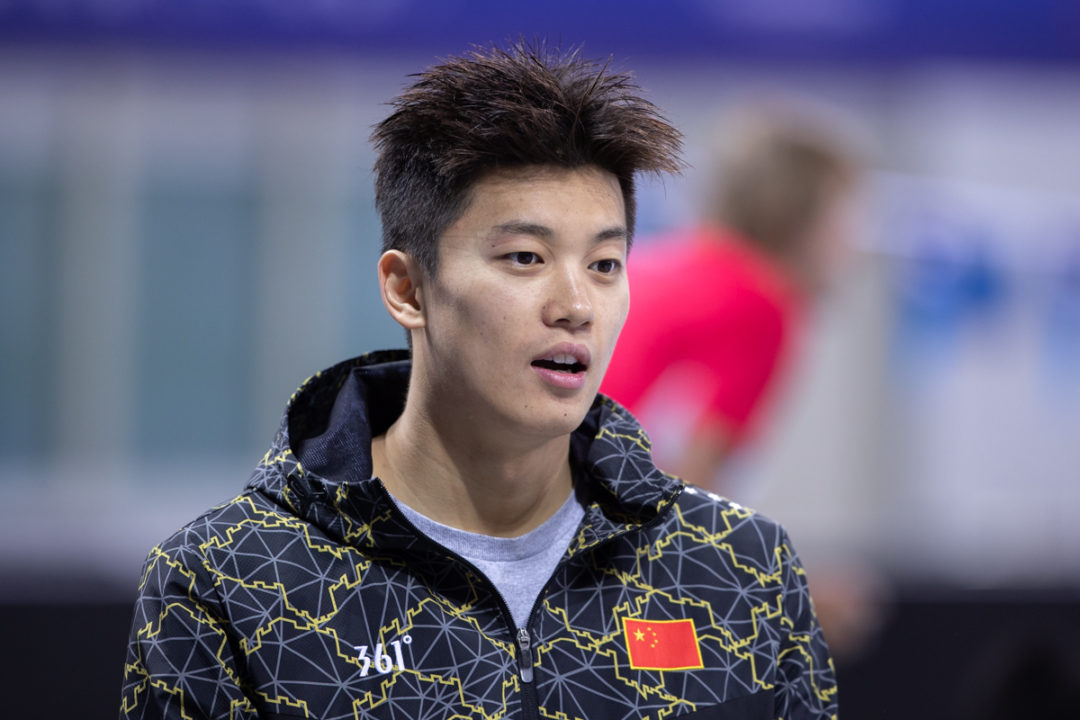 The 2019 Military World Games continued in Wuhan, China, with the host nation remaining atop of the overall swimming medal table. The Chinese squad has earned 22 medals through day 2, including 12 gold, which gives them a monstrous advantage over the next closest nation of Russia.

Russia earned 12 medals through day 2, where Brazil frog-hopped France to enter the top 3 nations with 7 medals, including 1 gold.

The men’s 200m IM saw 2 impressive performances by Chinese swimmers, with both Wang Shun and Qin Haiyang knocking down 1:56’s. Wang topped the podium in a 1:56.25 scorcher, with his time here in Wuhan falling only .09 outside of his own national record of 1:56.16 from the 2017 Chinese National Championships.

Wang took bronze in this 200m IM at the 2016 Olympic Games, registering an effort there in Rio of 1:57.05, so his time tonight dips well inside of that outing.

Following up on her 400m free victory last night in new meet record mark of 4:04.42, Wang Jianjiahe claimed silver in this 200m freestyle event to notch another medal for the host country.

Beating her to the wall by over 2 seconds, however, was teammate Yang Junxuan, who fired off a big-time outing of 1:56.21. Splitting 56.80/59.41, Yang’s podium-topping effort overtook the previous meet record time of 1:57.65 set by French swimmer Charlotte Bonnet in 2015.

Tonight, Bonnet touched in 1:59.15 for 4th place behind bronze medalist Anastasia Guzhenkova of Russia, who landed on the podium in 1:58.93.

Yang’s time now takes over as the top performance in the world early in this long course season.

Russia’s Oleg Kostin put up the 3rd straight meet record of the session, smoking a winning effort of 22.84 to take the men’s 50m fly. That time beat out the previous meet mark of 23.09 set by Henrique Martins 2 years ago.

Kostin’s effort also came within striking distance of his own national record of 22.70 from this year’s World Championships. There in Gwangju, Korea, Kostin took silver in this event.

Kostin now sits as the #1 swimmer in the world in the only time under 23 seconds.

Zhang Yufei was yesterday’s bronze medalist in the 50m free, but she upgraded that result to gold in this women’s 100m fly sprint on day 2.

Stopping the clock in a time of 58.59, Zhang was able to stay ahead of Russia’s Svetlana Chimrova who snagged silver in 58.81, while Brazil got on the board, courtesy of Daiene Dias‘ 59.08.

China continued its dominance with Ji Xinjie taking the men’s 800m free in a time of 7:53.65. That gave him about a 1 1/2 second advantage over Russian Sergii Frolov who touched in 7:55.15 for silver.

Although Brazilian national record holder Jhennifer Conceicao led after the prelims of this women’s 50m breast with a morning swim of 30.94, she was edged out for gold by Chinese swimmer Suo Ran come the final. Ran touched in 30.74 to Conceicao’s 30.91, as both represented the only swimmers of the field to get under 31 seconds.