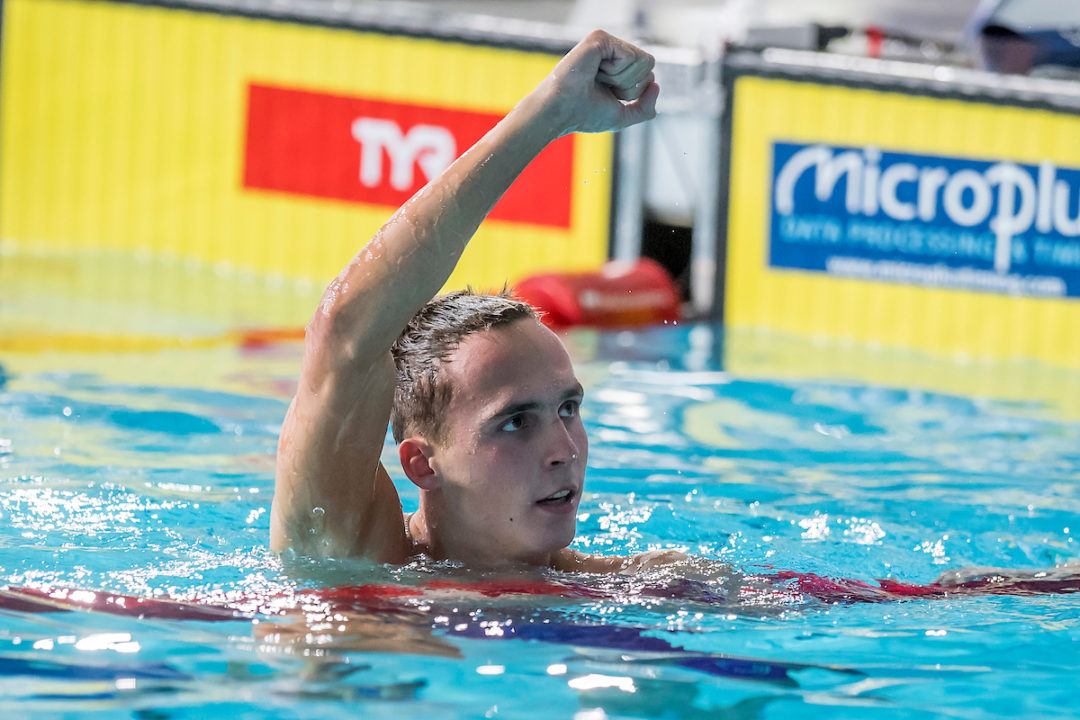 Today represented the first finals session where China did not outright dominate the gold medals divvied out at the CISM Military World Games. Although the nation did reap the top prize in the men’s 400m free, women’s 200m breast and women’s 4x200m freestyle relay, other nations such as Russia, Brazil and France got a turn to hear their anthems play on day 4 in Wuhan, China.

Nevertheless, China remains ahead of the pack in terms of overall medals with just 1 day of swimming competition left. The nation owns a remarkable 41 total medals, including 22 gold, to make them uncatchable as the team trophy winners by the time competition concludes tomorrow.

Russia’s national champion in the men’s 100m free, Vladislav Grinev, turned up the heat to kick-off day 4 in Wuhan. The 23-year-old nailed the only sub-48 second time of the field this evening, stopping the clock at 47.86 to take gold in a new meet record time. His performance overtook the previous meet mark of 48.25 held by Brazil’s Pedro Spajari since 2017.

Tonight, Spajari settled for silver almost a second behind Grinev, producing a time of 48.75 for runner-up. Poland’s national record holder, Kacper Majchrzak, racked up a bronze for his nation, earning 3rd place in 48.99.

Grinev was the bronze medalist at this year’s World Championships in Gwangju where he touched in a time of 47.82. That was well off his lifetime best of 47.43 logged at the Russian National Championships earlier in the spring.

Melanie Henique of France carried on the meet record-breaking trend, topping the women’s 50m fly podium in a time of 25.96. Notching the only time of the field tonight under 26 seconds, Henique’s result logs a new meet record, overtaking the 26.72 Anna Dowgiert set in 2015. Dowgiert finished 4th this evening in 26.72.

China’s Zhang Yufei reaped silver in the race, touching in 26.20, while Daiene Dias of Brazil rounded out the top 3 in 26.66.

The men’s 50m back saw Brazilian Guilherme Basseto get his hand on the wall first, clinching the gold in a mark of 25.34. That edged out Frenchman Jeremy Stravius by just .02, while a tie ensued for the bronze.

Italy’s Niccolo Bonacchi and Russia’s Roman Larin each touched in 25.51 to become co-bronze medalists in the race. The meet record holder, Tomasz Polewka of Poland, was disqualified.

Another meet record bit the dust tonight, courtesy of French swimmer Fantine Lesaffre. In the women’s 400m IM, the 24-year-old World Short Course bronze medalist in the event clocked a winning effort of 2:12.07 to top the field by well over a second.

Lesaffre’s time overwrote the previous meet record she set this morning, which was represented by her heats swim of 2:12.78. That time had replaced Vietnam’s Thi Anh Vien Nguyen‘s meet mark of 2:13.87 from 4 years ago.

China got on the board with Chang Yang‘s effort of 2:13.37, a time that edged out Russia’s bronze medalist tonight, Viktoria Beliakova and her time of 2:13.72.

Despite the men’s 400m free final being on the sluggish side, with just 2 men dipping under the 3:50 threshold, China’s Ji Xinjie established a new meet record en route to gold. Stopping the clock in 3:48.33, Ji’s time overtook David Aubrey’s previous meet record of 3:49.76 set in 2017.

Yu Jingyao got it done for China in the women’s edition of the 200 breast, registering a winning mark of 2:23.06. That was quicker than the previous meet record of 2:27.31 set by tonight’s silver medalist Mariia Temnikova of Russia back in 2007.

This evening, Temnikova, too, got under her own meet record, touching in 2:26.05 to land on the podium.

Yu’s time tonight lays waste to the 2:26.77 she produced for 17th at this year’s World Championships.

Russia’s World Champion Anton Chupkov was unstoppable in this men’s 200m breaststroke, beating the field by just under half a second. Splitting 1:03.43/1:04.52, Chupkov produced a winning effort of 2:07.95 to comfortably stay ahead of the silver medalist her in the 200m and 400m IM, Qin Haiyang of China. Qin hit the wall in 2:08.41 this evening.

Chupkov raced his way to a monster new lifetime best mark of 2:06.12 to claim gold in this event in Gwangju, establishing a new World Record in the process.

the guy is too good , even in October

Is Chupkov actually in the Russian military?? Is he not exempt? Genuinely confused here.

It does seem odd that a lot of these high-profile swimmers appear to be “in the military”. Whereas few (or probably none) of the GB squad are in the military and it’s similar for the US squad. What it seems to come down to is how each country defines a military role. I am sure that some of the French swimmers competing are police officers in any other country (yet qualify for this competition) and I can only assume that Russian public-sector office roles are also classed as being “in the military”. Happy to be corrected…

All of the US swimmers ARE currently serving in the military: Navy, Air Force, Army, and Marines are represented on this squad. Enlisted and officers. They fit in their training to make the USA squad around their full time military role.

It looks like the military and national team are more closely connected in some countries, like Russia, China, Brazil, Poland and France, as you mentioned. I’m sure Florent Manaudou was once a member of French military too. Don’t know whether he’s still in.

I recall some German swimmer was looking forward to his national service as he would be supported. Im sure they still have to do some military stuff . Militaries are a world of their own , I mean who is going to argue?