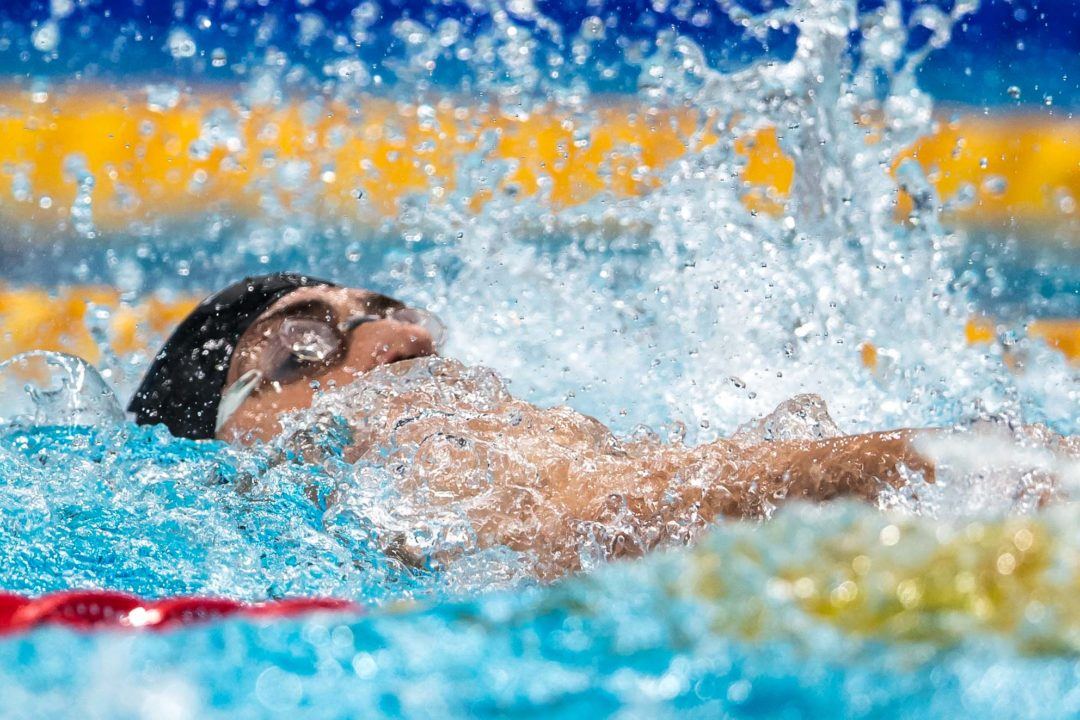 Guilherme Guido was the under-the-radar MVP of the Lewisville ISL meet, besting Ryan Murphy and Matt Grevers in both the 50 and 100 backs. Archive photo via Mike Lewis/Ola Vista Photography

This weekend will feature ‘Group B’ in a rematch of last week’s Lewisville contest, won by the London Roar. Here’s a look at the rosters for the coming week:

Roar is too stacked. They definitely need a redraft or some kind of new way of picking teams for next season

I know. It’s pretty impressive that they can still win pretty dominantly even without 4 of the Brits and Mireia Belmonte.

Everyone was underestimating the depth of the Aussie contingent in London Roar, but they’re carrying the team.

Yeah, some of those young swimmers have been incredible. I’d love to be able to capture what it was that’s making that group swim so well. They’re even outperforming their more renowned Australian counterparts on other teams.

It’s really not surprising when you think about it closer. The four American teams essentially have to split all the American Swimmers between them. As dominant as American swimming is, it’s not gonna beat most of Australia and England together. Energy Standard is essentially Europe minus the Brits, Italians, and Hungarians. I’d love to see more Asian swimmers get involved and hopefully make the league more competitive. Love watching it anyway, hope the Trident go to Vegas

This is exactly what I was thinking. Besides the USA, Australia probably has the most depth of any country in the world, and London Roar snapped up half of the Aussie swimmers in the league (and most of their best swimmers). With that being said, I don’t get why the USA gets four ISL teams and Australia gets zero.

I think the answer was *logistics.* In year 1, they didn’t want to deal with laws in 3 different jurisdictions simultaneously, and adding Australian travel to the USA-Europe travel scheme would have been a nightmare.

The league needs another “conference” of Asian & Australian teams. Playoffs reduce this conference to 1 or 2, which meet the top 1 or 2 from a conference of the existing teams in a championship. Only trans-pacific travel is for the championship.

I think they will add an asian/Oceania group next if this proves viable.

Melbourne, Sydney or Brisbane, Tokyo and a 4th city in Asia.

They’ll for sure need Asian buy-in to the series before heading out that way. I think Asia views itself as having more to lose both with a lack of Olympic focus, and with a rift with FINA/IOC (which is where this is headed – not just FINA, but the IOC as well). Expanding the league without Asia jumping on board would be really challenging. At least in the interim, before more swimmers are able to ‘extend their careers’ and deepen the talent pool available for ISL from other regions.

The same reason Australia gets overlooked for hosting a lot of things. Location. Too far away from everyone else. With the current arrangement only Australian swimmers have the horrible travel inflicted on them rather than half the league. Timezone is also against us. If you have a look at the current session times you’ll notice they’re carefully chosen to maximise viewing in Europe and America but not in East Asia/Oceania. Unless they can bring Asian swimmers into the league a match in Australia would have very little live American viewership and little Asian viewership to compensate and would have less than desirable viewing time in Europe as well.

I recall a comment section here where people were discussing which teams are strongest and everyone was salivating over Cali Condors, Energy Standard and LA Current with barely a mention of London Roar.

Because people are silly.

I think Energy and Cali condors will perform better than LA and ROar in the skins which will help, but across the board London Roar are loaded.

I remember the comments that doubted whether London Roar would even make the final, once they lost a few British swimmers!

The Breakers: We’re the worst team in NY.

The Jets: Hold my beer.

Jets vs Patriots in a swim meet? I’d pay to see that!

Idk I think DC could beat Iron later in the season. When all the Indy swimmers are shaved and Ledecky is back at least

I think Iron would beat DC Trident. They have similar strengths in long distances but Iron has skins race stars as well in Morozov and Kromo, while DC doesn’t.

Unfortunately for DC, Ledecky can really only help with three individual races, where she’s the favorite for only one of them (400 free), and she doesn’t boost the relays.

Too bad we probably won’t see this head-to-head.

Ledecky could bust out a first place 200 honestly

Eh, they have Haughey, so DC don’t really need Ledecky to take first.

those teams will never meet this season. they’re in different groups and continents, and it would be a huge upset if both teams made the finals

Agreed, but I think Cali Condors vs. LA Current is close and could go either way. I suspect LA Current might even have the edge.

Cali are better in the skins, so they will win.

Not necessarily. Iron won both skins in Lewisville but only came third overall. Cali’s men’s team outside of Dressel and Larkin is rather weak, to say the least.

It’s too bad for Iron, because with the Current’s missing swimmers, they could easily place 2nd this week in Budapest, and yet they have virtually 0 chance of catching Energy Standard or London Roar and making the final.

As for the time, keep in mind that Summer Daylight ends in Europe this weekend, So Saturday 12 pm and Sunday 1 pm EST