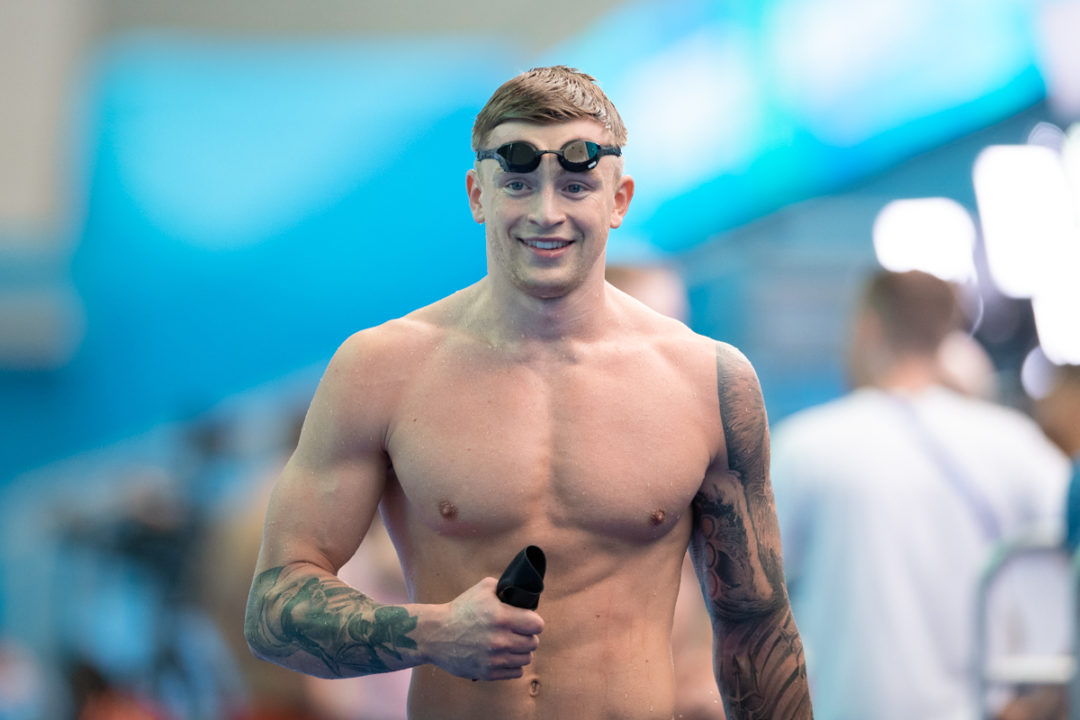 ISL ambassador Adam Peaty (above) will make his league debut this weekend in Budapest, Hungary, alongside Mireia Belmonte and James Guy. Archive photo via “Rafael/Domeyko Photography”

The reinforcements are arriving for the London Roar for week 2 of the International Swimming League – not that they really needed any. After beating the LA Current by 27.5 points in Lewisville last weekend, the Roar will head into week 2 even stronger. With the Current roster getting weakened for the team’s 2nd meet due to some key absences, like Kathleen Baker, week 2 could turn into a runaway for the Roar.

Peaty missed last week while with Marshall and another group on a training camp in the United States. Guy, meanwhile, didn’t attend the British training camps that kept most of their swimmers out last week, but instead was in Manchester racing at a local meet, which was also in short course meters.

As for Belmonte, no official word was given as to why she missed the Lewisville meet, though she did pull out of a FINA World Cup meet a week earlier with stomach issues. Belmonte has battled ongoing health problems over the last couple of years that has limited her success at meets like the World Championships, but her versatility, especially across events like the 400 IM, 200 fly, and 400 free, that are fairly thin internationally, will still play a big role for the Roar.

Even as great as Peaty is, to match Wilson’s multitude of contributions he’ll probably have to swim the 200 breaststroke in addition to his preferred 50 and 100 meter distances. He’s not as good in short course as he is in long course, so he is beatable in both of those events, though he’ll be the favorite due to his starpower.

Belmonte and Peaty have been named the team’s co-captains for the meet.

Watched this guy train at Pine Crest for three weeks. One take away from that is he is perfect!!! He is perfect in what he does before, during and after practice. Total pro with an amazing ability to make it seem easy while doing incredible things on daily basis. Class act as well awesome role model for our kids. All the best AP!!!

I was looking forward to seeing Duncan Scott on the team this week. 🤷‍♂️

Hibbott is one of the few members of the Roar that is not Australian!

My initial thoughts were the same, this swap won’t actually impact their scoring all that much. That being said, Current got weaker for sure, so it probably won’t matter.

Did we leave Duncan Scott in Korea to protest against Sun Yang?

British swimming released pictures a couple of days ago which seemed to show that Scott and O Connor are still at the training camp in the US.

Guy and Peaty should be very helpful additions to London Roar in terms of helping them extend their lead. Belmonte is a bit of a question mark though as she seemed out of shape at worlds and then a couple of weeks later she did some decent times at the World Cup. Therefore, it’s hard to get a gauge on what sort of shape she is in.

Belmonte seems to be struggling with injuries. As you said she seemed off at Worlds but was looking much better relatively soon after

Belmonte is a great enigma. Everything around her is obscure. But one thing is true: she wants the Olympic bill next December in Amsterdam. Don’t expect much from her now.