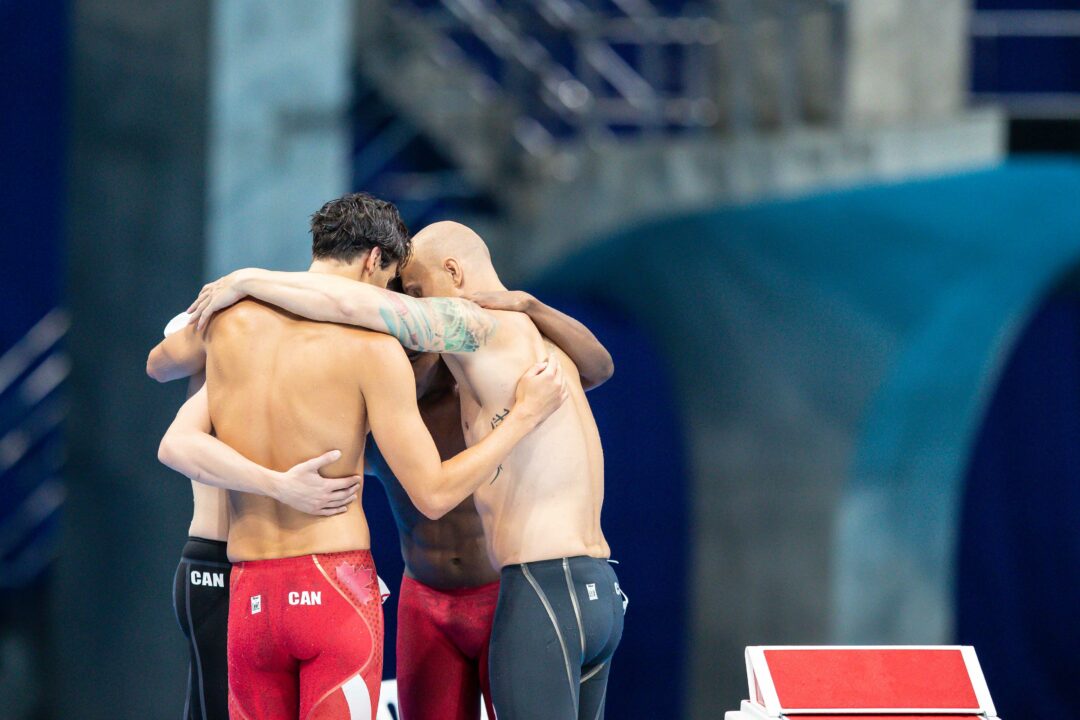 Neither of the Tokyo 2020 Olympians are entered to race at Canada's upcoming selection meet in Victoria, British Columbia. Archive photo via Jack Spitser/Spitser Photography

The psych sheets have been released for the upcoming 2022 Canadian Olympic Swimming Trials. This meet will serve as “the selection Trials for the 2022 Commonwealth Games, 2022 World Para Swimming Championships, and additional international events.”

All 14 of the women and the majority of the men who represented Canada at the Tokyo 2020 Olympics will be in action at the meet vying for selection. Among those not entered to swim are multi-Olympians Markus Thormeyer, Brent Hayden, and Cole Pratt who all swam for Canada in Tokyo.

Both Hayden and Thormeyer played a part in Canada’s 4th place finish in the men’s 4×100 freestyle relay at the Tokyo Games. They, along with Josh Liendo and Yuri Kisil posted a 3:10.82 Canadian record at the meet to trials Australia’s 3:10.22 swim for third.

Thormeyer has not raced since the games and Hayden competed at a few ISL matches during the fall before calling an end to his short course season due to a back injury.

Canada raked in 6 medals at the Tokyo Games, courtesy of Penny Oleksiak in the 200 free, Maggie MacNeil in the 100 butterfly, Kylie Masse in the 100/200 backstroke, and the 4×100 freestyle and medley relays.

Oleksiak is sticking to her signature events at Trials and is entered to race the 100 freestyle, 200 freestyle, and 100 butterfly. She’s the top seed in both the freestyle events, but sits at #4 in the 100 butterfly (the event in which she won silver in 2016).

Maggie MacNeil is #1 in the 100 fly as one of history’s fastest performers in this event. MacNeil is the fastest Canadian in history, having swum a 55.59 national and continental record to win gold at the last Olympics. She is also the reigning world champion in this event as she took gold at Gwangju 2019 in a 55.83.

MacNeil is coming off her final NCAA season at Michigan but recently announced that she will be using her 5th year of eligibility at Cal during the 2022 – 2023 season. MacNeil won two medals at NCAAs this year, collecting bronze in the 100 butterfly and 100 freestyle.

Another NCAA standout, Taylor Ruck, will be racing at Trials this year and has entered the 100 and 200 freestyle and backstroke. Ruck broke out internationally in 2018 when she won 8 Commonwealth Games medals and 5 Pan Pacs medals but faced a decline in high-level success in the years that follows. Ruck has spoken candidly about the eating disorder that she suffered with during that time, impacting her performance, and has reported that she is on the “other side of that struggle.”

One of Canada’s most consistent stars in the past few years, Kylie Masse, is the favorite to win both the 100 and 200 backstroke, having taken silver in both events at Tokyo 2020. She holds both Candian records in all the long course backstroke events.

In both the 50 and 100 backstroke, however, Ingrid Wilm will be one to watch following her short course breakout. Wilm broke a Canadian record in the short course 100 back in September 2021 with a 55.61, but Masse took it back a few months later by swimming a 55.22 at Short Course Worlds.

But in the winter of 2022 McIntosh broke onto the elite IM and butterfly scenes, downing world junior records in both the 400 IM and 200 fly. McIntosh hit a 4:29.12 WJR in the IM to become the 3rd-fastest swimmer in history and swam a 2:05.81 in the 200 fly. As the favorite to win in many events, it will be interesting to see what she focuses on moving forward.

Josh Liendo wrapped up his 2021 season with bronze medals in both the 50 and 100 freestyles at the 2021 Short Course World Championships. He also raced at the Olympics in 2021 and reached the semi-finals in the 100 freestyle with a 48.19. Teammate Yuri Kisil also swam in the semi-finals and wound up finishing right behind Liendo in a 48.31. Both Liendo and Kisil will be battling it out for qualification in the 100 freestyle as 1st and 2nd seed, respectively.

Looking forward to that W 200 free. The field is stacked

They should challenge China, USA and Australia in that 4×200 free relay.

Australia will be missing McKeon and Titmus at Worlds so could very well get pushed off the podium but they’ll be back at full strength for Comm Games.

Titmus is going to be at Worlds.

Are you guys going to do an article on the psych sheets for British Champs?

What does the S mean next to seed time? I assume it’s that they qualify based on a SCM time instead of an LCM time? I was shocked to see Maggie MacNeil not entered in the 50 back but then saw her way down the list in the 30s.

So did she just now change country representing from USA to Canada?

Excuse my ignorance, but is Claire Tuggle a Canadian Citizen? I thought I heard of a 16 year old 200 Free semi finalist possibly swimming at Canadian Trials

You are thinking of Kayla Wilson

McIntosh is going to dominate the 200 Fly!

Great summary thank-you Swimswam!
Would be great to hear some insight regarding those 3 gents. Thormeyer did compete late fall but not sure who is training with/how the VAN HPC is running right now. Pratt injured in the fall? Hayden… He’s earned the right many times over to do what he wishes! Whether it’s a bit of a recovery break, reassessment, or simply (re) retiring… Legacy cemented!!